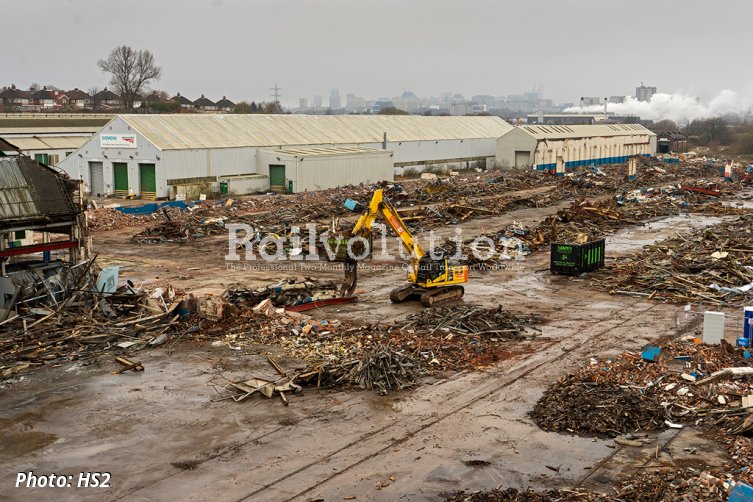 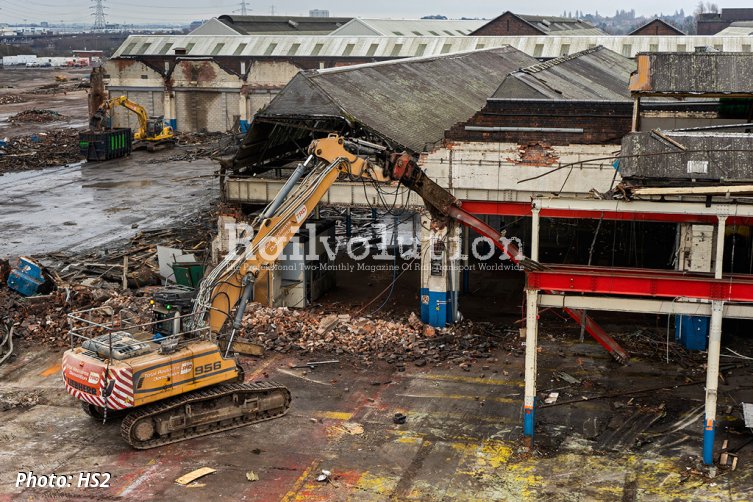 Ahead of High Speed Two (HS2) Limited beginning construction of a train maintenance depot in Washwood Heath, demolition of a former railway works in Birmingham is now well underway. The demolition covers a site larger than 110,000 m2 and is being carried out by HS2 Ltd alongside their early works contractor, Birmingham-based LM JV.

The site at Washwood Heath was originally home to a depot that measured 782,622 m3 of buildings and structures, and these are now in the process of being demolished. This has yielded a total of 412,464 tonnes of demolition materials - the equivalent weight of 68 Birmingham BT Towers - and this will be predominantly reused on site, significantly reducing the need for landfill and lorry movements.

Mike Lyons, Programme Director of Phase One in the Midlands said: „As we prepare for the construction of HS2, there is a huge amount of work going on at sites in the Midlands, including land clearance, habitat creation, tree planting, demolitions, archaeology, road improvement works and utility diversions. We currently have 62 live sites across the whole Phase One route, servicing over 250 work locations. Over 7,000 jobs are supported by HS2, and over 300 companies in the Midlands are already working on the project.”

HS2 trains will be maintained at Washwood Heath, and activities at the facility will include cleaning, servicing, and routine repairs of the new high-speed fleet. The depot will employ up to 500 staff working in shifts, either in jobs within the depot, maintenance and support workers, or train drivers who will start and finish their day there. It will be HS2’s only rolling stock maintenance depot for Phases One and 2a of the UK’s new high-speed rail network.

Formerly known as the Washwood Heath Railway Works, the site was last used by Alstom. It is the preferred location for HS2’s future depot because it is centrally located in relation to the completed HS2 network, which will extend to Leeds and Manchester.