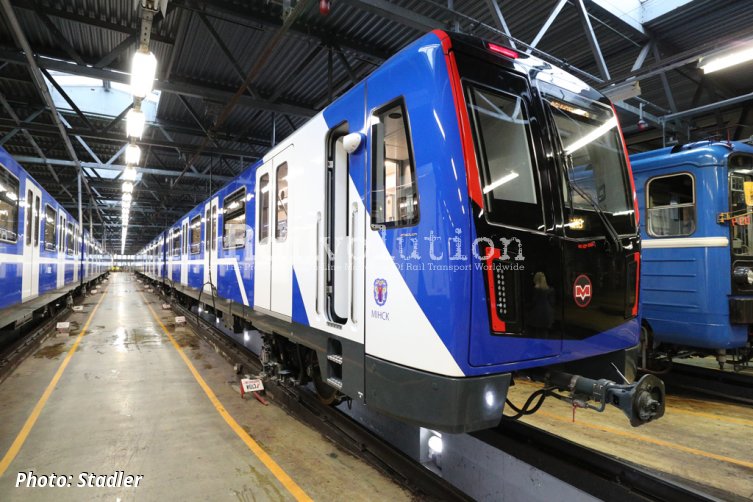 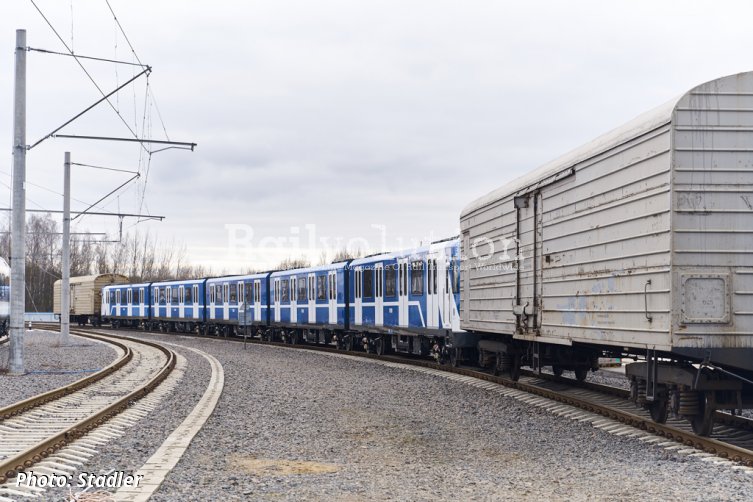 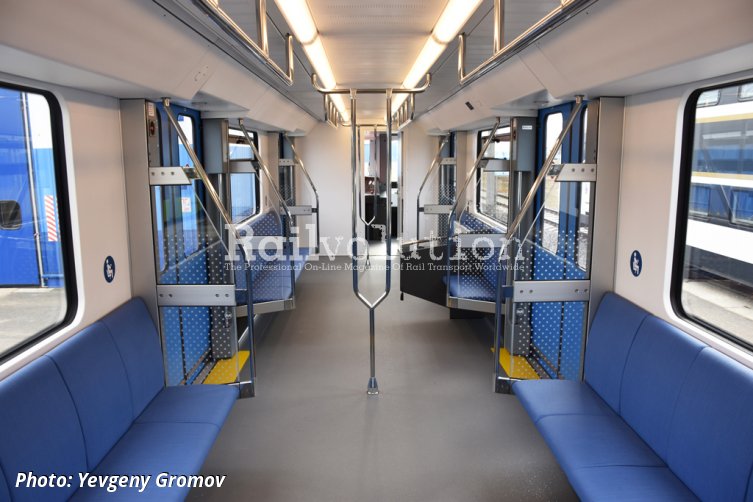 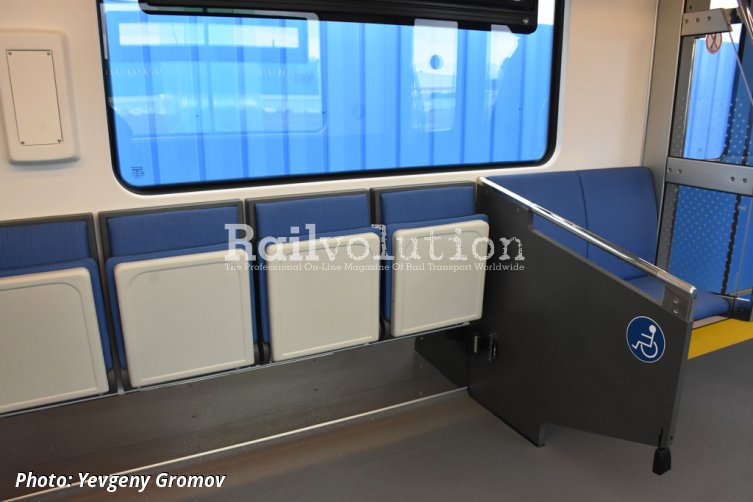 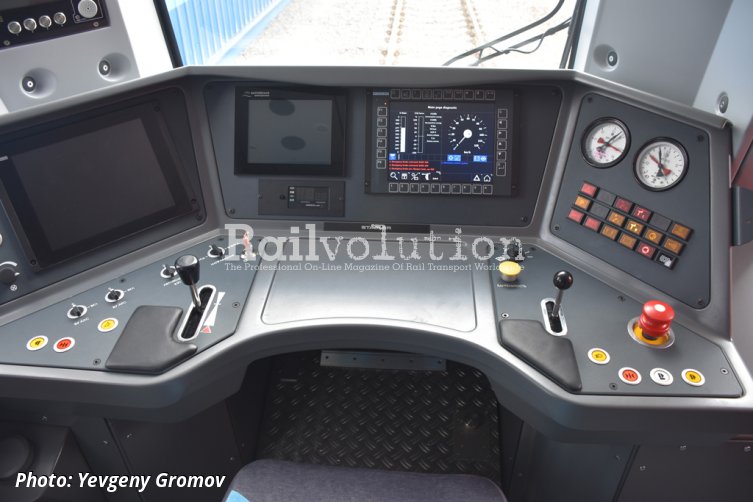 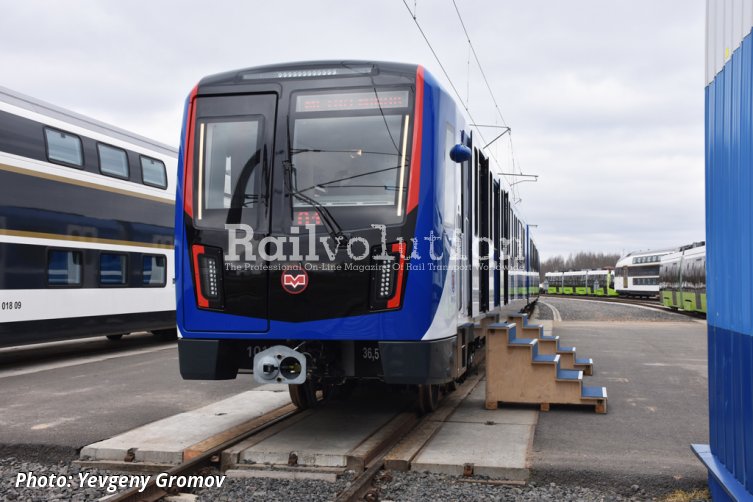 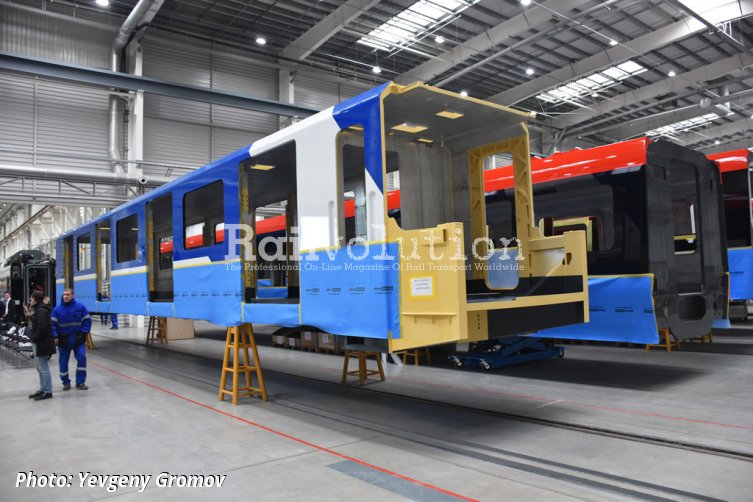 In January 2017 Minsky Metropoliten ordered 10 Model M110 trains - six four-car and four five-car. Six of these were delivered in 2019 and the remainder will follow in second quarter of 2020. On 5 February 2020 the first four-car unit started test commercial passenger service on Line 2.

In developing the new metro trains, Stadler’s engineers paid particular attention to their colour, graphic design and exterior appearance, to create an original and striking image associated with the city of Minsk and Minsk Metro, as well as to emphasize the high technical standards of the new stock. The livery of the trains reflects the colours of the Minsk coat of arms - blue, white and red, while the interior design is dominated by the sensitive use of light shades, concise forms, and the creation of an integral space.  The trains are designed according to modular principles. At the complete train level this means the possibility of creating formations in lengths of between four and eight cars.

All the cars have aluminium alloy bodyshells with a design lifespan of 50 years, and are 2,650 mm wide and 3,690 mm high above rail top. Sound-absorbing materials are incorporated in the design of the bodyshells, effective both within the passenger accommodation and the cabs to reduce noise levels. The bodyshells do not incorporate crash absorption structures, because their structure consists of a rigid body constructed with lightweight aluminium, which can absorb the defined static and dynamic forces for the guaranteed life cycle time.

The asynchronous traction equipment is designed to be compatible with a voltage range of between 550 and 975 V DC. The converters are produced by Stadler itself. This reflects the fact that in 2018 changes in the ownership structure of ABB occurred, this company having hitherto been Stadler’s privileged supplier of traction equipment. The ownership changes involved Hitachi buying the division of ABB which also produces traction transformers for rail vehicles, and there were also other changes. At Fanipol Stadler therefore built its own factory to engineer and manufacture power converters for light rail vehicles. The first vehicles fitted with these are the St. Peterburg Chizhik trams.

Each car has four pairs of 1,400 mm wide, double-leaf entrance doors, accessing spacious vestibule areas, designed for speedy alighting and boarding. The actual thresholds are coloured yellow, for ease of visibility and to enhance passenger safety. All seating is longitudinal, inwards-facing, to ensure that space for standees is maximised. The end cars have multi-purpose areas, equipped with wheelchair spaces and tip-up seats, adjacent to the entrance doors near the driver’s cab, and fitted with passenger-to-driver intercoms for emergency use, installed at an accessible height. Intercoms are also provided in the well-illuminated inter-car gangways, which are fitted with handrails.

The passenger accommodation and driver’s cabs are fully air conditioned. CCTV digital cameras are positioned on the outside of the end cars, monitoring activities at the entrance doors at stations, so that the driver can watch passengers boarding and alighting. There is also an interior digital CCTV system, with four cameras in each car. USB sockets are provided in each car in convenient locations for recharging personal electronic devices.

The M110 trains are fitted with GoA 2 ATO, this intended to enhance operational safety and reduce energy consumption, with automatically programmed acceleration, braking and stopping, while maintaining pre-programmed schedules. All stations on Minsk Metro’s new Line 3 are therefore fitted with platform doors. The driver’s cabs are fitted with emergency doors, from which folding telescopic ramps descend, enabling safe and rapid passenger evacuation. The trains are covered by a warranty for the first 560,000 km of operation.

On 20 March 2019 at its Minsk (Fanipol) works Stadler and Minsky Metropoliten presented the first Model M110 metro train. The first four-car unit was moved from Fanipol to Minsk on 1 April 2019, and was subjected to testing on Line 2, until September. Certification was not necessary for the new type, because the tests carried out aimed to confirm the compliance of the construction for the Minsk metro with safety requirements. The result of the tests was the signing of an acceptance commission act stating that the construction of the M110 four-car unit met safety requirements. That happened at the beginning of November 2019.

Until the end of 2019 Stadler delivered all six four-car trains and in early February 2020 the first of them started commercial test service with passengers. The first five-car train is undergoing now a number of tests for some characteristics at Minsky Metropoliten depot infrastructure. The four five-car units will be delivered during the second quarter of 2020.

Although the new Model M110 trains are tested on Line 2, they will be used to provide services on the capital’s new 17.2 km Line 3, from Zialiony Luh (in the northeast of the capital) to Kurasoushchyna (in the south). The first phase of Line 3 was initially scheduled for inauguration later in 2019, now the date is set for July 2020.

Minsk Metro is currently considering the acquisition of more new metro trains from Stadler to replace those currently used on Lines 1 and 2.