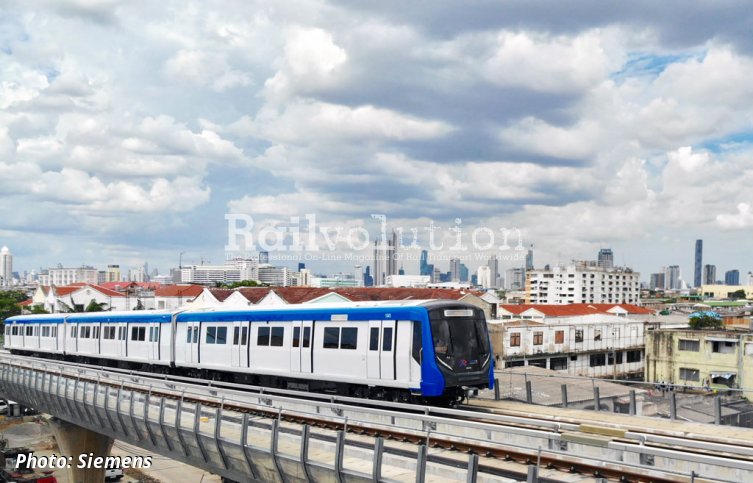 The fully completed Blue Line Extension adds 28 km of track, 19 new stations, and 35 additional three-car trains. The completed extension will now allow the Blue Line to carry approximately 500,000 passengers per day and seamlessly connects the Thonburi side of the Chao Phraya river to the rest of the city which suffers from traffic congestion. The initial Blue Line in Bangkok was also delivered as a turnkey rail system by Siemens Mobility in 2004 and was the first underground metro line in Thailand's capital, with around 320,000 passengers a day using the 20-km metro line with 18 stations.

Siemens Mobility was awarded the contract for the expansion in 2017. In July 2019, the Blue Line started a public demo run on the first section of the extension from Hua Lamphong to Tha Phra - three months ahead of schedule. In September 2019, revenue service was launched on a key section of the extension, which included BEM operating new metro trains delivered by Siemens Mobility. The metro trains delivered for the extension are an evolution of the ones used on the original Blue Line, most notably they can carry more than 800 passengers and operate up to 80 km/h. They were manufactured in Wien and tested in Germany prior to being shipped to Thailand.

Siemens Mobility has previously completed three high-performance turnkey rail systems for Bangkok. In addition to the Blue Line, which has been operating since 2004, Siemens Mobility delivered the Skytrain and the Airport Rail Link. Furthermore, in 2016, Siemens received an order for 22 four-car metro trains to operate on the city's Green Line, which went into operation in December 2019.