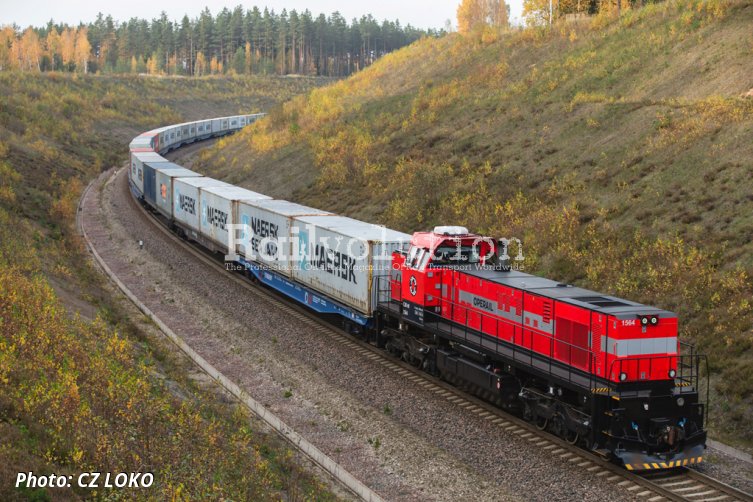 CZ LOKO signed an agreement with the Estonian operator Operail (until 2018 known as EVR Cargo) for kits to be supplied for the comprehensive rebuilding of six more Class C30-7Ai diesel locomotives, bringing the number of such rebuilds up to 13.

The six-axle Class C30-7Ai locomotives were built by GE Transportation Systems for heavy duty shunting and main line use in the USA. In 2003 19, following modifications, were moved to Estonia for use by Eesti Raudtee, which eventually became EVR Cargo.

The rebuilds, above underframe level, are to be carried out at Operail’s works in Tapa (in northern Estonia), in partnership with CZ LOKO, which will supply the kits of components required. These include the new prime movers, the traction alternators, the driver’s cabs, bonnets, braking and control systems. Following rebuilding the locomotives are re-designated Class C30-M. By subjecting the C30-7Ai machines to this substantial rebuild, it is anticipated that their working lives will be extended by a further 20 years. The completed rebuild is designated Type C30-M, „M“ standing for „modernisation“.

The modernisation involves the retention of the underframe, bogies with the nose-suspended DC traction motors and the 14,100 litre fuel tanks, and the provision of new bonnets and driver’ cab, CZ LOKO’s modular designs being used, as is the case with the propulsion unit. The original prime mover, a 16-cylinder GE 2,200 kW Type 7FDL16 diesel engine linked to a Type GTA11 generator, are replaced by a 1,550 kW Caterpillar 3512C Euro IIIA-compliant diesel engine, linked to a Siemens Type 1FC2 631T traction alternator and a Siemens Type 1FC2 631P auxiliary alternator.

While the top service speed is reduced from 125 to 100 km/h, the tractive effort remains almost constant, falling from 438 kN to 436 kN. Tare weight was substantially reduced - from 180 t to 138 t. One important new feature is the installation of an electrodynamic brake. This can operate in two modes: one is at 1,020 kW, and serves for checking speed when on descending gradients, the other is a stopping mode, and is rated at 1,790 kW. New electric auxiliary drives, a new Mattei Type 111H compressor and a new control system supplied by MSV elektronika, enabling multiple operation, were installed. The new components are to be prepared at CZ LOKO’s Jihlava works, and then despatched to Tapa for installation. Their delivery is scheduled until first quarter of 2021.

This is not the first time that EVR Cargo/Operail has made an attempt to modernise its locomotive fleet. In August 2011 it placed an order with CNR (now part of CRRC) for 16 six-axle Type DF7G-E diesel shunters. The first prototype, DF7G-E 001, arrived in Estonia in October 2012 and started testing, later together with DF7G-E 002 delivered in October 2014. However it was not possible to obtain type authorisation, so the order was cancelled before batch production could start.