The two businesses are largely complementary in terms of activities and geographical extent. Siemens will receive newly issued shares in the combined company representing 50 % of Alstom’s share capital on a fully diluted basis and warrants allowing it to acquire Alstom’s shares representing 2 % of its share capital. Joe Kaeser, President and CEO of Siemens AG stated: „This Franco-German merger of equals sends out a strong signal in many ways. We put the European idea to work together and with our friends at Alstom, we are creating a new European champion in the rail industry for the long term. The global marketplace has changed significantly over the last few years. A dominant player in Asia has changed global market dynamics and digitalization will impact the future of mobility.“

The new entity, which will act under the corporate name Siemens Alstom, will benefit from an order backlog of 61.2 billion EUR, revenue of 15.3 billion EUR, an adjusted EBIT of 1.2 billion EUR and an adjusted EBIT-margin of 8 %. In a combined setup, Siemens and Alstom expect to generate annual synergies of 470 million EUR at the latest in the fourth year following completion of the merger, and the net cash target for when the merger is completed is between 0.5 and 1.0 billion EUR. The rolling stock management team and global headquarters will be located in the Paris district and Siemens Alstom will remain registered in France. The headquarters for the Mobility Solutions business will be located in Berlin. In total, the new entity will have 62,300 employees in over 60 countries.

The businesses of the two companies are largely complementary. The combined entity will offer a significantly increased range of diversified products and solutions. Clients will significantly benefit from a well-balanced larger geographical footprint, a comprehensive range of products and significant investment in digital services. The combination of both companies’ know-how and innovation power will encourage crucial innovations, cost efficiency and faster responses. This will enable them to better address clients’ needs.

The Board of Directors of the combined group will consist of 11 members, of whom six will be Siemens-designated directors, one of whom will be the Chairman. The other five persons will be four independent directors and the fifth will be the CEO. In order to ensure management continuity, Henri Poupart-Lafarge will continue to lead the company as CEO and will be a board member. Jochen Eickholt, the Siemens Mobility CEO, is to assume an important responsibility in the merged concern.

The transaction is nevertheless subject to clearance from the pertinent regulatory authorities, including foreign investment clearance in France and anti-trust authorities, as well as the confirmation by the French capital market authority (AMF) that no mandatory takeover offer is to be launched by Siemens following completion of the contribution. Completion of the merger is expected to take place at the end of 2018.

Earlier in 2017 it was revealed that negotiations had initially took place between Bombardier and Siemens with a view to a merger of their rail transport interests. However, on 16 June the talks broke down, since the companies were unable to agree on a price and management structure. Instead, this new Franco-German merger emerged.

We posed three significant questions to both Siemens and Alstom:

We only received one reply, from Alstom, which stated that „It is too early to talk about products and their sale strategies“. Siemens did not answer us at all, despite our sending them two reminders (perhaps this is not included in the „faster responses“ outlined in the press release...).

It has to be admitted that the lack of definitive answers is surprising. Surely these issues would have been at the head of the discussion agenda for both companies as they planned their merger. It is clear, blatantly so, that both manufacturers are trying to square up to CRRC. But as the accompanying graph shows, their annual revenue for 2016 (in billion EUR) is still only around a half of that of CRRC. It is also clear that Siemens Alstom will have greater clout in steering European legislation, and railway legislation in general, than would Siemens and Alstom as separate entities. Savings will surely be made through synergies.

But will this be sufficient to stop CRRC in its tracks? Because the size of the company itself is not the main decisive factor for train operators.CRRC succeeds by offering business deals which are up to 50 % cheaper than those offered by practically all other rail vehicle manufacturers worldwide. This is astonishing, given that the cost of labour in large cities in China is rising, being now on a par with that in some „cheaper“ European countries, such as the Czech Republic. However many of the CRRC subsidiaries are not situated in China’s largest cities, where wages are highest, on average.

There are in fact huge wage variations geographically across China. This means that in the provincial cities wages have not risen so rapidly as in the largest ones. Nevertheless, it has become evident that CRRC products have over recent years become increasingly expensive.

In answer to our questions CRRC indicated that it is able to make „significant savings through its purchases of raw materials and energy for production. This is because the scale of production in China is so huge that scale economies reduce fixed costs far more than they are able to do in the case of European train manufacturers.
Moreover, almost all CRRC factories are adopting ,lean manufacturing’ strategies to streamline their production. CRRC is also able to self-support its activities, and it not only builds the vehicles, but also produces their components and spare parts. This simplifies logistics and ensures that products are cheaper.“

And last, but not least, we must take into account the Chinese government’s support of export strategies. In Railvolution 2/17, p. 69 we offered the example of how WBN Waggonbau Niesky buys components in China. The Chinese Government provides the manufacturer of these components (such as welding machines and machine tools) with subsidies, which results in their being offered at a very competitive price in the European market.

All the above-mentioned points enables CRRC to increase its global influence. It will be difficult for rail vehicle manufacturers to resist for long CRRC’s lower prices. It will only be a question of time now before CRRC finds a loophole to penetrate the European rail vehicle market in a significant manner, in spite of the defences that will inevitably be raised against this happening.

We should also bear in mind that, by way of generous - perhaps over-generous - technology transfers, the same companies which are now trying to build their defences against CRRC actually supplied the predecessors of the latter with the modern technology which they are now endeavouring to offer the European market (see Railvolution 3/16, pp. 62 - 63). We shall gave to wait and see what practical results come out of Alstom’s and Siemens’s merger to create a „new European champion“, and whether one outcome will be a significant lowering of rail vehicle prices. 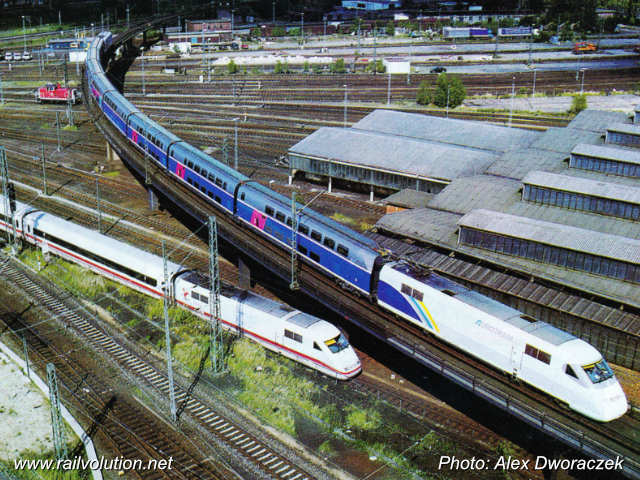 This is not first time that Alstom and Siemens have joined forces. In March 1996 Eurotrain was a joint venture formed by Siemens VT (40 %) and GEC Alsthom (60 %) to market high speed rail technology in Asia. In 1997, Eurotrain was one of two competitors who were to supply the core system of Taiwan High Speed Rail (THSR), and it was awarded the status of preferred bidder by the THSRC consortium, which later chose a rival consortium, resulting in a legal battle which ended in Eurotrain being awarded damage payments in 2004.
To meet THSRC’s high capacity requirements, Alstom and Siemens planned to create a train that combined TGV Duplex articulated double deck intermediate cars with two ICE 2 power cars. The number of intermediate cars would be increased from the eight of the TGV Duplex to 12. Since March 1998 the two companies created a demonstration train using DB’s ICE 2 power cars 402 042 and 046 and eight intermediate cars from SNCF’s TGV Duplex 224. The cars involved had to be slightly modified to enable a connection of the two very different types of high speed stock.
The Eurotrain demonstration rake was assembled in the München ICE depot and since 9 April 1998 was subjected to running tests. On 27 April 1998, following an EBA approval, high speed test runs began, on which the speed was raised from 250 km/h up to 310 km/h. The objectives behind these tests were to evaluate ride comfort, stability, pressure waves and noise levels. On 3 May 1998 the Eurotrain demonstration rake was presented to the public in Hamburg. This photo shows it meeting an ICE1 near Hamburg-Altona. The following day Eurotrain made a presentation run from Göttingen to Hannover with representatives from THSRC on board, when a top speed of 316 km/h was reached.
Jaromír Pernička
Published in Railvolution 5/2017