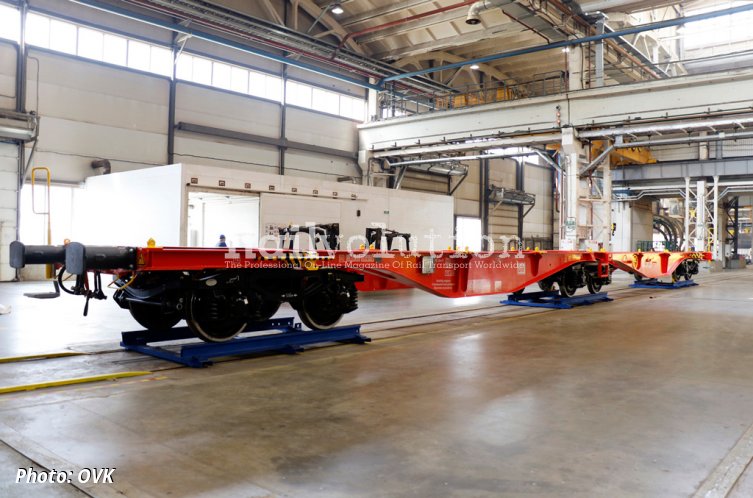 On 26 February 2020 OVK (UWC) announced that the prototype Class Sggrs 80-foot platform wagon, which forms part of a batch of 270 ordered by DB, has successfully passed homologation and certification testing in Europe. The test results enable OVK to start the official certification procedure at ERA (the European Union Agency for Railways).

On 27 November 2018 an announcement was made that DB had ordered 160 six-axle Class Sggrs 80-foot platform wagons from OVK, to be delivered during the first half of 2020. Then in late August 2019, during Pro//Motion.Expo, a contract for 110 more was signed, deliveries to be completed by November 2020.

The first wagon, one of the prototypes, was completed in July 2019. In August, the prototypes were sent to the VÚKV testing facility in the Czech Republic for a series of tests for compliance with TSI WAG and TSI Noise requirements. They were subjected to static and dynamic testing until early 2020. Tests also evaluated the performance of the underframes when subjected to longitudinal and vertical stresses. The wagons were also subjected to shock absorption tests when empty and loaded, their brake systems were tested, and the vehicles’ performance when negotiating a series of reverse curves was assessed.

In October 2019, one prototype was tested also at the Polish Źmigród test circuit. The TVSZ plant in turn also underwent a successful audit of its manufacturing and quality processes by VUZ, a Czech NoBo accredited ERA. The result is that TVSZ were awarded the TSI compliant certificates for production of the Class Sggrs 80-foot platform wagons.

The wagons will be 26,700 mm long over buffers. Top service speed will be 100 km/h when loaded and 120 km/h when empty. Other design specifications will be similar to, and compatible with those of other types of standard 80-foot platform wagon produced in Europe. This type of wagon has a tare weight of around 27 t and can carry payloads of up to around 108 t, having thus similar technical characteristics to other wagons of this type being currently built in Europe. Bogies with a 22.5 t axle load are supplied by the Turkish manufacturer Railtur vagon endüstrisi.

OVK (Obedinyonnaya vagonnaya kompaniya - United Wagon Company, UWC) is gradually penetrating the European wagon market. Following the contract announced on 7 August 2018 by Laude Smart Intermodal of Poland for 200 1,520 mm-gauge 40-foot platform wagons, a further breakthrough came the following day, when OVK announced that it had passed a quality audit conducted by DB to act as a wagon supplier for the latter, the company being assigned Q2 quality status. DB sets extremely high standards for the quality of processes and implementation, therefore this quality status assignation means a highly respectable reference for the future.

Next came InnoTrans 2018, at which OVK exhibited an 80-foot 1,435 mm-gauge platform wagon suitable for container traffic. On 18 September DB Cargo and OVK signed a Letter of Intent regarding a future contract for similar wagons. The culmination of this came on 27 November 2018 when an announcement was made that a contract had been confirmed for 130 Class Sggrs platform wagons, to be delivered during the first half of 2020. There was an option for further batch of unspecified size.

This major breakthrough for OVK did not come about overnight. Over the course of 2018, OVK carried out R&D work, worked on the design with its German colleagues, studied existing European standards, prepared its manufacturing facilities and personnel, and established links with international suppliers. The platform wagon was designed by OVK’s R&D Technology and Transportation Centre (VNITsTT) and the batch is to be built by one of OVK’s enterprises at Tikhvin, not far from St. Peterburg. It was planned to get the wagons fully certified in compliance with  TSI requirements by the end of 2019.

OVK envisages that this contract will only be the beginning of its penetration of the European wagon market. Not only will new clients be attracted, but also other wagon types are to be offered. OVK’s factories have a combined annual output capacity of up to 22,000 wagons, and are in this respect capable of a much greater output than are the largest factories in Europe building 1,435 mm gauge wagons. These factories have on average an annual output capacity of around 3,000 wagons, in some cases able to increase this to a maximum of around 4,000.