Vega Expands Its "Trailer Use" System In Cooperation With VTG 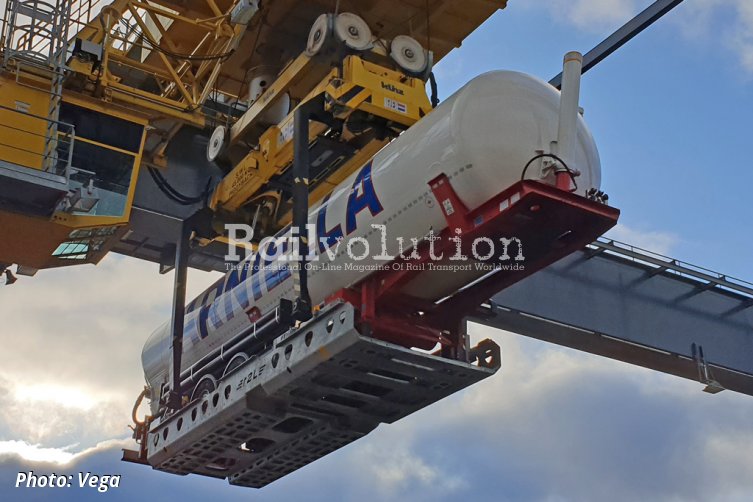 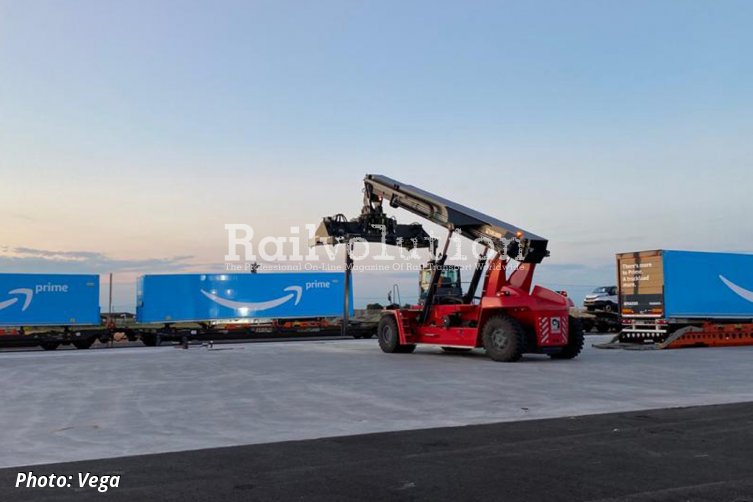 Since 2016 Siezenheim-based Vega International Car Transport & Logistic - Trading develops transports of road vehicles using its roadrailLink (r2L) system, which features loading structure, which can be positioned in an ordinary pocket wagon. In its initial version 1 and version 2.0 „Multi Use“ designs, the company targeted the markets less common for rail, like new-built truck tractors and buses; the other vehicles, such as new-built semi-trailers, were transported just as an additional load, to utilise capacities of the existing services.

This however prompted the company to develop another kind of loading structures - r2L version 2.1 „Trailer Use“ - tailored to transport of semi-trailers, keeping still the basic characteristics: the structure itself is being manipulated by ordinary intermodal reloading technics, therefore non-craneable semi-trailers can be transported using this way. This brings another variant of such system with ordinary pocket wagons and manipulation technics being sufficient, similar to the principle of the Nikrasa system, in contrary to complex technologies for transport of non-craneable semi-trailers, such as Lohr and Cargobeamer.

However, Nikrasa needs an additional ramp to be located on the ground, while the r2L „Trailer Use“ technology involves just the loading module alone, the handling in the terminals being therefore easier - it can simply be done in front of concerning wagon, within 2 - 3 minutes. Cargobeamer offers possibility of vertical loading of semi-trailers also using this „basket“ principle, but requiring special tailor-made wagon design, as horizontal reloading is the basic idea of this system and vertical reloading is just additional possibility.

With around 3.9 t tare, the r2L „Trailer Use“ module is heavier than Nikrasa, whose 2.0 version module weighs 2.2 t, which is a logical consequence of the latter system being split to on-ground loading ramp and loading module. However, with semi-trailers’ maximal allowed weight on account of road limits, this does not pose any problem with maximal wagons’ payload. The r2L „Trailer Use“ module can accommodate any typical semi-trailers, including mega (3 m inner height). The height of loading deck above rail top remains almost unchanged from that of wagon itself therefore calculations for loading gauge and intermodal codification remain almost the same.

Vega herewith entered the segment of moving of semi-trailers in its everyday transport business, while modules of its previous versions are used merely for expedition of new-built vehicles.

Initially, the modules were compatible just with Type T3000 pocket wagons. For use in the TWIN wagons, the module needs slight adaptations and such version of „Trailer Use“ module is under testing right now.

Meanwhile in June 2020 first test loadings and transports took place to materialise plans developed in close cooperation with VTG. Consequently regular services were launched in autumn 2020, and today they are used on various lines such as Rotterdam - Berlin and Tilburg - Rzepin. VTG is both renting out wagons with adapters further to another operators and using in own services provided by its own operator Retrack.

Further plans of VTG are to offer this system on a service connecting Dresden and Poland, as well as for domestic services within Poland. Furthermore VTG plans to join Vega on the lines from Germany to Suzzara and Fernetti and CFL multimodal on Bettembourg - Trieste and Bettembourg - Kiel services.

Vega has closed a framework agreement with VTG, for fitting the latter’s T3000 and TWIN pocket wagons with „Trailer Use“ modules. So far 150 modules were ordered and the extent of future firm contracts will depend on market response and needs. Until now VTG uses over 50 Type r2L 2.1 „Trailer Use“ modules and all 150 units are scheduled for delivery by the end of 1st quarter of 2021. All these are already contracted to particular final customers.

The r2L modules of previous versions are still regularly used for twice weekly Wörth - Fernetti (Trieste) and Rheine -  Suzzara services, which are block trains using exclusively just this technology and carrying new-built commercial vehicles like trucks and vans and new-built semi-trailers. In January 2021, a new Swarzędz - Suzzara service was launched, transporting production of the VW factory near Poznań and also Italian production northbound. Running now weekly, development to 2 - 4 pairs a week is foreseen.

Vega plans now to increase frequency of the Rheine - Suzzara service to three pairs a week, and builds up a new line between Rheine and Fernetti, one or two pairs weekly. Very likely Kombiverkehr will furthermore incorporate the technology in its service connecting Trieste and DUSS Terminal in Köln-Eifeltor.

Vega therefore brings to the market a new solution for transport of non-craneable semi-trailers, which still form some 95 % of the semi-trailers running on European roads. With one module being able to save up to 200 t of CO2 annually, this means potential for attracting more customers.