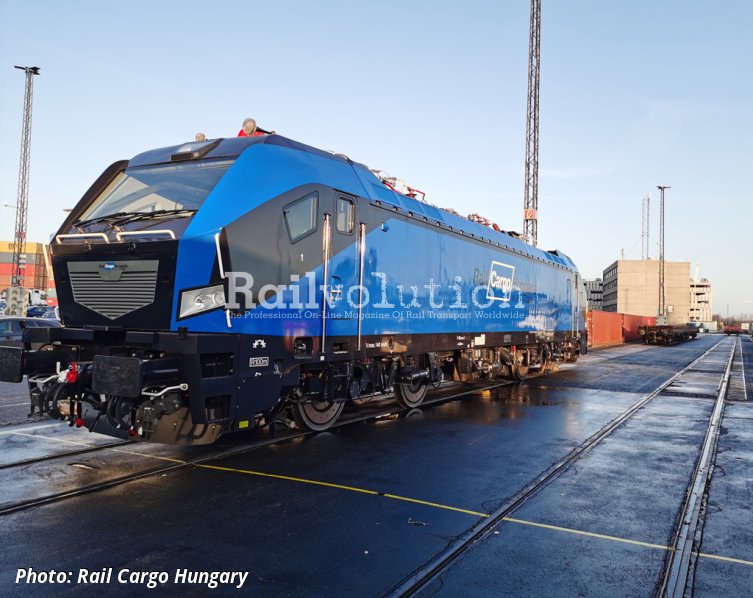 Rail Cargo Hungaria announced now delivery of the CRRC-built electro-battery mainline locomotive to Europe. Actually, it was disembarked in the port of Bremen in late autumn already.

In the upcoming months, experts will check whether the vehicle meets the requirements of the customer, as well as carry out the examinations and running tests required for the authorisation. Static and dynamic tests will take place in the technical laboratory of DB Systemtechnik in Minden, running and braking tests will be carried out on the test track. After all these tests, expected to be finished by the end of May, the stress tests will be performed on a public network.

According to plans, the running tests will take altogether approximately 1,750 operating hours. The complexity of the work required to obtain the type approval is increased by the fact that currently there is no technical experience available in the EU in respect to Chinese locomotives; there are no precedents for the interpretation of the requirements of the recently introduced 4th railway package, either.

The locomotive has a power of 5,600 kW, a top speed of 140 km/h, length over buffers 19.47 m and distance between bogie centres 9.5 m. The supercapacitors, acting as a kind of last mile module, will have a capacity of 200 kWh. The locomotive is to be able to run at least 10 km on a horizontal track on its own, without supply from an overhead wire.

According to the contract signed in October 2019 between Rail Cargo Hungaria and CRRC ZELC, the Chinese company develops electro-battery shunters and high-power mainline locomotives optimised for freight transport within 36 months, produces two vehicles of each type and delivers them with the relevant Hungarian and international licences to RCH.

In accordance with the agreement, RCH is going to lease the vehicles for a period of four years. If the hybrid locomotives meet the expected performance, RCH can exercise an additional lease or even a purchase option, and can order additional 20 vehicles of both types each under favourable terms and conditions.

RCH is going to use the shunters in Hungary and plans to use the mainline locomotives in addition to Hungary in Croatia, Serbia, Romania, Macedonia, Greece and Bulgaria.