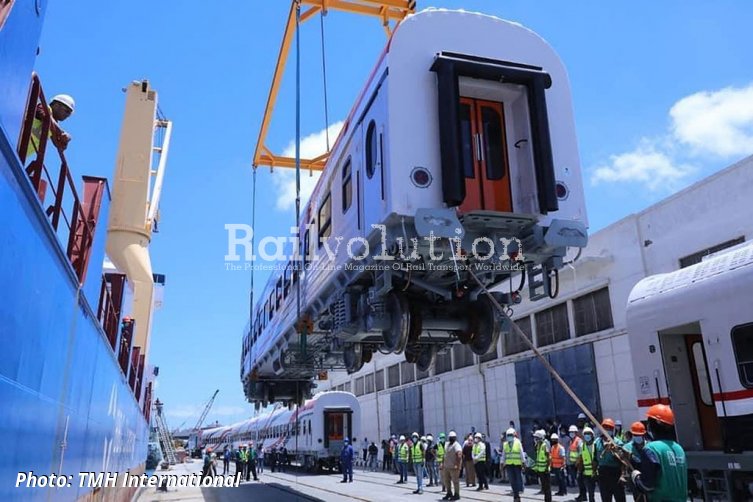 On 25 June 2020 TMH officially delivered to ENR in the port of Alexandria the first 22 batch-built carriages, in presence of representatives of the Egyptian Ministry of Transport. Ten more coaches left Russia on 19 June. They are due to arrive in Egypt in the first decade of July. With one prototype delivered in April 2020 for testing, this first batch includes 33 third-class vehicles equipped with dynamic ventilation.

The cars were transported by trucks from TVZ, where they are produced, to the port of St. Peterburg and loaded onto a vessel heading for the port of Alexandria. A team of technical experts from TVZ arrived last week in Egypt to perform the official hand-over procedure, which includes a brake check on each coach. The coaches will now be sent to Cairo to start commercial operation on 1 July.

“We are extremely pleased to have been able, despite the challenging context of the Covid-19 pandemic, to deliver on-time the first coaches to ENR and to successfully complete the certification test campaign in Hungary and Egypt. This is the result of the joint efforts of a multi-country team in Egypt, Russia, and Hungary, working in close cooperation with the customer”, said David John, Chief Technical Officer and ENR Project Director at TMH International.

In April, TMH managed to load the first car for ENR on the last vessel leaving Slovenia before the lock-down period, allowing ENR to start two-month running tests on its network. Unable to travel abroad, TMH specialists in Russia have developed a full training kit and documentation pack for ENR and relied locally on TÜV Nord Egypt technical expertise to supervise the testing together with TMH Egypt local team. In Hungary, BME certification body is expected to deliver certificates of conformity for the coaches by end of the month.

The 1,300 passenger cars ordered by ENR will not only add a further 30 % capacity to the current fleet, but significantly increase its reliability and safety. The country has launched an ambitious modernisation programme of its railway network, resulting in the largest ever rolling stock order won by TMH Hungary in 2018. The contract includes a three-year warranty period. In addition to the warranty, TMH Egypt would be ready to maintain the fleet.