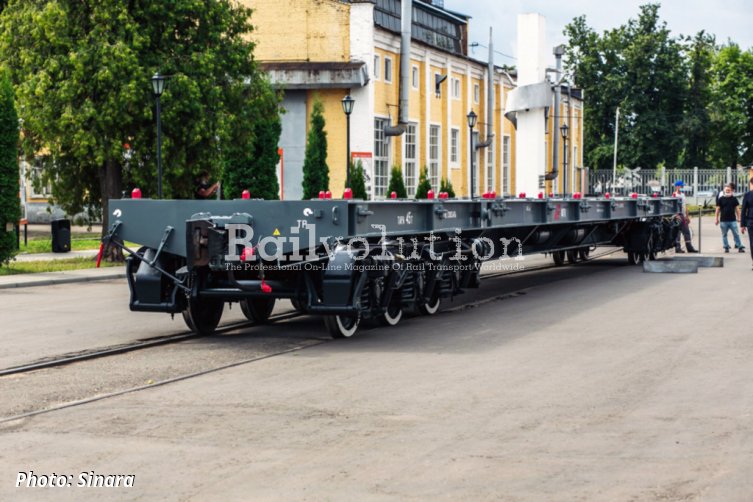 On 22 July 2021, STM (Sinara Transportnye Mashiny) presented at its Kaluga-based Remputmash (RPM) factory a prototype of the new Model 13-6704 container wagon. It is an 80-foot six-axle wagon with a maximum speed of 140 km/h, built according to the specification set by FGK (Federalnaya gruzovaya kompania, Federal freight company, a RZD subsidiary).

The project is being developed jointly by RPM and VNIKTI (All-Russian scientific research design and technology institute of rolling stock) of Kolomna. The project to create a container wagon for a top speed of 140 km/h is being implemented in accordance with the FGK’s Innovative development program until 2025 (the FGK fleet includes 134,200 wagons).

It is planned that such wagons will be used for the transportation of goods in the direction of the Far East - European Russia, and for delivery of delicate goods with high added value from China to Europe at speeds equal to the speeds of passenger trains. The implementation of this service will allow RZD (FGK) to offer a new high-margin product to markets.

Viktor Voronovich, the FGK CEO, has expressed that the company’s plans is to purchase 720 of the Model 13-6704 platform wagons between 2022 and 2024. The new wagons will allow FGK to transport containers from China to Europe in seven days. They incorporate innovative three-axle bogies and a number of other unique structural advantages allowing a larger carrying capacity with only a 20 t axle-load. It means that these wagons may be used to carry two 40-foot containers.

The batch production will be carried out at Remputmash Kaluga. The latter will place an order for bogie production to LTZ (Lyudinovo diesel locomotive works) and another orders for the production of main frames and welding of main components to Kalugaputmash, both companies part of STM. Subsequently, RPM will take a final assembly and testing.

In July and August, the prototype will undergo test runs at the VNIIZhT Shcherbinka test centre, at speeds of up to 120 km/h. After that, it will be moved to Belorechenskaya - Maykop test line, where it will be tested, loaded with containers, at speeds of up to 140 km/h. Completion of preliminary acceptance and certification tests, as well as obtaining a certificate, are planned for the fourth quarter of 2021. Batch production is expected to start in late this year. Meantime, the prototype will be exhibited at PRO//Dvizhenie.EXPO at Shcherbinka in August 2021.