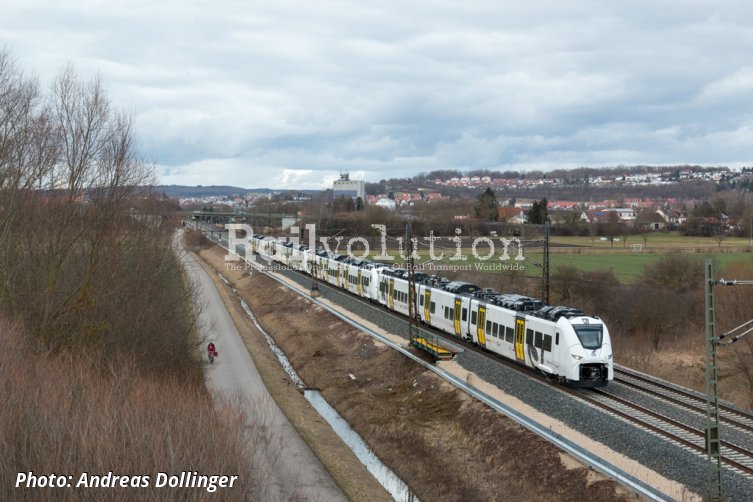 At present various Mireo EMUs are subjected to testing, four of these on the Donauwörth - Augsburg line. They form part of an DB Regio order placed with Siemens on 8 August 2017 for 57 three-car Mireo EMUs for S-Bahn Rhein-Neckar and middle-distance services.

The Mireo design was introduced in summer 2016, and this was the second order, the first being for 24 EMUs for DB Regio’s Rheintal-Netz group of services in southwestern Germany.

S-Bahn Rhein-Neckar’s new Mireos operate on 15 kV 16.7 Hz, have a Bo’ 2’ 2’ Bo’ axle arrangement, are 69,860 mm long over couplings, and have a continuous power rating of 2,600 kW. Their entrance threshold height is 800 mm above rail top, enabling level access at all 760 mm high platforms, and there are six pairs of entrance doors.

These trains will be put in service in two phases, first in Baden-Württemberg and Südhessen in December 2020, then in Rheinland-Pfalz on services between Mannheim and Mainz in December 2021. Construction is taking place at Siemens’s Krefeld factory. On 2 February 2020 four Mireo and one Desiro HC EMUs were moved by RailAdventure to Donauwörth, to be tested in and around the latter station.

Until now five S-Bahn Rhein-Neckar’s Mireos were built, the fifth EMU leaving Krefeld towards PCW on 11 March 2020. Currently there are no other Mireos on test on the public network.