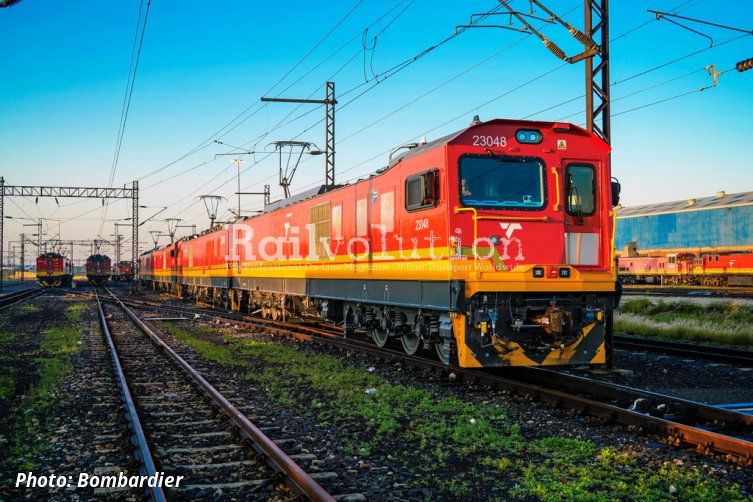 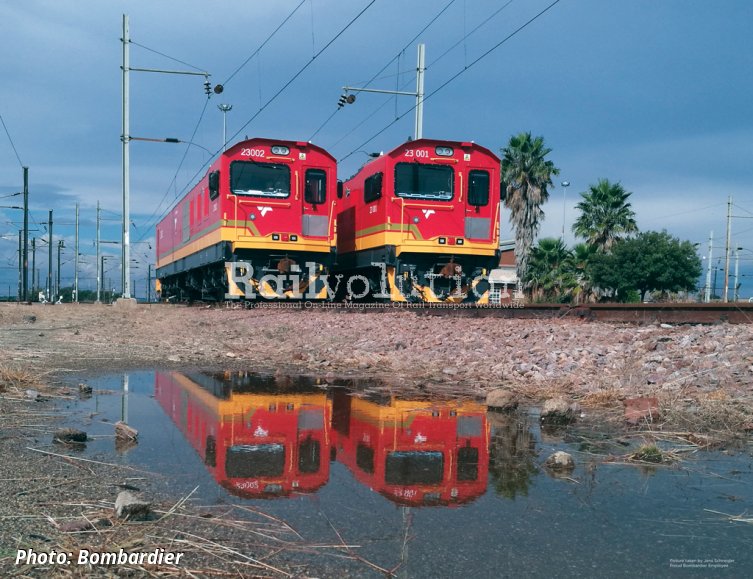 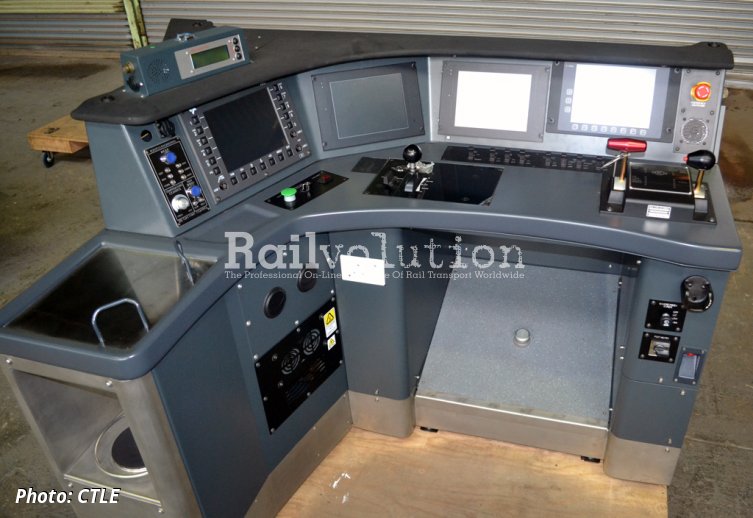 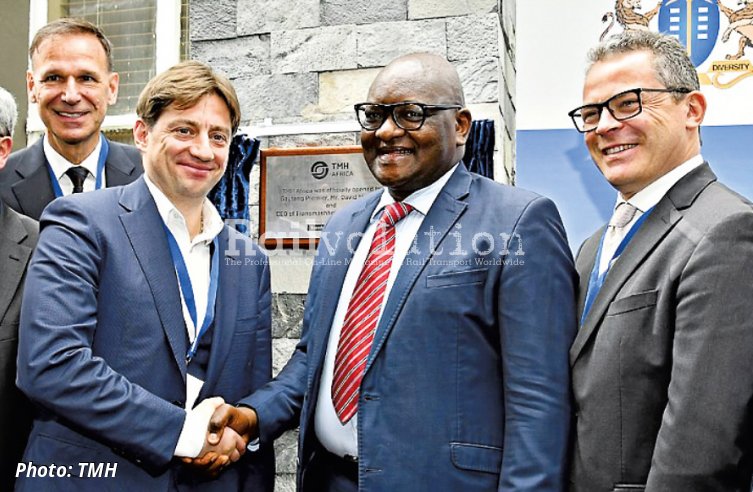 Bombardier Transportation announced that its Transnet locomotive fleet in South Africa has successfully completed ten million km in service since operations began in December 2017. Transnet Freight Rail (TFR) awarded Bombardier the contract to supply 240 electric locomotives in March 2014. Since then, Bombardier has been delivering the TRAXX Africa locomotives to Transnet as part of South Africa’s rail modernization plan. In addition, the localised manufacturing is contributing towards skills development in the country and Broad-Based Black Economic Empowerment (B-BBEE) programs.

The locomotives are being used to transport freight on South Africa’s long routes between its mines and ports. With over ten million tons of freight movement making 1,600 trips of 2,200 km from Hotazel to Port Elizabeth operating in multiple during each trip, Bombardier is significantly maintaining high fleet availability and reliability for Transnet’s operations. The TRAXX Africa locomotives have been operating at an availability rate of 98 % compared to 95 % contractual requirement and one failure per million km compared to the target of 15 based on the contract requirements.

Bombardier is a B-BBEE level 2 certified company, also exceeding the requirement to maintain B-BBEE level 4 under the contract contributing significantly towards local development programmes for the South African government. Bombardier has maximised local manufacturing and has assembled the new freight locomotives from the very first unit in South Africa, with more than 60 % of the total contract value on local content achieved.

We asked Bombardier, how many of the 240 TRAXX locomotives on order were delivered until now. The company answered us: "At this stage, we can mention that the delivery of locomotives is planned as per the schedule agreed with the customer. There is no further comment from our side on this topic." It is to remember that according to the initial 2014 contract the deliveries were scheduled to run from April 2016 until the end of 2017. Later the delivery dates were changed to run from the second half of 2016 until mid-2018. However, on 9 December 2020 Transnet stated that only 56 TRAXX Africa locomotives were delivered and accepted for regular service until now (see far below).

The Co’Co’ TRAXX Africa locomotives are designated Class 23E, are designed for a top service speed of 100 km/h, and are rated at 3,800 kW. They have nose-suspended traction motors, and have a maximum starting tractive effort of 480 kN, a maximum electrodynamic brake force of 375 kN and an EDB power of 3,800 kW. Each locomotive is fitted with a MITRAC TC 3360 MS power converter. Compressed air is supplied from an 800-litre air tank, the compressor having a capacity of 2,750 litres per minute.

Their bodyshells are designed to withstand a maximum end-on compressive force of 4,450 kN, and crashworthiness protection features include vertical corner pillars at the front of the cab and anti-climbing devices at the front and rear ends of the underframe, these extended horizontally above the couplings. This feature was requested by TFR, reflecting certain special operational requirements in South Africa. No ATP system is fitted, GSM-R train radio is installed, and the train communication system consists of a WTB with an AAR 27-pin train line. The locomotives are prepared for the installation of RDP operation (Radio Distributed Power).

The first TRAXX Africa bodyshell left the DCD Rolling Stock works in Boksburg near Johannesburg (see below) on 5 November 2015. This company acts as a component sub-supplier for Bombardier in this project. The bodyshells are then moved to Durban for final assembly by sub-supplier Transnet Engineering (TE), where work started in early November 2015.

Not only are the bodyshells built and final assembly is realised in South Africa, but also the propulsion and control equipment is produced there. For example the electrical cabinets and converters are being manufactured at Bombardier’s factory in Johannesburg, the bogies by TE of Durban and the driving consoles are produced by CTLE of Nigel, east of Johannesburg. CTLE stands for Commuter Transport & Locomotives Engineering, where Alstom has had a 51 % share since November 2015.

The result is that over 60 % of the contract for the 240 locomotives is being realised in South Africa, with corresponding investment in local manufacturing capacity, training, and skill development of the local workforce. Bombardier Transportation South Africa is owned by Bombardier Transportation GmbH, which has a stake of 74 % in the company, the remaining 26 % of the shares being owned by South African employees and business trusts. By late 2016 around 200 people were working on the TRAXX Africa project.

Following TMH’s venture into Argentina, with the rehabilitation of Mechita depot and works, on 2 April 2019, working under its TMH Africa brand name, the manufacturer inaugurated a revived rolling stock factory in Boksburg, Ekurhuleni municipality, in Gauteng province, not far from Johannesburg. With rail transport evolving and modernising rapidly in Africa, TMH envisages substantial future orders, worth billions of euros, in the future. TMH Africa is owned jointly by its subsidiary TMH International (70 %) and South African investment company MJISA (30 %).

The TMH Africa factory in Boksburg, the company’s first in the continent, covers an area of 45,000 m2. It was acquired in November 2018 from DCD Rolling Stock, which closed down as a result of financial problems, involving a debt of around 12 million SAR (0,74 million EUR) in late 2018, after having existed since 1911. It thus had a workforce, also taken over by TMH, of 130 employees with generations of accumulated engineering skills.

TMH Africa plans to invest around 500 million SAR (32 million EUR) in the project to revive Boksburg, the project involving not only the modernisation of the facilities but also the training of the workforce in new manufacturing skills. The factory specialises in the maintenance, manufacture, assembly and refurbishment of locomotives and rolling stock. DCD Rolling Stock’s activities included the TRAXX Africa locomotives and modernisation and overhaul projects for PRASA rolling stock.

Boksburg factory is set to expand, having the potential to increase its workforce to around 500 once contracts are secured and full production has been achieved, according to Gauteng Premier Manemolla David Makhura during his speech at the media event. He reckoned that Boksburg’s revival had come at an opportune moment, given the strategy now being pursued by PRASA (Passenger Rail Agency of South Africa) to modernise its fleet of trains and upgrading its signalling.

At inauguration day on 2 April 2019 Makhura observed that „The Gauteng Provincial Government remains committed to economic transformation. I am glad that TMH Africa has made the right decision and chosen to invest in this sector that can only grow in Africa. A lot of factories closed down in Gauteng after the 1990s on account of changes in the global manufacturing industry.“

According to Sam Bhembe, the director of MJISA Investments, speaking on the 2 April inauguration day: „The biggest constraint for South Africa was that we only had two major clients for locomotives, and they were Transnet and PRASA. But Boksburg factory is destined to export locomotives to other countries, so now inevitably you have to have a competitive edge for the markets that you are supplying outside South Africa.“

TMH International envisages Boksburg as its gateway entrance factory in the continent for rolling stock assembly, maintenance and refurbishment. TMHI is looking to spread its influence on a more worldwide basis, with a planned investment of around 300 million USD in chosen countries. So far 500 million SAR have been earmarked for investment in the African continent, in particular in Egypt and South Africa. Over the coming five-year period around 800 million USD are to be invested in expansion projects in Argentina, Egypt, Cuba and Kazakhstan.

The Contract For 1,064 Locomotives

The announcement by Transnet, South Africa’s state-owned freight transport and logistics company, on 17 March 2014 concerned the largest contract for locomotives ever awarded in the history of South Africa. In addition to Bombardier’s TRAXX order, CSR Zhuzhou Electric Locomotive works (now part of CRRC) received a contract for 359 electric locomotives worth more than 2 billion USD, this being the China’s largest vehicle export order. These 3 kV DC/25 kV AC locomotives have a Co’Co’ axle arrangement, are rated at 4,650 kW and have a maximum speed of 100 km/h. Their technology is based on that incorporated in the family of Class HXD1 locomotives in China, but their design is in part similar to TFR’s four-axle Class 20E locomotives, of which 95 were ordered in 2012.

GE South Africa Technologies and CNR Rolling Stock South Africa (Pty) received a contract to build 465 diesel locomotives. Of those 233 are GE’s Evolution Type ES40ACi, and the remaining 232 are of CNR’s origin. South African manufacturers are to supply 55 % of the components for these diesels. TFR’s Type ES40ACi locomotives are single-cab, six-axle 100 km/h AC machines, powered by a 12-cylinder 3,108 kW GEVO engine.

The contracts, for a total of 1,064 locomotives, are worth in all 50 billion Rand (3.34 billion EUR at that time). One of the key factors in awarding the contracts was the manufacturers’ willingness to comply with the tight schedules. The reason for using four companies was that Transnet reckoned that a sole producer would not have the capacity or resources to be able to handle such a large contract on its own within the time limit stipulated: initially all locomotives were to be delivered within 3.5 to 5 years. That means, when production reaches its expected peak, around 480 locomotives per annum were (theoretically) to be outshopped - an average of around 40 per month!

However, until now (9 December 2020), only 56 TRAXX Africa locomotives were delivered and accepted by Transnet, and of the Chinese origin only 260 of 359 CSR-built and only 22 of 232 CNR-built locomotives were delivered. Exception is a batch of GE-built diesel locomotives, of whose all 233 are in service. Such huge delays are caused by the fact that in 2019, Transnet declared the programme for 1,064 locomotives as “irregular and illegal” and initiated a legal review of the contracts.