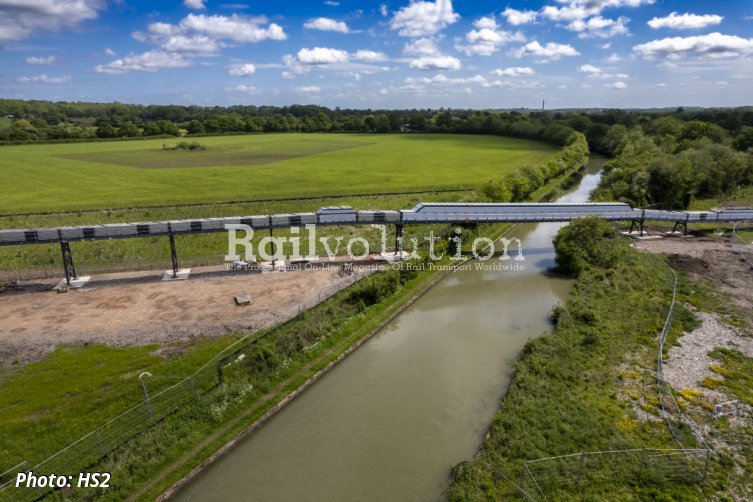 A new conveyor has started operating on HS2’s Long Itchington Wood Tunnel site in Warwickshire to take over 750,000 tonnes of excavated material over the Grand Union Canal where it will be reused in other locations of the route. HS2’s civils contractor for the Midlands, Balfour Beatty Vinci (BBV) has built the 254 m long machine to move material currently being excavated from Long Itchington Wood Tunnel and a railway cutting in the same location.

It is expected that the new shortcut will remove the equivalent of around 30,000 HGVs from local roads, reducing impacts on the local community and cutting carbon. The conveyor will operate until early 2023, before it is dismantled and rebuilt at Water Orton as part of a 1,200 m long conveyor which will remove hundreds more lorries from the roads every day.

Excavation of the twin bore tunnel will produce around 500,000 tonnes of mudstone and soil, which is processed at an on-site slurry treatment plant and separated out before being transported by the conveyer to be used to build embankments along the route of HS2. An additional 250,000 tonnes of material will come from excavations for a railway cutting, which will also be transported by the conveyor.

In December 2021, HS2 CEO Mark Thurston launched the Tunnel Boring Machine ‘Dorothy’ - named after the first British woman to win the Nobel Prize in Chemistry - on her one mile journey underneath the Warwickshire countryside. The tunnel will preserve the Long Itchington Wood above the site, which is classified as a Site of Special Scientific Interest (SSSI). Dorothy is expected to complete her first bore later in the summer, and this will be the first tunnel breakthrough on the HS2 project.