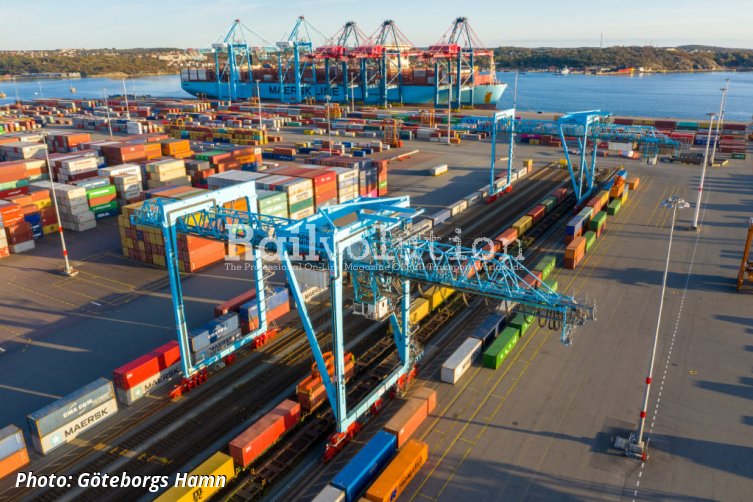 Another freight train shuttle service is now starting between the North of Sweden and the Göteborg Port. It is the latest in a series of rail shuttles connecting the growing industry in the north with markets on other continents via the Göteborg Port's shipping line network. The first train from Umeå arrived in Göteborg on 29 May.

The North of Sweden ("Norrland") is the backbone of Swedish export industry and energy supply, and it is set to grow fast. Over the next 20 years, more than 1,000 billion SEK will be invested in new industries. Northvolt's battery factory in Skellefteå and the production of fossil-free steel in Boden are known to most Swedes, but these investments are just the tip of the iceberg in the industrial boom that is underway in the north.

"If all planned industrial investments in Norrland become a reality, it will be a historic series of investments in new technology and new industries that will largely contribute to green transformation. This will mean an increased need for transport" says Anders Hjalmarsson, CEO of the Västerbotten Chamber of Commerce. "It is unequivocally so. Much of what is to be produced is going south, at the same time as we will have a great need for input units for industry production in a northerly direction. But the need for sustainable transport applies to both shipping and rail, and therefore it is also good that both the Port of Umeå and the Port of Skellefteå have begun investments that further strengthen capacity in our region.

In the existing industry in Norrland, the need for transport is already great today, and the export markets are often found on other continents. Therefore, regular and reliable connections to the Göteborg Port's direct line network are important to get the products out to customers quickly. In the Göteborg Port, railway volumes are at an all-time high and according to the Port Authority Vice President of Sales & Marketing Claes Sundmark, the Norrland traffic is partly responsible for the upturn:

"There are several explanations for that. Increased focus on climate-smart transport is an important part, as well as customers realising that the railway is reliable and efficient over time. And the longer the transport distance, the more the railway comes into its own. From the port's perspective, we can state that increased Norrland traffic also strengthens the port as a guarantor of business's access to the world."

The latest example of the growing Norrland traffic is a new container train shuttle between the northern city of Umeå and the port of Göteborg. The shuttle, which will initially depart one day a week in each direction, is operated by the forwarding company First Row Shipping & Logistics. The train, which has the capacity to transport 68 containers, leaves Göteborg on Friday morning. On Saturday morning, it arrives at the newly opened freight train terminal in Umeå, where it is loaded with southbound freight before departure to Göteborg again the same evening. The train then arrives directly in APM Terminal's container terminal in Göteborg on Sunday, where connecting ships wait with direct departures to Asia and the USA, among other places.

According to Anders Hjalmarsson, many players in the transport sector are positioning themselves in Norrland in the face of the growing transport needs that are expected. An example of this is First Row Shipping & Logistics, which has already come a long way in the development of its operations in Norrland: "The future looks very bright and we are happy to have been able to get started this early in the process. Our Piteå shuttle has gone incredibly well and has continued to grow from one to three departures a week since the start last year. We see the same development ahead of us in terms of the Umeå shuttle, where we expect to increase the frequency already after the summer. We are building the base here and now so that it is available in the future, we are in Norrland to stay."