A Desiro HC EMU On Test 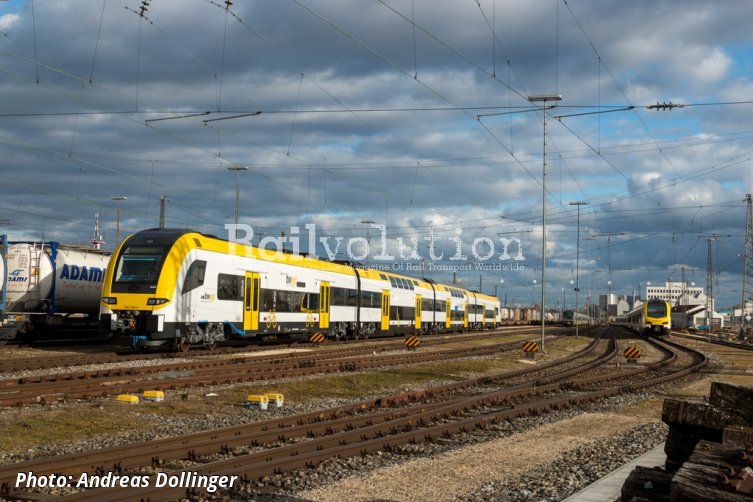 On 2 February 2020, Desiro HC 1462 006 (and four Mireo EMUs) were moved by RailAdventure to Donauwörth, to be tested in and around the latter station. In late February both types of EMUs also ran in multiple to test the mixed traction.

Starting in 2020, DB Regio will operate its Rheintal-Netz services in southwest Germany exclusively with new Siemens-built, 160 km/h EMUs. On 16 February 2017 the operator ordered 15 Desiro HC (High Capacity) and 24 Mireo EMUs. Significantly, this was the first-ever order for Mireo EMU family, which was introduced in 2016.

When the new EMUs are put into service, local passenger services in the Rheintal (Rhine Valley) will be restructured. There will be a network of REX (Regional Express) fast limited-stop services linking the principal urban centres. Beneath this there will be a network of slower, all-stations RB (RegionalBahn) services, a bit similar to an S-Bahn network. The number of trains in service will also be increased. The new EMU fleets have been ordered with these objectives in mind.

The Mireos will be three-car 15 kV AC 16.7 Hz trains with a Bo’ 2’ 2’ Bo’ axle arrangement and a continuous power rating of 2,600 kW. They will be 69,860 mm long over couplings, and will have 220 seats. They will operate RB services between Offenburg, Freiburg and Basel/Neuenburg, and also Sunday RB services between Freiburg and Endingen/Breisach around the Kaiserstuhl.

All these new EMUs are being built at Siemens’s Krefeld works. Commissioning of both batches of new trains is expected to start in summer 2020.

Siemens introduced the Desiro HC design in 2014 and received its first order in February 2015 for a batch of 82 trains for the Rhein-Ruhr-Express network.