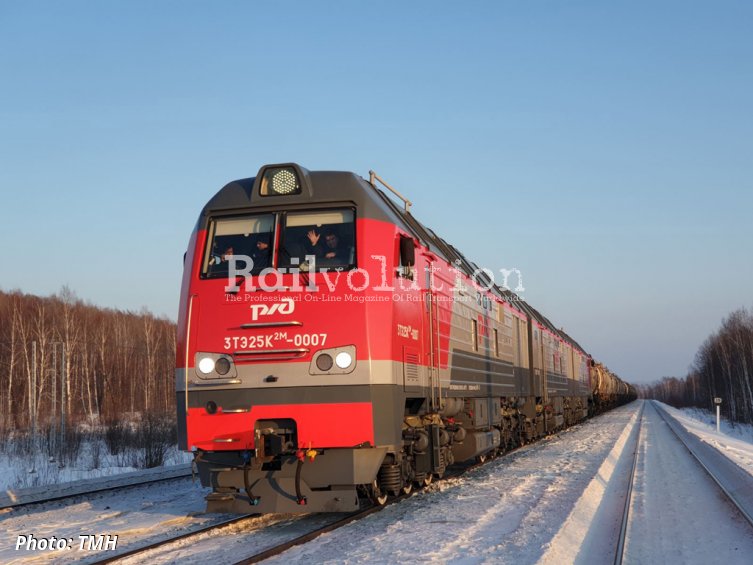 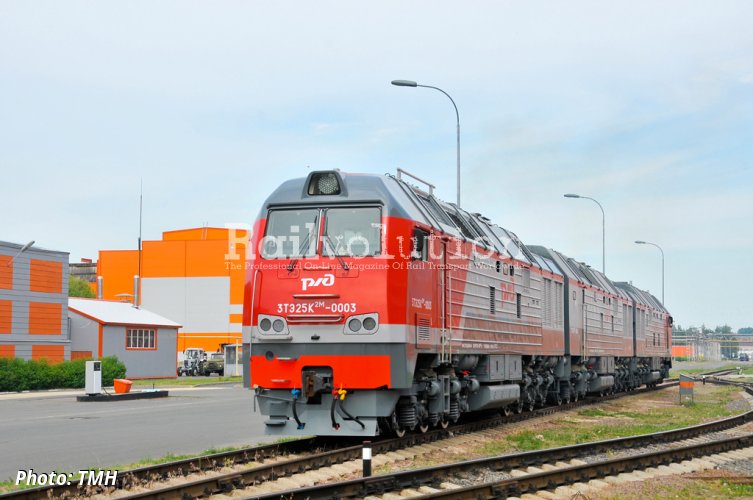 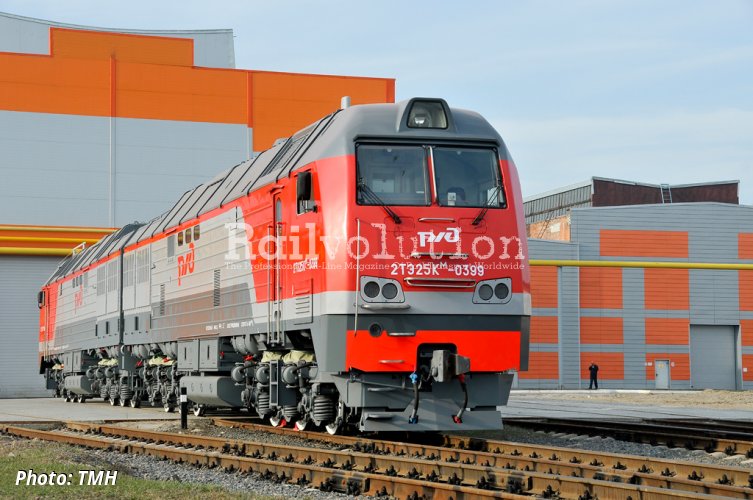 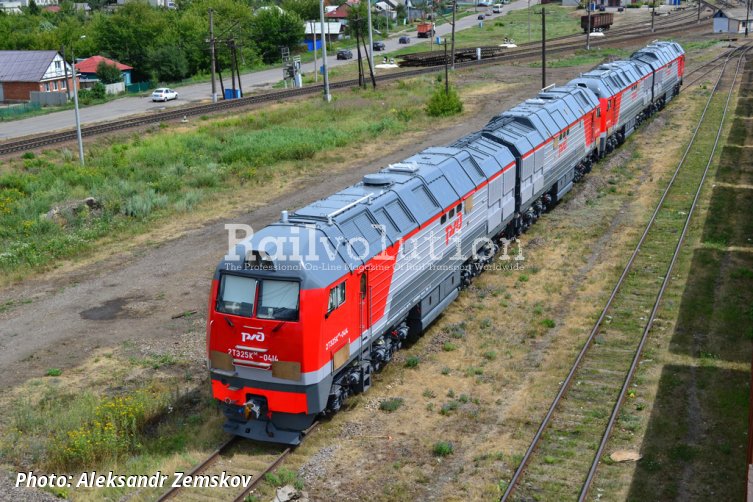 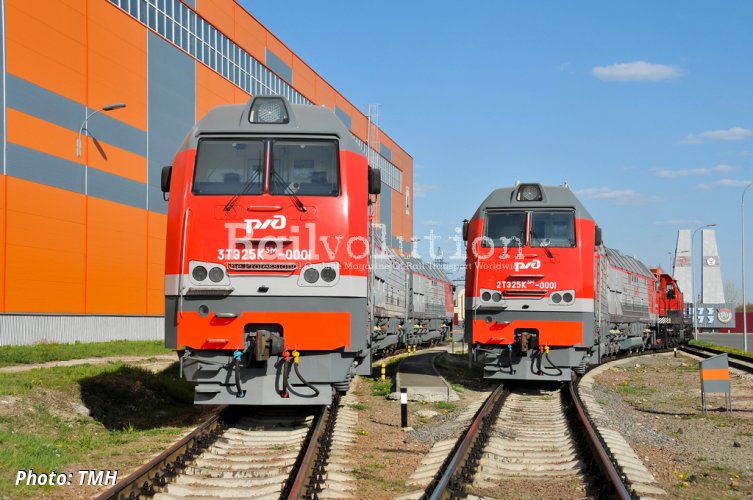 On 20 January 2020 the new three-section Class 3TE25K2M locomotives, built by BMZ, were introduced in the regular service at the Komsomolsk-na-Amure depot of Far-Eastern Railway (Dalnevostochnaya zheleznaya doroga). The first batch to this depot includes 12 machines, including three prototypes - 3TE25K2M-0001 and 0002 built in 2017 and 3TE25K2M-0003 built in 2019. Tests of this new class were completed in October 2019 and in December 2019 RZD signed a contract for the supply of 12 machines.

On 13 January 2020 the Komsomolsk-na-Amure depot took over all 3TE25K2M-001 to 012 locomotives, and by 20 January five of them were ready for operation. The remaining seven are to follow by the end of January. The locomotive commissioning is not carried out exactly according to the order of the inventory numbers.  It is envisaged that using the Class 3TE25K2M locomotives will increase the throughput of lines on the Far Eastern and Eastern Siberian railways from Taksimo on BAM, where the trains changes from electric to diesel locomotives, to haul them to the port terminals of the Sovetskaya Gavan-Sortirovochnaya station.

For 2020 at least 40 Class 3TE25K2M locomotives are planned to be delivered to RZD, starting with 013. For their maintenance, a center for warranty service and technical support for service work was created in the Komsomolsk-na-Amure depot.

A three-section Class 3TE25K2M was created in 2017 for operation on the BAM, to haul trailing loads of up to 7,100 t under harsh climatic conditions. It has a top service speed of 100 km/h and General Electric 12-cylinder GEVO12 diesels, rated at 3,100 kW, with one prime mover per section. This class carries the designation 2M, standing for Second Modification. The design of the locomotive makes it possible to create even a four-section version, which would result in a total power of 12,400 kW.

A first prototype, 3TE25K2M-0001, outshopped in February 2017, was exhibited at EXPO 1520 that year. It was followed by 3TE25K2M-0002, in May 2017, which for testing purposes was built as a two-section locomotive. Both prototypes were built at TMH’s own expense and during 2017/18 winter tested on BAM under real commercial operating condition. All necessary tests were completed in February 2018 and on 1 March 2018 BMZ received from RS FZhT a certificate of compliance with TR TS 001/2011 for Class 3TE25K2M and its two-section version 2TE25K2M.

Compared with the Class 2TE25KM, which requires inspections every 75,000 km, the Class 3TE25K2M (2TE25K2M) locomotives require routine inspections once every 100,000 km. To enable this, the design incorporates a number of innovatory features: roller bearings in the nose-suspended traction motors, screw compressors, AC auxiliary drives and suchlike. A third prototype was completed at the BMZ works in June 2019. This is 3TE25K2M-0003, which was built incorporating experience gained from testing the two previous prototypes. Its new design features are:

- two central control blocks to ensure that the control circuits are redundant,

- the power loading of each section is balanced according to performance requirements at any given time,

- the layout of the machinery spaces has been modified, and ventilation of these has been enhanced,

- the centre section now has the corridor through the machinery space redesigned to facilitate train crew movements,

- the driving console have been rede-signed to improve more ergonomics, and to ensure that the materials used are more durable,

- LED headlights are used instead of incandescent bulbs,

- the design of the axlebox housing has been modified and lubrication of the wheel flanges is done using a liquid lubricant.

In 2019 BMZ developed Class 2TE25K3M, a Third Modification (3M) version of the Class 3TE25KM. These 100 km/h locomotives are equipped with 2,850 kW Type 18-9DG diesel engines, produced by Kolomensky zavod, enabling them to haul heavy freights. The two-section version will be capable of hauling a trailing load of 6,200 t up ramps as steep as 9 ‰, while the three-section version will be able to attack similar ramps with a trailing load of up to 9,300 t. On 15 May 2019 the two-section 2TE25K3M-0001 and three-section 3TE25K3M-0001 prototypes were sent to the VNIKTI in Kolomna for preliminary testing. Once this has been completed satisfactorily, 3TE25K3M-0001 was sent for testing to Kursk-Sortirovochny depot, to clock up 10,000 km on test runs on the local network.