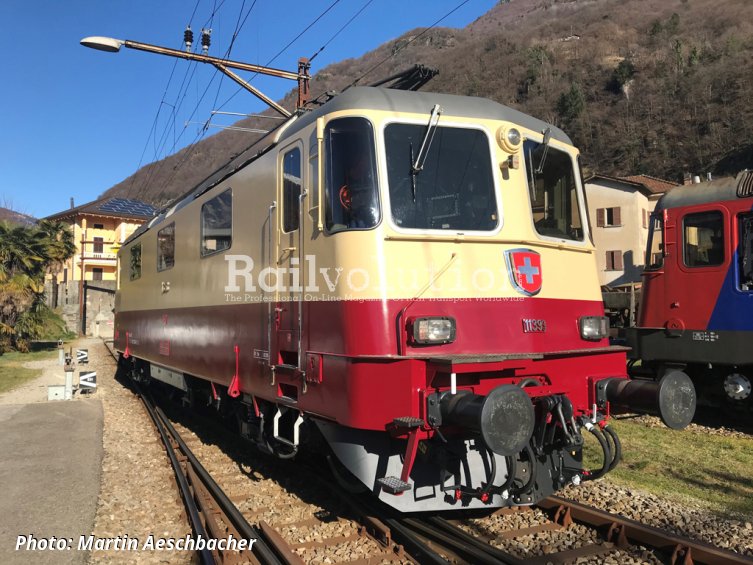 On 28 February 2020, International Rolling Stock Investment (IRSI) took over Re 421 393, which was overhauled at SBB Bellinzona works.

The locomotive, which in September 2019 was sold by SBB Cargo to IRSI of Frauenfeld, is used by an IRSI sister company TR Trans Rail of Frauenfeld. Until 29 December Re 421 393 hauled trains during the sugar beet campaign for the Frauenfeld sugar factory, or was used elsewhere in special transports.

Between 6 January and 28 February 2020 the locomotive was revised at Bellinzona and left the works in a historical TEE painting. The 1985-built Re 4/4 II locomotive will now be used mainly by TR Trans Rail for charter and special trains or for test runs, these being the company’s principal activities.

Moreover in autumn 2020 the „new“ TEE locomotive will again haul the sugar beet trains for the Frauenfeld sugar factory. In addition to the certification for Switzerland, the locomotive is also approved and fitted for running in Germany and Austria.

IRSI also has a second Re 4/4 II locomotive, Re 421 387, built in 1984 and purchased from SBB Cargo in late 2019. It was also used, together with Re 421 393, until 29 December on trains of the Frauenfeld sugar factory. On 28 February it was sent to the SBB Bellinzona works for an overhaul, scheduled for completion in late April. Its future painting is discussed at the moment.

IRSI, which was founded in 2019, also has TRAXX 482 047, acquired from SBB Cargo on 1 February 2020. It is also possessing an approval for operation in Germany and Austria and is currently in use for IRSI’s partner company, IGE, in Germany with the aim of the cross border operation.