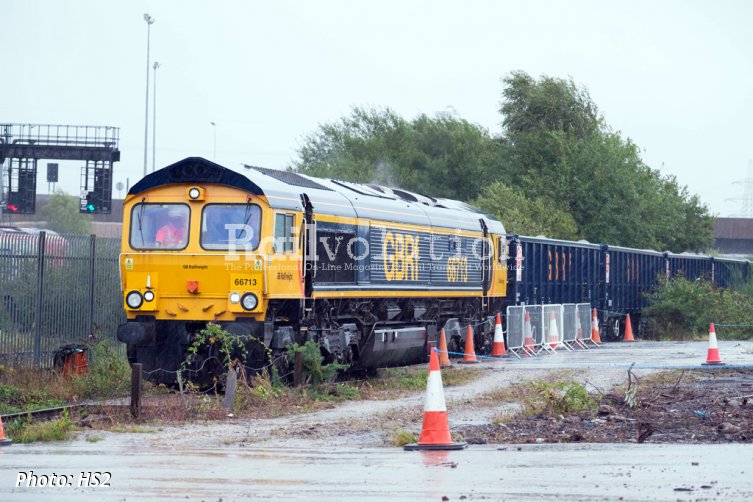 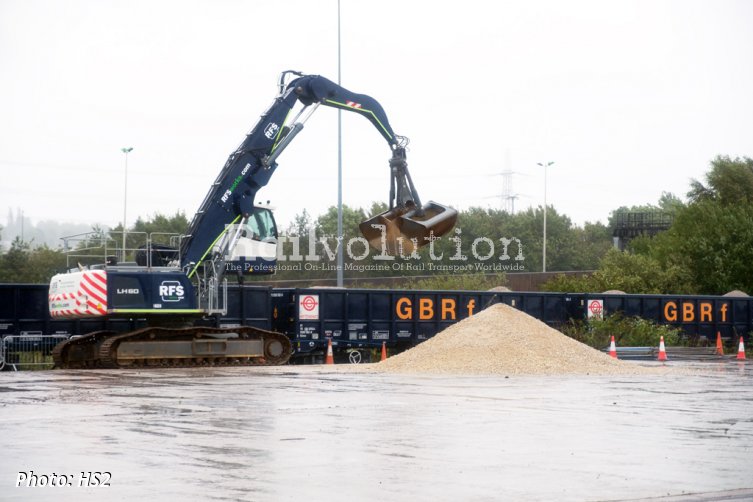 25 August saw the first rail freight delivery of aggregate arrive at HS2’s Washwood Heath site in Birmingham, signalling the start of HS2’s major programme to take up to 1.5 million lorries off the roads to cut carbon emissions. Over the next decade, up to 15,000 freight trains will haul 10 million tonnes of aggregate to HS2 construction sites. Each freight train replaces around 70 lorries, representing a massive reduction in carbon emissions and marking a significant investment for Britain’s rail freight sector.

The Washwood Heath Railhead site, managed by HS2’s main works civils joint venture Balfour Beatty VINCI, took the first delivery from HS2 preferred aggregates supplier Rail Stone Solutions (RSS) and their rail haulage partner GB Railfreight. Over the next four months, more than 150 trains will bring up to 235,000 tonnes of stone from quarries in the Peak District, equating to keeping an estimated 13,000 lorry movements off the road.

At Washwood Heath, 10 trains per week will each bring around 1,500 tonnes of aggregate supplied by RSS, which will be used to construct a large piling platform for the Bromford tunnel approaches, railway embankments, as well as haul roads around the site, which helps to limit the amount of vehicles on the public highway. Bromford Tunnel is the most northerly tunnel on Phase One, taking the railway in to Birmingham towards its destination at Curzon Street station.

A peak of around 17 trains per day will serve the Phase One programme beyond 2022. Other sites include HS2’s Rail Logistics Hub at Willesden which will welcome up to eight freight trains a day between 2020 and 2024. These will haul a total volume of around six million tonnes from the Euston approaches, including excavated material from tunnel boring machines - saving the equivalent of up to 300,000 lorry movements.

Almost one million tonnes of spoil arising from Euston station will also be removed by rail - the equivalent of up to 50,000 lorry movements. In addition, starting later this year approximately six million tonnes of aggregate will be delivered for works in the central area of the Phase One route, preventing up to 335,000 lorry movements from having to make the long journeys from the quarries supplying the material.

HS2 has been working with Network Rail for a number of years to ensure that capacity on the rail network is available for HS2’s contractors to deliver their requirements by rail rather than road.

Rail Stone Solutions (RSS), part of the GRS Group, is a stand-alone venture dedicated to consistent delivery of large volume of aggregates for major projects like HS2 in the most efficient and cost-effective way possible. The company’s unparalleled capability comes from its supply agreements with major materials producers, and long-standing partnerships with rail, road and marine freight operators.

GRS is Britain’s only nationwide trader and transporter of aggregates, building products and recycled construction materials. The company moves millions of tonnes of materials each year and is a key supply-chain partner to numerous major infrastructure schemes.

GB Railfreight is one of the largest rail freight operators in the UK, providing efficient transport for the country’s critical industries. One of the fastest growing companies in the railway sector, GBRf moves more than a fifth of Britain’s rail freight. The company’s 900-strong team works across numerous sectors including containerised freight, infrastructure, construction materials, energy and waste/recycling.