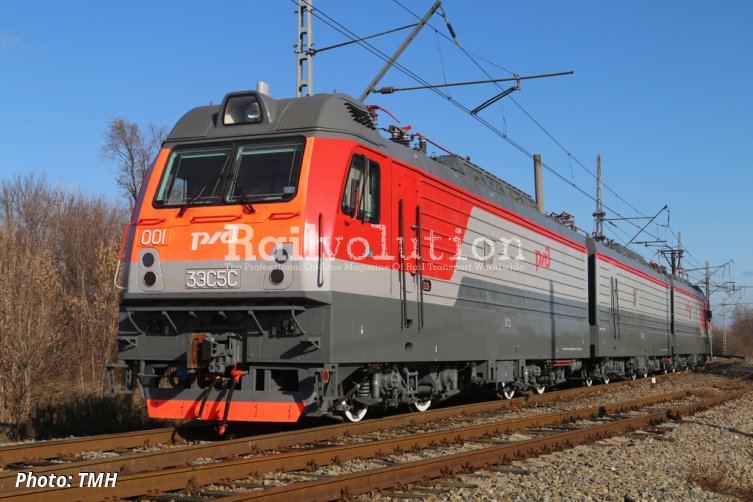 On 13 January 2020 was successfully finished the supervised operation of a prototype three-section Class 3ES5S asynchronous freight locomotive built by NEVZ. During tests on the Severo-Kavkazskaya doroga (North-Caucasus railway) the locomotive performance of hauling heavy trains was evaluated and the energy efficiency was measured when some of the 12 traction motors were disconnected when the locomotive was carrying a light train The locomotive successfully completed nine test runs, hauling trains weighing 7,100 tons, on the Likhaya - Novorossiysk (529 km) and Krymskaya - Grushevaya (25 km) lines, with climbs of up to 16 ‰.

3ES5S-001 is a modification of the two-section Class 2ES5S main line freight electric locomotive, fitted with a third, booster section. This enables it to haul freights with trailing loads of 7,100 t or greater. 3ES5S-001 is capable of a top service speed of 120 km/h, has a one-hour rating of 8,800 kW and asynchronous traction equipment.

In general, the locomotive has successfully passed the necessary tests and is being prepared for certification procedures. It is also possible that a decision will be made for an additional stage of controlled operation, but essentially it is not required. Following certification the next step will be the introductory batch of Class 3ES5S locomotives. At present 3ES5S-001 is at NEVZ.