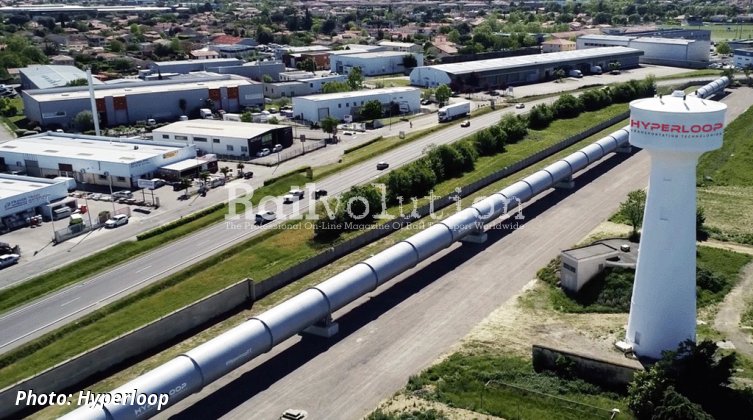 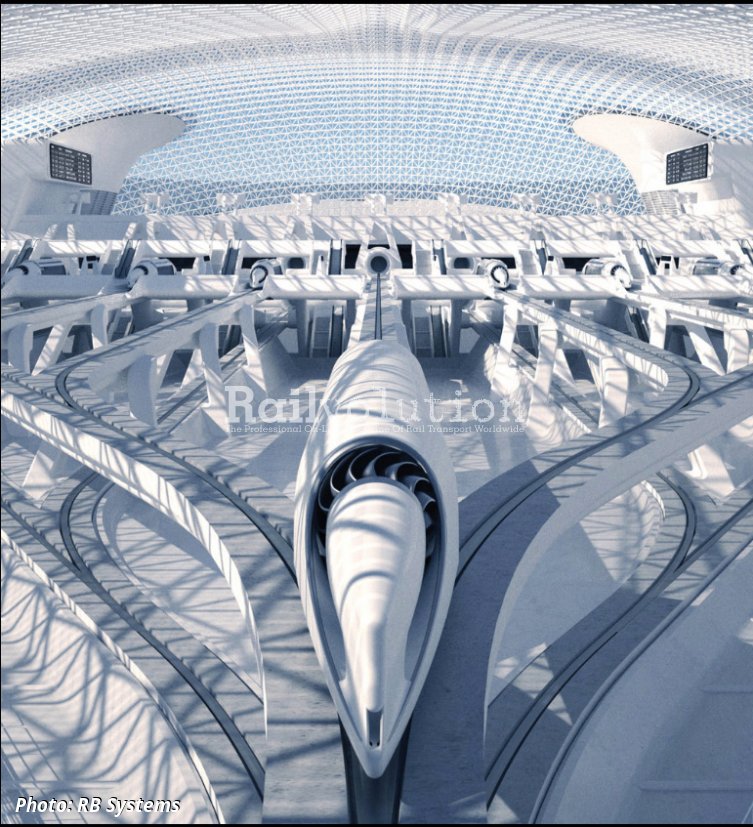 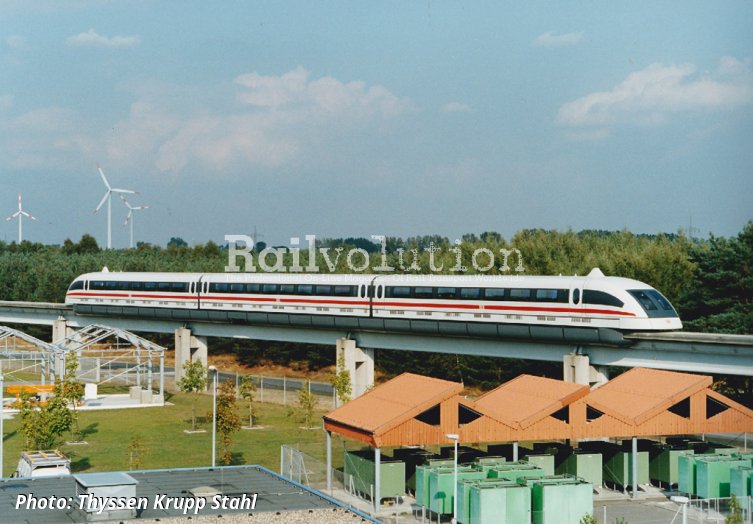 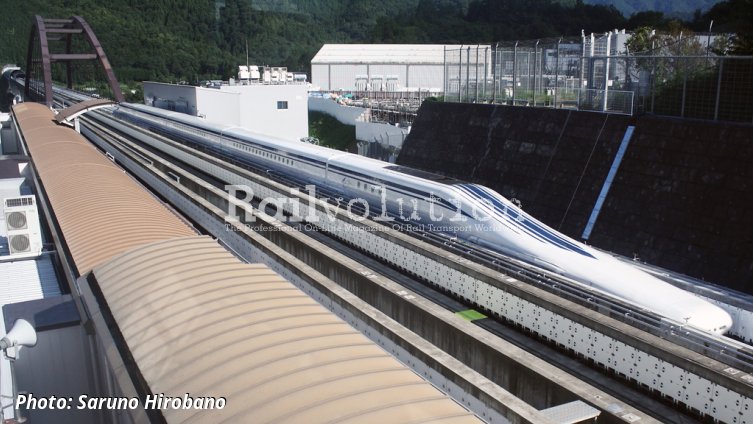 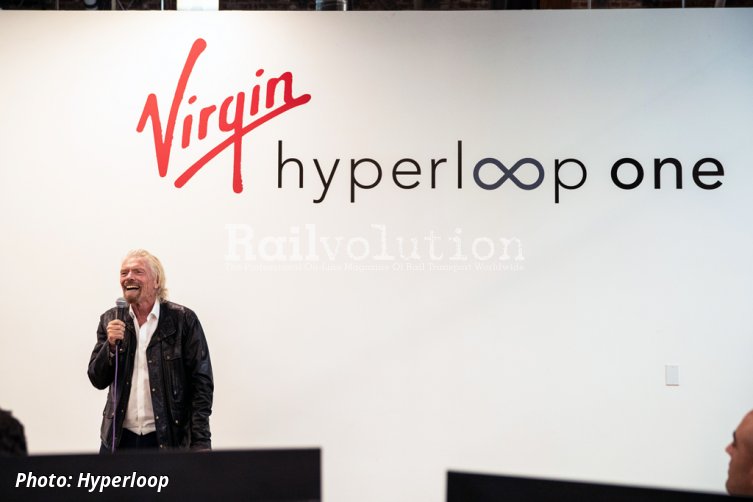 On 2 October 2018 at Puerto de Santa María, near Cádiz, the full-size prototype Hyperloop testing vehicle was presented at a works complex belonging to Airtificial, which was created by a merger of Carbures and Inypsa. Carbures was an international technology and engineering systems concern, while Inypsa was a multi-disciplinary engineering and consulting firm, which had in the past worked together with major international concerns, such as Boeing and Airbus.

The presentation event was timed to coincide with the fifth anniversary of the founding of HyperloopTT, which awarded Carbures the 2.1 million EUR contract to build the test vehicle in 2016. It is known as Quintero One, or Quintero 01, and its bodyshell is made almost completely of two layers of a composite carbon fibre-based material referred to as Vibranium. There are 82 panels of this material, held in place using 75,000 rivets. The vehicle, fitted with 72 sensors, is 32 m long overall and weighs 5,000 kg, the accommodation area being 15 m long.

HyperloopTT claims that a bodyshell created using Vibranium has a strength which is eight times greater than that of one built from aluminium, and ten times stronger than one built using steel. Quintero 01 required 21,000 hours of design work and 5,000 hours for assembly - over a year of work. Following presentation, Quintero 01 was moved to HyperloopTT’s R&D centre in Toulouse. According to HyperloopTT, during 2019 the vehicle was to be equipped to carry passengers and fully prepared and fitted for testing.

If this is the case, it will be interesting to see how all the aforementioned technical problems relating to vacuum tube passenger transport are solved and how its operation will be organised to achieve the claimed transport capacity of Hyperloop vacuum tubes in reality. Let us now compare a Hyperloop system using such capsules, each with a capacity of 50 passengers, with a conventional high speed railway, with a service of, for instance, twelve 800-passenger trains per hour in each direction.

The latter railway would be capable of moving up to 9,600 passengers per hour, in each direction. To achieve the same capacity in a Hyperloop tube 192 capsules per hour would have to be despatched, in each direction, every 18 seconds - which is less than half the 40-second headway cited by Hyperloop. This is clearly beyond the capacity of a single tube, so several tubes, for vehicles travelling in each direction, would be necessary. That, of course, would push construction and operating costs up.

Hyperloop states that the current cost of building 1 km of vacuum tube would be around 1.8 million EUR. A pumping installation would be required every 1.6 km to maintain the vacuum in the tube. Each pumping installation would cost some 180,000 EUR. As an example Hyperloop cites a vacuum tube between Los Angeles and San Francisco, a distance of around 600 km. Here Hyperloop reckons that one mile of tube (1,609 m) would cost 18 million EUR. But since several tubes would be necessary to provide the intended level of transport capacity, so how the construction cost would then increase it is not difficult to estimate...

One of the new members to the „Hyperloop Club“ is Hamburger Hafen und Logistik Aktiengesellschaft (HHLA). On 5 December 2018 it announced its decision to create a joint venture with Hyperloop TT to develop and commercialise a system for the transport of shipping containers. The first stage in the project envisages the construction of an interchange at the HHLA terminal in Hamburg and the development of a capsule for the transport of containers within vacuum tubes. The joint venture then plans to extend Hyperloop technology to other ports and logistics centres, worldwide.

What steps took the Hyperport Cargo Solutions joint venture in 2019?

The Hyperport Cargo Solutions project team is working on laying the foundations for integrating a Hyperloop system into the processes of a highly automated container terminal. For example, we are investigating how and under what conditions the Hyperloop technology can be used in sea container transport or what dimensions a Hyperport would have. The aim is to develop a Hyperloop system for seaport handling and hinterland traffic and to bring it to market maturity.

Possible areas of application and economic potential are further identified and deepened. In addition, technical basics for the implementation of the handling of containers from the terminal area in a Hyperloop transport system are developed. The know-how and expertise of HHLA and Hyperloop Transportation Technologies complement each other.

Is the construction of the freight capsule already underway?

When do you expect to start building Hyperloop tubes in Hamburg?

If the economic and technical investigations are positive, the development of an integrated Hyperport demonstrator in a highly automated seaport terminal is planned for 2021. Commercial fields of application are currently being developed that are not limited to Hamburg.

So now we have to wait if the first functional and real Hyperloop tube will be built...

A complete caption for picture 1: The Hyperloop test vacuum tube at Toulouse-Francazal. It is worth noting here that the creation and maintenance of a vacuum is not an energy-saving and cost-effective matter, as the following example calculation shows. Reducing the pressure from 100 kPa to 0.1 kPa requires electrical energy of around 0.4 kWh per m3 to drive the vacuum pumps. For this 4 m diameter tube, 9,859 kWh is required to create a vacuum over just 100 m of its length. Hyperloop states that pumping installations could be spaced 1,600 m apart. That means that the vacuum pumps would require 16 x 9,859 = 157,753 kWh of electricity for pumps for one 1.6 km section of tube. And pumping also takes time. Hyperloop states that around four hours are required to reduce the air pressure to 0.1 kPa in its 500 m long DevLoop test tube.

A complete caption for picture 2: This is one of the few images of a Hyperloop terminal whose author really thought about the need for several boarding and alighting tubes and platforms, to ensure that frequent arrival and departures can take place. Nevertheless, the author neglected the all-important fact that Hyperloop is the vacuum system and its capsules must also run in the tubes even at stations. How energy-intensive a Hyperloop system would be if it was necessary to destroy and then re-create the vacuum at stations each time a vehicle arrives and departs - and what a time-consuming procedure this would be!

A complete caption for picture 3: If anyone would like to focus on magnetic levitation technology at any cost, there is already a Transrapid system with a maximum operating speed of 500 km/h, which has been tried, tested and proven for use at high speeds. It would be fast enough for most plans intended by Hyperloop, and moreover Transrapid does not have to deal with problems such as transport inside a vacuum tube. Despite the hypermodern design and technology, it is now a historical photo, as this Transrapid project failed to advance further. This photo dates from towards the end of the Transrapid venture in Germany, when a maglev line was proposed to link Berlin and Hamburg.

Transrapid 08 was the eighth generation of Transrapid vehicles, and it wore DB Fernverkehr livery. Here it is on the 31 km Emsland test track, between Dörpen and Lathen, with a return loop at either end. Transrapid was developed at the time before the widespread construction of high speed lines in Europe, when most express trains only reached a top speed of 160 km/h. Increasing running speeds to around 400 km/h using maglev technology was then perceived as a major advantage. But Transrapid suffered from various development problems, and although maglev technology is now commercially used in Shanghai, it lost many of its advantages in Europe once high speed lines designed for speeds of 300 km/h and higher were built. The belief that a railway system should serve the whole of a country, and not just one transport corridor, prompted the decision by the federal government not to go ahead with the construction of the Berlin to Hamburg maglev project.

A complete caption for picture 4: Japan is one country which has persisted in its efforts to develop maglev commercially for use over long distances. The 18.4 km Yama-nashi test track was used between 1997 and 2011 for high speed test runs and was then extended to 43 km and incorporated in a commercial project, the Chūō Shinkansen, which will eventually link Shinagawa (Tokyo) and Nagoya (285 km), this stretch of maglev line, 86 % of which will be subterranean, scheduled for inauguration in 2027. Construction is being undertaken by JR Central. By 2045 it is proposed that the line will then be extended southwestwards to Shin-Ōsaka, a further 153 km. The route followed passes through the Japanese Alps as far as Nagoya, the planned extension to Ōsaka via Nara. The operator will be JR Central, and the journey time between Tokyo and Nagoya will be shrunk to just 40 minutes.

The Yamanashi test track, situated to the north of Mount Fuji, was the scene of the world speed record for a manned passenger rail vehicle - 603 km/h - attained on 21 April 2015. Test running continues, the general public being invited to learn more about the project and observe test runs in progress thanks to the Yamanashi Prefectural Maglev Exhibition Center. The new 438 km maglev Chūō Shinkansen will form just 1 % of Japan’s 27,268 km rail network, most of which is 1,067 mm gauge, with the 1,435 mm gauge Shinkansen network as a whole currently being 2,764 km long. A mere drop in the railway ocean.

A complete caption for picture 5: Los Angeles-based Hyperloop Transportation Technologies, founded in November 2013, focuses on the development of Hyperloop projects worldwide. In early 2019 it had over 800 engineers, designers and technologists working in 52 multidisciplinary teams, with 50 corporate and university partners, and offices in Abu Dhabi, Dubai, Bratislava, Toulouse and Barcelona. So far it has been awarded contracts for Hyperloop project development in California, Brasilia, Slovakia, the Czech Republic, France, Indonesia, South Korea, India, Ukraine, China, United Arab Emirates and Germany.