Lavender And Jasmine On The Roof: Wiener Linien's Pilot Project For A Cool Tram Stop At Parliament 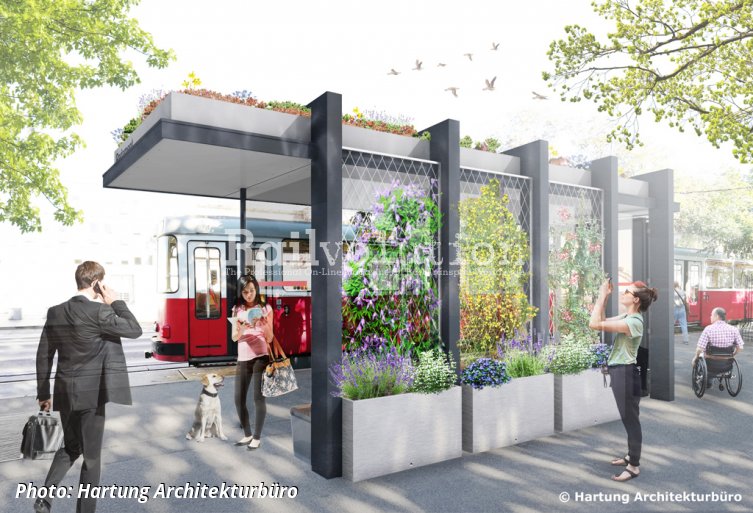 Under the motto “Greener Linien”, Wiener Linien is continuously implementing projects that make public transport even more climate-friendly. In the case of new tram and bus stops, the greening should be included in the planning in the future. In an innovative pilot project, a new green tram stop is being built opposite Parliament. For the first time it will also be possible to plant colorful flowers on the roof.

„We are fighting with a variety of measures against heat islands caused by climate change in our city. Greening at public transport stops provides shade and thus helps to lower the ambient temperature, an active contribution to the climate model city of Vienna. In addition, a colorful, blooming roof and green walls at tram and bus stops also contribute to the visual enhancement,“ says public transport city councilor Ulli Sima.

Together with the IÖB (Innovationsfördernde Öffentliche Beschaffung, Innovation-Promoting Public Procurement Initiative), creative greening models for newly constructed tam stops have been sought over the past few months. From a large number of submissions, the concept of the architect Bettina Hartung prevailed.

The tram shelter is being built and redesigned from scratch. Both the back side and the roof will be greened. In contrast to existing waiting halls, the construction also allows the roof to be planted for the first time. 16 different colorful flowers are used, such as lavender, winter jasmine and spherical leek, but also evergreen climbing plants such as honeysuckle. An integrated water reservoir ensures that rainwater is stored and the plants are adequately watered.
The new tram stop can already be admired from mid-September 2020.