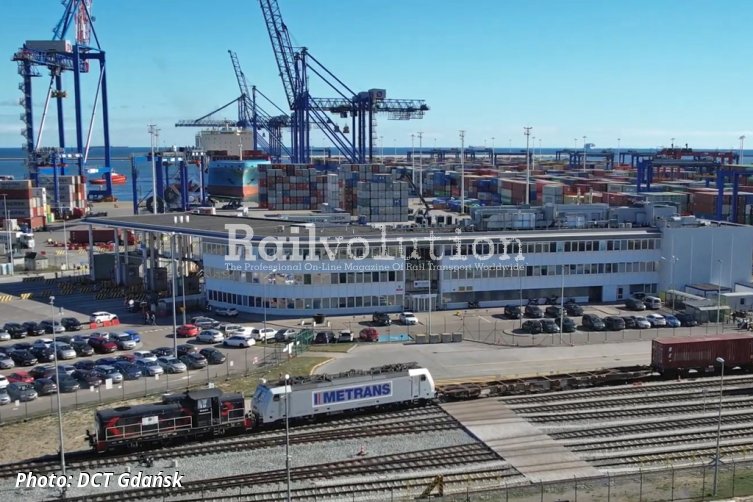 On 5 September 2022, METRANS started operating a line connecting two of its own terminals - in Šenov near Havířov (industrial Ostrava area) and in the industrial area of ​​Upper Silesia (Dąbrowa Górnicza) - with the DCT terminal in Gdańsk.

The train departs three times a week and in the Dąbrowa Górnicza - Gdańsk section uses the so-called Coal Trunk-Line (“Magistrala Węglowa"), on which it uses the 750 m train length, a standard feature there. Last year, DCT terminal in Gdańsk completed its extension, with increasing the number of reloading tracks from four to seven and their length from 618 m to 750 m and this enabled to invite additional services to be handled in the terminal, including those of such train length.

In the Havířov - Dąbrowa Górnicza section, the train is of 610 m length, which allows for 23 80-foot wagons, to which another five 80-foot wagons can then be coupled (resulting in total in 112 TEU, or 56 40-foot containers). Last mile to the DCT terminal is provided by CTL Logistics, however as of start of 2023, METRANS will hire one Gama Marathon locomotive fitted with the last mile module to be able to secure this by its own.

Although a train length of 750 m is otherwise excluded on the European 1,435 mm gauge network (except for rare cases, such transit through Denmark), it is standardly possible on the “Magistrala Węglowa”, which is almost a 500 km long line intended for freight transport, crossing Poland in a north-south direction. However, this represents a similarly extraordinary case as the so-called Centralna Magistrala Kolejowa (CMK) in passenger transport, which links the Upper Silesian industrial area with Warszawa. In another part of the route, between Zebrzydowice and Czechowice-Dziedzice namely, the train “enjoys" another specifics of the Polish infrastructure, when it has a speed limit of 40 km/h due to requirement of 22.5 t axleload.

The intermodal connection of the Czech Republic and Polish ports thus experienced a significant increase in capacity, but this is not the first such case. Already since 2017, the train on the Paskov - Gdańsk route has been operated by Rail Cargo Operator, albeit only with a frequency of one pair per week. Demand of customers from the Czech Republic was low and available capacities of Polish ports and serving shipping lines small. However, all of these circumstances are currently beginning to change, creating the potential for possible increases in capacity and frequency. METRANS confirms that customers of the Gdańsk service also use it for consignments sent to countries further south, such as Slovakia, Hungary and Austria, and customers from Scandinavia are interested in connecting to Halkali, Koper or Trieste.