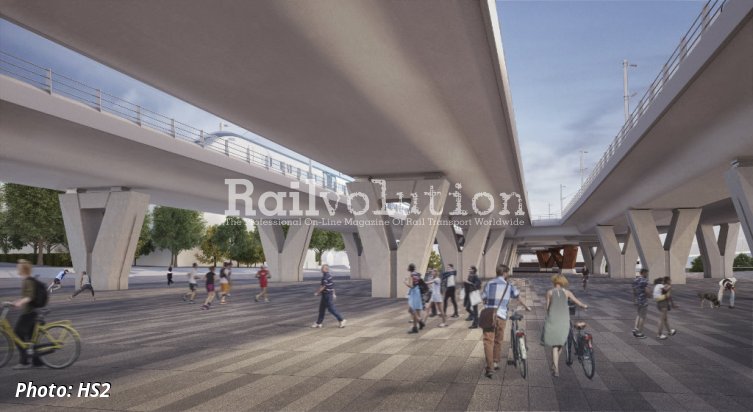 A number of design refinements have resulted in a shorter construction programme and less concrete needed to build the viaduct, bringing positive environmental and community benefits. The viaducts are being designed by a Design Joint Venture of Mott MacDonald and Systra and architects Weston Williamson + Partners, all working for HS2’s civils contractor Balfour Beatty VINCI joint venture.

The Curzon Viaduct No. 3 is approximately 300 m long, the height above ground level varies between 5 and 6 m, it is 65 m wide at the widest point and will be supported by 30 piers. As it approaches Curzon Street Station, the deck of the viaduct widens from a single deck at the eastern end to four separate decks at the western end.

The viaduct will widen to four separate decks near Curzon Street Station to maximise daylight in the public space underneath. "V" piers have been developed to support the viaducts because they take up less room at ground level and will also have a side recess for future potential services to be visually integrated. As well as separating the viaduct into four separate decks, the "V" piers will also help to maximise the opportunities to create a usable and flexible public space under the viaduct.

As Curzon Street No. 3 Viaduct crosses the Digbeth Canal, the concrete "V" piers are substituted with four inverted steel piers which reference the heritage of canal-side cranes in Birmingham. This also means the Digbeth Canal area will remain a visually attractive area to the public, combining the 21st century HS2 infrastructure and the 19th century Digbeth Canal area, ensuring a positive legacy for this part of the city.