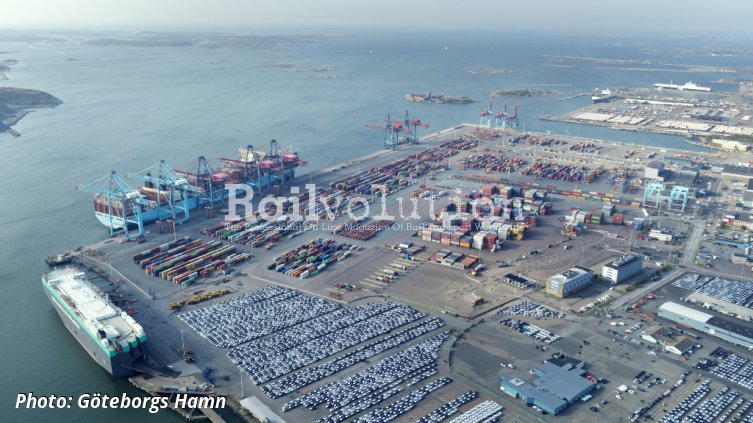 The global logistics system still pressured and continues to be affected by disruptions. While COVID-19 restrictions are lifted around the world, parts of Asia are suffering lockdowns with global repercussions. The Russian invasion of Ukraine affects European as well as global trade. In the Port of Göteborg however, volumes continue to increase. This is shown in the summary for the first quarter of 2022.

Russian trade via the Göteborg port is historically very small - in 2021, Russia-oriented goods accounted for less than 0.5 % of the handled cargo. The lack of Russian ships since Russia's invasion of Ukraine has thus not had a negative impact on the port's volumes during the first quarter of 2022. Instead, volumes have increased.

Together with the Göteborg port’s terminal operators and the goods owners using the port, it has also been possible to manage the effects of the pandemic's first two years, as well as the latest wave in Asia that has led to difficulties, for example in the world's largest port in Shanghai.

”Ultimately, the Port of Gothenburg’s volume upturn is the result of exemplary handling at all levels, from when the vessels arrive in the port area until they leave. When conditions are difficult and vessels call irregularly, extraordinary efforts are required from everyone involved, both on the sea and land side. It is the sum of these efforts we now see in black and white” said Elvir Dzanic, Port of Göteborg Authority Chief Executive.

In terms of container handling, volumes increased for the sixth quarter in a row. 212,000 containers (TEU) were handled during the first quarter of 2022, which means an increase of 4 %. It is also the highest total figure for the period January-March since 2014.

The Railway Is Increasing

A key component of a well-functioning port is the flow between port and inland. In the Göteborg port, some 60 % of container freight passing through the port is transported by rail. The high proportion of rail freight provides a great climate advantage and is also helps mitigating the current truck driver shortage affecting many other ports. The supply of truck drivers in Europe has been negatively affected by the pandemic, as well as by Russia's invasion of Ukraine.

In 2021, several new rail shuttles were introduced and the number of departures and volumes on existing shuttle routes increased. This can be seen in the figures for the first quarter of 2022, when 126,000 TEUs were transported by rail, which is the highest figure in the port's history.

The port's intra-European ro-ro traffic - which carries rolling goods to and from the UK, Denmark, Germany and the Central European hubs Ghent and Zeebrugge - increased by 5 % during the first quarter of the year as 147,000 ro-ro units were loaded or unloaded.

67,000 handled cars during the first quarter of the year is a very good figure historically, but a decrease of 7 % compared to the same period last year which was unusually strong.

On the passenger side in the ferry segment, a clear positive effect of eased travel restrictions can be seen. Passengers have started to find their way back to the ferries - 185,000 passengers means an increase of 177 %, but is not yet close to normal passenger numbers.

The cruise season started earlier this year than last year at the port, also thanks to lighter restrictions. Two calls were made during the first quarter.

Since very small volumes of energy products from Russia are handled in the Göteborg port historically, the total lack of Russian product has not meant any setback for the port's energy volumes. Instead, the volume handled has increased slightly, from 5 million tonnes to 5.3 million tonnes in the first quarter of the year - an increase of 5 % compared to last year.