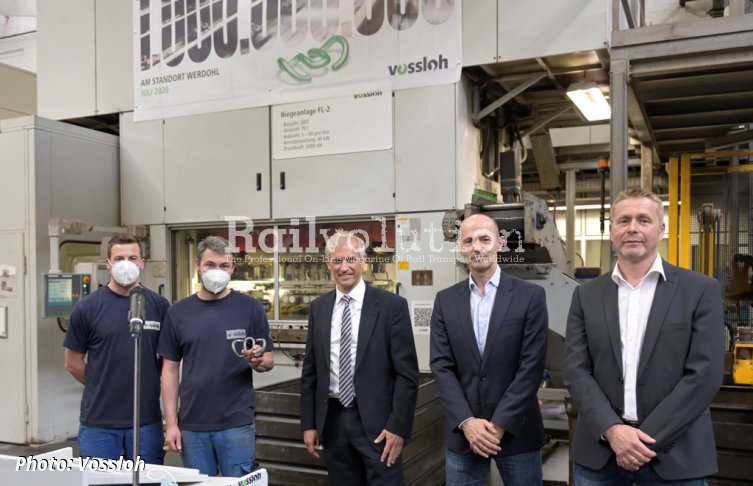 On 22 July 2020, Vossloh Fastening Systems celebrated the production of its one billionth tension clamp at its Werdohl site. This quantity is enough to equip some 150,000 km of track with rail fasteners.

On the occasion, Vossloh's CEO Oliver Schuster said: „The future depends on a past. We can, indeed we must, learn from our past. The establishment of this company and its development more than 130 years ago was only possible thanks to the incredible drive, the literal will to survive and the staying power of one man, Eduard Vossloh.“

Speaking to the workforce, Schuster referred to one of the largest investment projects in the company's recent history that is currently underway in Werdohl: „Something new is being created here: our Factory of the Future. I am proud of this commitment to our headquarters, of this project and of all of you who make sure each and every day that it becomes reality. We will very soon have here the most advanced production facility worldwide for rail fastening systems. And this means so much more than just addressing the second billion tension clamps. Above all, unlike in the past, we will also produce other components ourselves. And last but not least, our ecological footprint at the location will be smaller, i.e. better.“

In 1968, rail fasteners using a bolted elastic tension clamp were installed for the first time in a test track of the then Deutsche Bundesbahn. The product developed by Professor Herman Meier proved its worth and Vossloh was awarded the general license to manufacture the tension clamp. The history of Vossloh Fastening Systems reaches back even further. In 1883, the blacksmith Eduard Vossloh in Werdohl won an order from the Royal Prussian Railway for the production of spring washers for rail fasteners. By entering his company in the Companies Register at Altena Local Court on 11 July 1888, he laid the foundation stone for today's Vossloh Group.