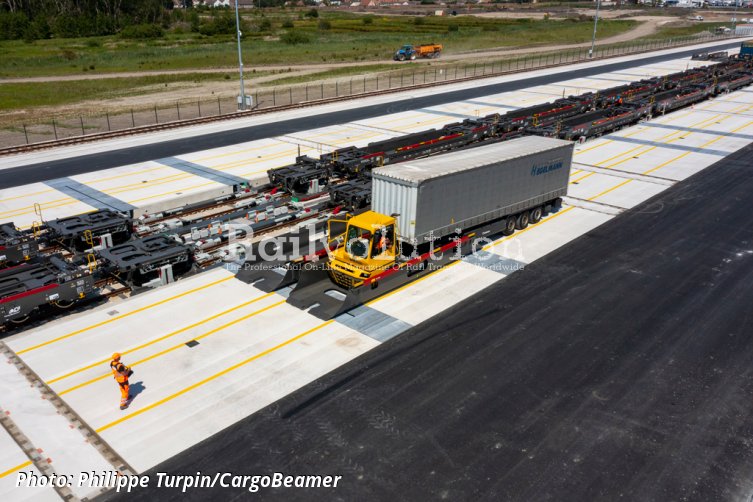 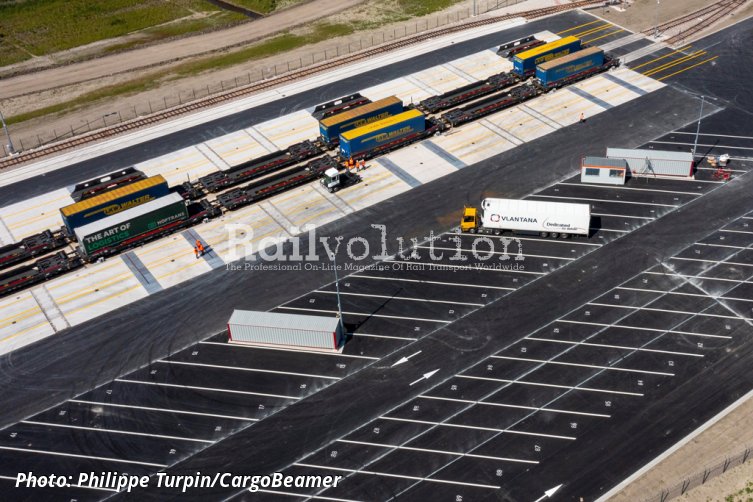 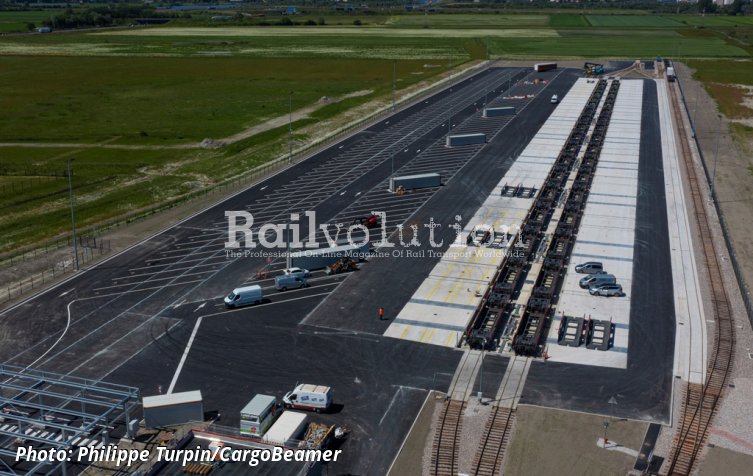 Until recently, CargoBeamer system has not seen wider use even after many years of existence, the Kaldenkirchen - Domodossola line being the only, on which long-term regular traffic was established. This is now changing and the first step towards expanding services has just been taken with the launch of a new route connecting the new Calais terminal with Perpignan on 10 July.

So far, there was still no terminal in permanent regular operation using the idea of the concept, i. e. transshipment by horizontal sliding of the loading module in which the semi-trailer is placed. One was permanently set up for testing and demonstration purposes in Leipzig-Engelsdorf, where CargoBeamer is also based, and a smaller transshipment facility was temporarily in operation at the VW car plant in Wolfsburg between 2013 and 2016.

The main reason why CargoBeamer has still not made significant inroads can be seen in the hight investment costs of the system, which, compared to conventional combined transport, requires technically more complicated and therefore more expensive transport and transshipment equipment.

However, this should finally start to change in the near future, as there is now apparent shift in peoples’ mindsets towards more environmentally friendly transport solutions, accelerating effort of supporting use of railways in Europe and political support, which can now more strongly overdrive the financial aspect and market mechanisms, using various supporting schemes.

In general, CargoBeamer states that it uses a combination of different financing instruments such as public support, loans and equity. Most recently, in December 2020, CargoBeamer entered into a 12.6 million EUR loan programme with the European Investment Bank. However the same shift in mindsets happens also amongst customers, which can be willing to pay higher price for a technology with positive effect on lowering carbon emissions, solving issues like traffic congestion and the shortage of qualified drivers. Especially the lack of personal is a highly polarizing one within many freight forwarders.

Besides that Cargobeamer is now in a period of „proofing“ what has been promised in the past years. First terminal is going to use and meanwhile frequency of the Kaldenkirchen - Domodossola line was increased from six to eight pairs per week (with departures on six days a week) in November 2020 and to eleven pairs per week as of 26 May 2021, the departures being now spread to all seven days in a week.

The long-planned transshipment facility in Calais, on the French side of the Channel, is complete now. With two tracks and 18 double-sided sliding transhipment modules outside, it should enable the automated unloading or loading of 36 semi-trailers in 20 minutes. During the eleven-month construction period CargoBeamer was joined by French construction company Eiffage. The construction of this transshipment facility was supported by European funds through the CEF programme with the sum of 7,015,401 EUR, representing 22.5% of the total eligible costs. The total cost were at around 32 million EUR. Additional support was provided by the French State and the Hauts-de-France region.

The terminal site in Calais allows CargoBeamer to handle six train pairs daily, which means six incoming and six departing trains per day. This results in a total of 432 semi-trailers for every day. A second expansion stage is scheduled for 2023 and will double the terminals capacity to a total of twelve daily train pairs.

In the first phase, regular services to Perpignan near the Spanish border are offered from 10 July 2021, starting off with two roundtrips per week. Euro Cargo Rail (ECR), a French subsidiary of DB Cargo, serves as cooperation partner. Each train offers a total of 36 seats for trailers, which consist of 24 CargoBeamer railcars and six usual double pocket wagons. As of 17 July the frequency will increase to four weekly roundtrips. Line to Domodossola should be launched from there by the end of this year.

On 25 March 2021, the CargoBeamer Italia subsidiary bought the site of the abandoned former Domo 2 conventional intermodal rail/road terminal in the border station of Domodossola. CargoBeamer is going to revitalize it and implement there automated CargoBeamer terminal technology. Construction is due to start at the end of 2021 and the current timetable foresees handover in 2022. After that, rakes of the Kaldenkirchen - Domodossola trains should be extended from 33 to 36 wagons.

A third terminal point using the CargoBeamer technology is under construction in Kaldenkirchen. The construction of automated CargoBeamer terminal components there will start shortly after reception of official building permissions, which CargoBeamer expect in 2021 or in 2022 at the latest. Similar to the previous two described, this will consist of 18 double-gate modules.

Until this year’s development of services, the fleet was numbering 75 wagons. Now it is strongly increasing. In April, deliveries of the new batch of 216 wagons started. They have been ordered by a contract concluded on 24 June 2020 with On Rail Gesellschaft für Eisenbahnausrüstung und Zubehör, Mettmann, with an option to deliver another 216 more.

With such big investment, CargoBeamer decided to change the way how the wagons are being manufactured. Those initial 75 wagons were assembled in well known factory in Halle-Ammendorf (run by MSG Maschinenbau und Service), just some 50 km from company’s seat, the main components of the wagons being produced in various plants in Germany and Poland.

The wagons built under the current contract are manufactured by Transvagon of Burgas, traditional partner of On Rail Mettmann. CargoBeamer is then purchasing them into own property. On 1 July 2020, it announced that it had negotiated a financing agreement for this order with UniCredit Leasing and Bayerische Landesbank.

CargoBeamer Rolling Stock GmbH, a subsidiary of CargoBeamer AG, acts as wagon keeper and ECM for the CargoBeamer cars. DWU Deutsche Waggon Union (DWU) acts as engineering and construction supervision partner. It is based just in the neighborhood of Cargobeamer in Leipzig-Engelsdorf and is already its established partner. DWU stands for more than 30 years of professional experience in the freight wagon industry in the planning and execution of maintenance services, for conversions and new constructions up to project management and supervision.

However, the new cars are not just for running trains from Calais and increasing the frequency of the existing line but also for launch of more new lines - CargoBeamer plans to increase its operation to up to six lines by the end of this year, Duisburg - Swarzędz being the first one (see below). With such increase of the capacities offered, CargoBeamer would like to use synergies and to include standard T3000e pocket wagons in its rakes for the transport of craneable semi-trailers also without full implementation of its technology. The loading module can also be handled vertically by standard crane mechanism. However this method is not the main target, being not too flexible and furthermore offered currently by more systems such ISU, Helrom (former Megaswing), Nikrasa and road2rail.

Another target for new opportunities is Duisburg. In January 2020, CargoBeamer announced the establishment of a cooperation and closing a deal focussing on a strategic partnership with Duisburger Hafen, the owner and manager of the local inland ports and transshipment facilities. The cooperation has even reached an ownership link, and in February 2021 it was announced that Duisburger Hafen had even taken a minority stake in CargoBeamer.

Already in 2020, groups of 4 - 5 wagons of this system were coupled in the train operated by CLIP Intermodal on the Duisburg - Poznań (Swarzędz) route for a few months, until operator of this train moved the German destination to DRT in Krefeld. Starting on 8 June 2021 CargoBeamer launched its own Duisburg to Swarzędz service, in cooperation with the Duisport Group, with three roundtrips per week. As there are only just standard reloading facilities available at the ends of this line, and there are no plans to establish the horizontal transshipment there in the near future, this train is composed of standard intermodal wagons and CargoBeamer wagons used for vertical reloading.

At the end of May 2020, a return trip of a loaded CargoBeamer train between Kaldenkirchen and Šestokai in Lithuania took place. CargoBeamer had long been focusing on eastbound transports, with the intention of a transshipment point at the junction of the 1,435 and 1,520 mm gauges, and for this trip it specifically mentioned the use of the newly built transshipment point in Kaunas, where the 1,435 mm gauge line would be brought. At this time CargoBeamer explains, that the use of its automated terminal technology in rail gauge switching terminals is still in its business plans, nevertheless timing and location is still under evaluation, as start with Calais, Kaldenkirchen and Domodossola terminals comes first.

In parallel CargoBeamer is working on development of CBoXX, a large-volume container featuring similar idea as the wagon modules - full automated movements during reloading in terminals. This should offer a new, more efficient opportunity for LTL/LCL (less-than truckload / less than container load) consignments. This patented technology is now under development and further public information is planned for the second half of 2021.