China To Europe Train Via Turkey 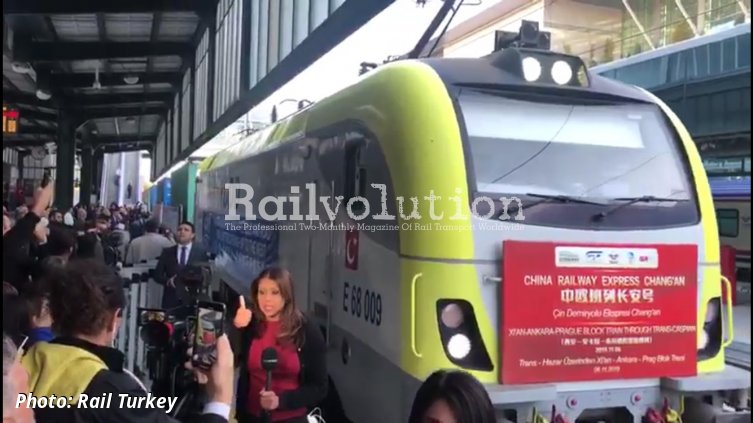 On the way is a freight train, which probably for the very first time from China to Europe used the transit via Turkey and Marmaray Tunnel. It was loaded in the city of Xi'an, the destination being the terminal operated by Rail Cargo Operator in Mělník, around 40 km north of Praha.

The train travelled on a route through Kazakhstan, the Caspian Sea, Azerbaijan and Georgia, using two recently completed infrastructure projects - the Akhalkalaki to Kars Georgian-Turkish link, opened for traffic in late 2017, and the Marmaray Tunnel. Furthermore, the transit via northern Turkey through Ankara is now possible for freight transport after a three-year closure. The Marmaray tunnel has just recently been opened for freight and this train should only be the second freight to use it. Given the attention that Turkey gives to this connection with China, the train was the subject of a big ceremony, which took place on 6 November 2019 in Ankara.

As the consignment of 42 40-foot containers was reloaded one by one to 42 60-foot wagons for the final 1,435 mm track gauge section, the train is too long for standard allowed length of a freight on standard gauge European network and was split into two parts in Plovdiv. The first one is expected to arrive in Mělník between 12 and 14 November.

Although Turkey has great hopes for use of this route for transit between China and Europe, the real interest is questionable, given the amount of borders crossed and the need to use the sea ferry. Available public sources (not even Chinese) do not indicate the date of departure of the train from Xi'an, the duration of the journey reported by various media varies from 14 to (more probable) 20 days. However, this train waited for about ten days in Ankara for the welcome ceremony. Waybills issued for the further way after reloading to the 1,435 mm gauge wagons in Akhalkalaki, Georgia, are dated to 23 October.