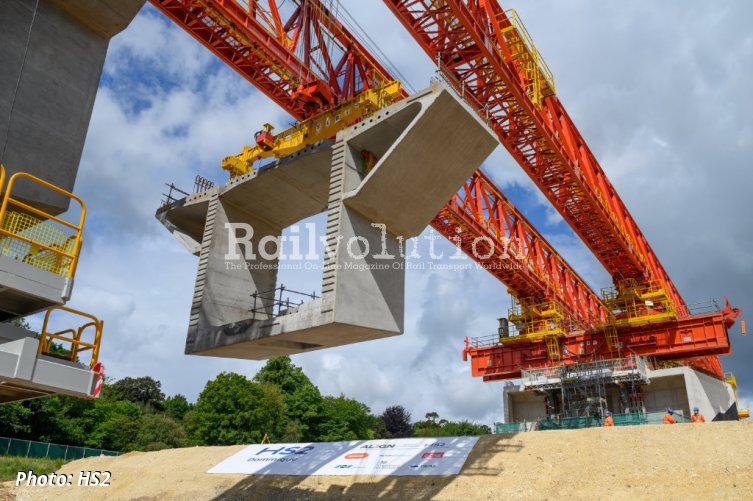 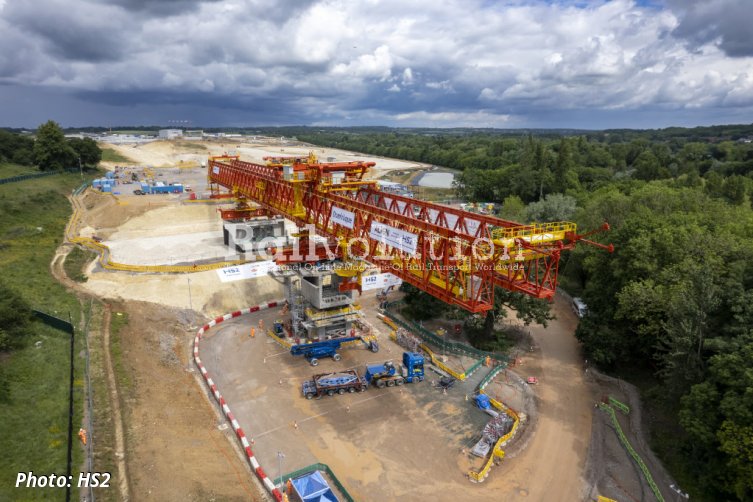 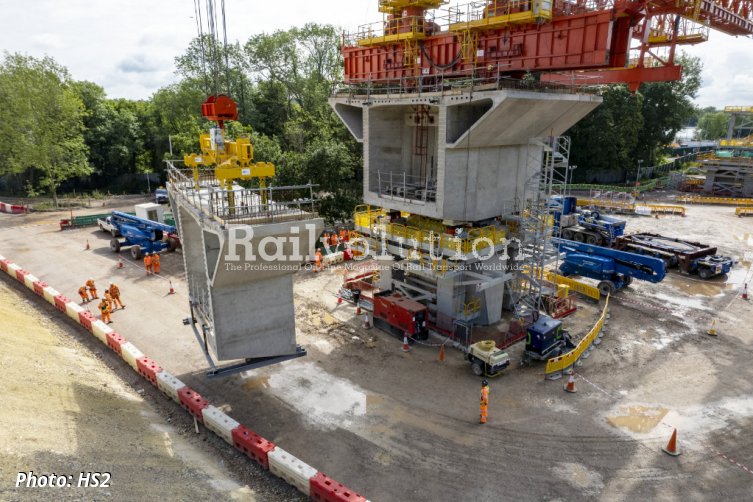 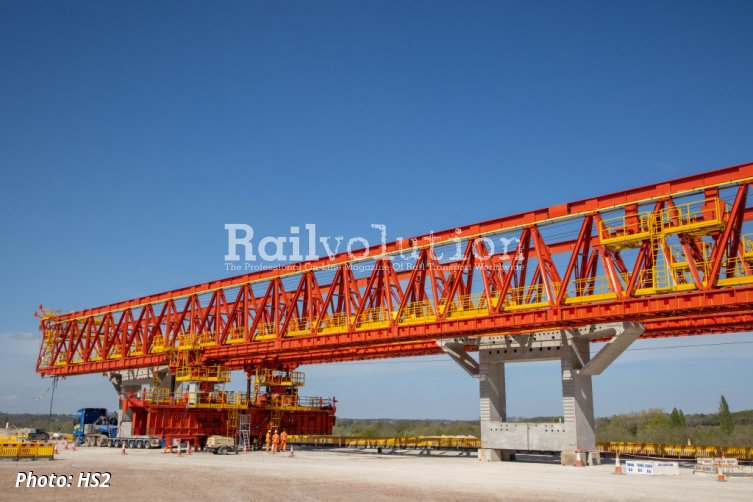 On 31 May 2022, HS2 announced the start of construction on the railway’s first and longest viaduct with the launch of an enormous 700 tonne bridge-building machine at an event attended by the HS2 Minister, Andrew Stephenson MP, just outside London. Stretching for more than two miles (3.4 km) across a series of lakes and waterways between Hillingdon and the M25, the Colne Valley Viaduct will also be the longest railway bridge in the UK.

The start of construction is the latest major milestone in the delivery of the HS2 project, which is designed to improve rail links between London, Birmingham and North, help level-up the economy and provide a low carbon alternative to car and air travel.

Known as a ‘launching girder’, the 160 m long bridge-building machine is the only one of its kind in the UK and will be used to lift the giant concrete deck segments that form the viaduct’s arches into position. Once each section is complete, the machine will inch itself forward into position to build the next stage. A total of one thousand deck segments will be needed, with each one weighing up to 140 tonnes. To allow for the gentle curves of the viaduct as it crosses the valley, all the segments are slightly different shapes and made on site at a purpose-built temporary factory close to the north abutment.

The huge viaduct project is being led by HS2’s main works contractor Align JV - a team made up of Bouygues Travaux Publics, Sir Robert McAlpine and VolkerFitzpatrick. Originally built in 2004, the launching girder was first used during the construction of the Hong Kong East Tsing Yi Viaduct. Specially designed to handle complex viaduct construction, the machine is named ‘Dominique’ in memory of Bouygues engineer Dominique Droniou who played a leading role in its design and development.

56 piers each weighing around 370 tonnes are being constructed along the Colne Valley ahead of the girder, with the girder moving from one pier to the next, installing the deck segments as it goes. One segment is put in place each side of the central pier, using a cantilever approach to balance the structure, as two half-arches either side of each pier are constructed simultaneously. Steel tensioning cables will be threaded through the segments to strengthen the bridge. Every segment will be a slightly different shape depending on where it fits into the viaduct and the modular approach was chosen to ensure quality, safety and efficiency.

The viaduct pre-cast factory where the segments are made at the peak of construction will cast around 12 segments every week using a ‘match-casting’ technique. This approach - where each segment is poured against the previous one - will ensure the whole deck fits perfectly when assembled on the piers. The mammoth 100 m long viaduct precast factory, which is visible from the M25, has an internal volume of 105,000 m3 - making it larger than the Royal Albert Hall.

Once construction is complete, the factory and surrounding buildings will be removed and the whole area between the viaduct and the Chiltern tunnel will be transformed into an area of chalk grassland and woodland as part of HS2’s ‘green corridor’ project.

The design of the Colne Valley Viaduct was inspired by the flight of a stone skipping across the water, with a series of elegant spans, some up to 80 m long, carrying the railway around 10 m above the surface of the lakes, River Colne and Grand Union Canal. Set low into the landscape, wider spans will carry the viaduct crosses the lakes, with narrower spans for the approaches. This design was chosen to enable views across the landscape, minimise the viaduct’s footprint on the lakes and help complement views across the natural surroundings.

In another visible sign of progress on the project, the team have also completed the construction of three of four jetties across the lakes to get equipment into position to support the construction and help take construction vehicles off local roads. Where the viaduct crosses the lakes, the piles are being bored directly into the lakebed, using a cofferdam to hold back the water while the pier is constructed.