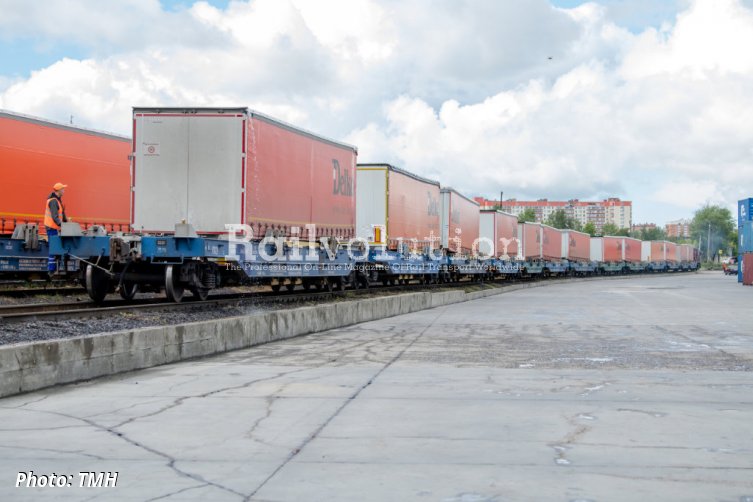 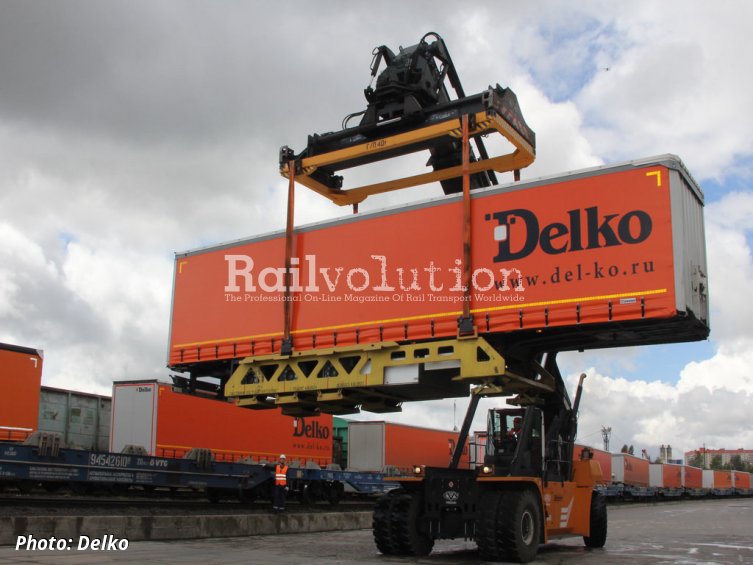 On 20 July 2022, Russia's first full-unit semi-trailer train with Model 13-6987 platform wagons manufactured by Transmash (part of TMH) ran from Silikatnaya station (south of Moskva) to Novosibirsk. It was organised in cooperatin with Delko, PFKO-Express and RZD, the wagons belonging to VTG. 30 semi-trailers laden with metallurgical products travelled about 3,300 km in 3.5 days on the Russian railways network, which is much faster than road transport.

The return journey also involved laden semi-trailers. A special timetable has been developed for the train, and the departure and arrival terminals have been prepared for loading semi-trailers. In future it is planned that the piggyback trains will start operating on that route on a regular basis.

RZD stated: „Previously we used to send 2 - 3 wagons with semi-trailers; today we have formed a complete train. We hope that with today's shipment we will attract new clients and additional freight. Only in the first half of this year, the volume of piggyback shipments via Russian Railways has increased more than threefold.“ Initially, on 4 July 2022 the first Delko semi-trailer was sent from Novosibirsk to Moskva on a piggyback platform as part of a train for test.

The transport company Delko was founded in 2000 in Naberezhnye Chelny (Republic of Tatarstan). In 2008, Delko opened its first subdivision in Moskva, and now is present in seven federal districts. Delko specializes in FTL-transportation (Full Truck Load) on the territory of Russia, CIS countries and international directions. The company's client portfolio consists of major federal players from the petrochemical, agricultural, retail, e-commerce and food production sectors.

PFKO-Express (Pervy federalny kontreylerny operator Ekspress, First Federal Contrailer  Forwarder Express) was established in 2018 and is Russia's leader in innovative projects in the field of piggyback transport. It operates 66 piggyback platforms. Currently, the company transports cargo along two routes: from Moskva to Novosibirsk and to Ussuriysk.

Transmash is the first company in Russia that has launched batch production of a semi-trailer wagons. Currently, more than 70 of them have been produced for PFKO-Express, which have been incorporated into a complete piggyback train. The Model 13-6987 wagon received certification in early 2020.

As can be seen from the photos, the wagons, which in Russia are called as "contrailer wagons" are based on the same idea as the so-called basket wagons in the European 1,435 mm gauge space, which was one of the first ways of transporting non-craneable semi-trailers. However, only small series of 60 basket wagons were produced in 1998 and they were abandoned soon, while rail carriers and rail customers in standard gauge Europe area preferred to purchase and transport craneable semi-trailers in pocket wagons, and in recent years other technologies have emerged for transport of non-craneable semi-trailers. However, Russia is actually inventing ways to transport semi-trailers on rail many decades behind standard-gauge Europe, so it could be fine-tuned further in the future. Furthermore, in the conditions of the generous loading gauge of the CIS area, loading gauge is not as restrictive feature as in the 1,435 mm area, so previous Russian designs were based on the use of standard flatbed cars with a continuous flat bed area, meaning not so sophisticated technologies being needed.