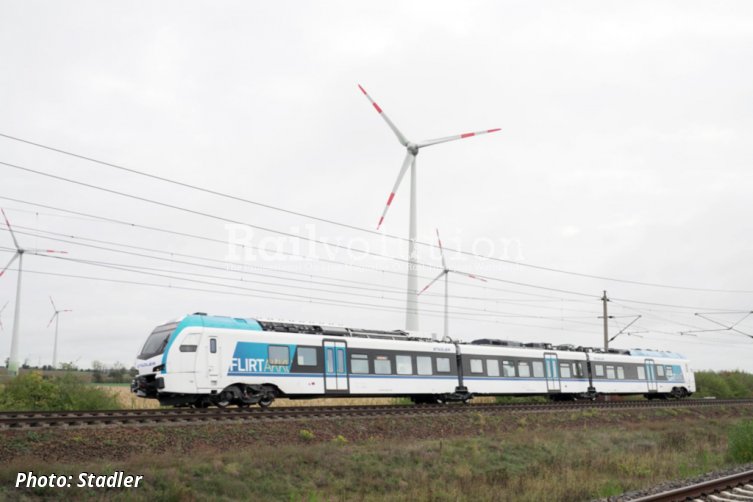 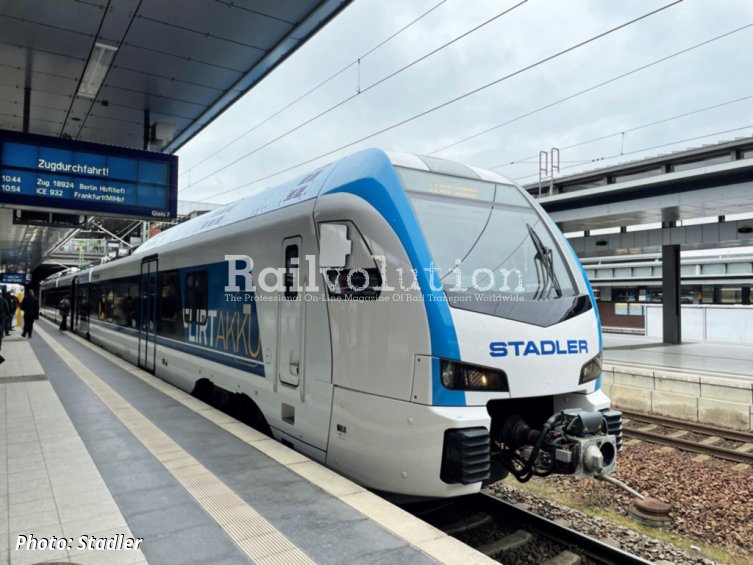 On 30 March 2021 Stadler announced that it has successfully completed a three-year research project with its FLIRT AKKU battery-powered EMU (or BEMU). „Akku“ is the abbreviation for „Akkumulator“, the German word for a rechargeable or storage battery, in other words, an accumulator.

In spring 2017 a three-car prototype was completed at Pankow works, its EVN being 94 80 1427 500-2 D-STAP (a shortened Stadler’s designation being 1427 000 A). In August 2018 it received all the necessary authorisation, this being achieved quickly, since it is very similar to a standard FLIRT EMU, and enabling it to make its inaugural passenger-carrying journey on 18 September 2018. Its first passengers were exclusively representatives of European public transport authorities.

The run was from the Pankow factory out to Schildow (in the northern outer suburbs of the capital) and back, a total distance of around 16 km, using the non-electrified Heidekrautbahn line which is used by Stadler to move its new-built vehicles from the Pankow works to the Velten commissioning facility, this railway being the only connection to the DB Netz network. On 25 October 2018 followed another presentation run, this time for media.

In order to optimise and improve the technology developed for the FLIRT AKKU the prototype underwent further extensive testing before being put into passenger service, and to further develop and test battery technologies for the railway vehicle sector. The project was funded by the German Federal Ministry for Economic Affairs and Energy and developed jointly with Technische Universität Berlin and EWE of Oldenburg (active in the business fields of energy, telecommunications and IT).

As part of the „FLIRT AKKU joint project - grid integration and grid-serving charging of a battery-electric railway vehicle for bridging extensive non-electrified or partially electrified route sections in regional transport“ Stadler developed a three-car test train. The technical feasibility of battery technology in rail transport and the limits of the installed battery capacity were explored on test runs set up specifically for this purpose together with the manufacturer of the batteries, the Zwickau-based Intilion GmbH (part of the Hoppecke Group).

Since September 2018, the test vehicle has covered 15,000 km in battery-only mode. The project team placed particular emphasis on testing of possible scenarios such as making up for unplanned delays on the line and operation in extreme weather conditions to test the response of the batteries. The test runs were, amongst others, carried out between Berlin and Herne or between Wustermark and Rostock.

In summer 2019 FLIRT AKKU was tested during a heat wave at +40 °C outside temperature and full use of the air conditioning, as well as in the winter 2021 during double-digit sub-zero temperatures. Use in battery-only mode was possible without restriction at all times, without us hitting the lower limit of capacity. The battery train far exceeded initial expectations with a proven range in battery-only mode of 185 km.

The "grand completion run“ was arranged between Berlin and Hennigsdorf on 23 March 2021, with different stakeholders on-board, marking the official end of the test programme. Stadler waited with this run until March as in December 2020 and January 2021 Germany was in the second full lockdown.

There is an interest among various operators and authorities to test FLIRT AKKU (in 2018 there were talks about the Heidekrautbahn), however Stadler states it needs to match this with the ongoing tests focused on improvement of the technology.

The FLIRT AKKU is essentially a standard three-car FLIRT 3 EMU, its main design modification being the installation of Lithium-Ion traction batteries both on the roof and inside the trailer end car. The train has conventional traction equipment enabling it to operate off 15 kV AC 16.7 Hz, and has a Bo’2’2’2’ axle arrangement.

The powered bogie has two 500 kW asynchronous traction motors (produced by Traktionssysteme Austria). The wheelbase of both end bogies is 2,500 mm, and the wheels of the latter bogies have a diameter of 920 mm when new, wearing to a minimum of 850 mm. The wheelbase of the non-powered Jakobs bogies is 2,700 mm, and the wheels have a diameter of 760/690 mm. Pneumatic secondary suspension provides a smooth ride for passengers.

The prototype has at present a top service speed of 140 km/h both when powered from the catenary and when using battery power. The operational range using battery power was at that time stated to be as much as 80 km. A full recharge of the batteries takes around 20 minutes. This is possible from the overhead wire on electrified lines, using the pantograph on the centre car. The batteries can also be recharged via regenerative braking until they are fully charged. It is also possible to charge the batteries from a „shore supply“ (such as the national grid) when the train is stationary for a certain length of time.

The FLIRT AKKU is 58,600 mm long over couplings, 2,880 mm wide and 4,120 mm high above rail top. The aluminium bodyshells are designed to comply with the EN 15227 crashworthiness standard, and can withstand a longitudinal compressive force of 1,500 kN. The entrance doors, of which there is one pair per car, are 1,300 mm wide, their thresholds being 780 mm above rail top.

The passenger accommodation is provided with good natural illumination, and the floor area is step-free, in spite of the height of the floor rising from 780 mm in the entrance vestibules to 1,200 mm above rail top over the end bogies. A large multi-purpose area is provided, the facilities complying with TSI PRM, there being one wheelchair-accessible WC cubicle and one of standard dimensions.

154 seats are fitted, including 16 in first class and 38 tip-ups. All seats are in a 2 + 2 configuration, and are in a mix of bays and rows. There is also space for up to 156 standees at a density of four per m2. The interior layout can be configured according to passenger requirements on specific routes.