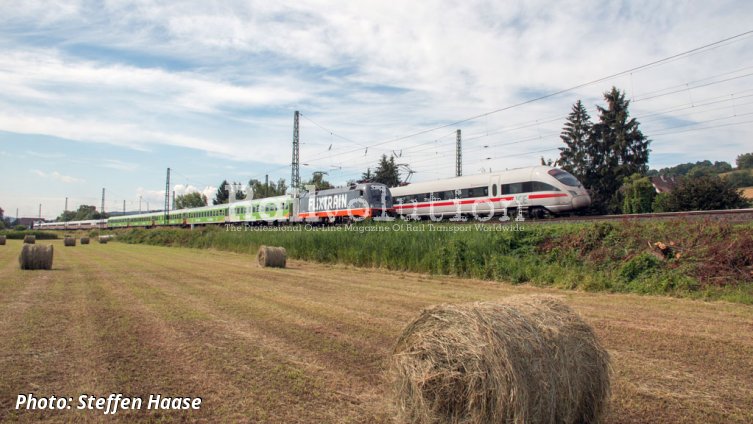 According to LE: „As the situation began to normalise in early summer, Leo Express began intensive negotiations on the resumption of operations. We were ready to start with almost 30 cars, and a total of 50 employees waited for the resumption of operations. However, FlixTrain refused repeated urgent requests from us and later even terminated the contract, without giving a reason.“

It was clear that the operation of the FLX 10 line would not start soon, at least under the Leo Express umbrella, as early as 20 August 2020, when the remaining nine cars, previously used on the FLX 10 line, were transported from their Stuttgart storage by Vectron 193 247 (of ELL) to Stuttgart. These Class Bimz and Bimdz cars (ex DB InterRegio) are owned by the Swiss rental company HEROS Helvetic Rolling Stock GmbH of Rheinfelden. On the locomotive windscreen there was a label „Leo Express Stuttgart - Berlin, we say goodbye“, which was further underlined by the black ribbons on the front of the locomotive.

LE started operating of Berlin - Stuttgart services for FlixTrain in August 2017, after the Locomore project ended, and it incorporated one or two pairs daily, depending on the day of the week. For this purpose LE rented locomotives and cars, and it has always described this operation as profitable and as a forefront for the development of its activities in Germany.

LE further claims that „FlixTrain has seriously breached its contractual obligations and damaged us, ... and it has significant debts to us this year in the order of millions of EUR, which it does not want or cannot pay. Due to the monopoly position of the FlixBus group in German private long-distance transport, it is not possible for Leo Express to continue working with another partner. The only realistic option was to file an insolvency petition against the Leo Express subsidiary in Germany, in which the claim will be asserted. The insolvency administrator will therefore continue to act on the matter."

We asked FlixTrain for its opinion (on 12 October): „The current situation represents a major challenge for the entire mobility industry. This also affects our partner companies. Leo Express has made business decisions in the last few months that have had an impact on the partnership with FlixTrain and the resumption of operations. Therefore the cooperation had to end.

We regret that Loe Express was not able to resume operations and that we will not be able to continue as a partner in the future. We would like to thank Leo Express for the successful cooperation over the past years. The Berlin - Stuttgart services, previously operated by Leo Express, will be offered to FlixTrain passengers again in the future. Since July, FlixTrain has resumed operating the Hamburg - Köln and Berlin - Köln services.“

Based on the fact that this is a completely opposite statement to that made by Leo Express, and that these conflicting views are reminiscent of the termination of cooperation with BTE on the FLX 20 and 30 lines, we asked FlixTrain for further comments (on 14 October): „In recent months, FlixTrain has made various proposals to Leo Express to resume operations and has offered financial support. However, Leo Express was not able to implement a resumption, so the collaboration had to end. We regret that Leo Express was not able to resume operations. We expressly reject the accusation of having unlawfully terminated the contract. FlixTrain fulfilled all existing financial obligations. We ask for your understanding that we will not comment on contractual details.“

As can be seen, from the position of a non-participant subject, it is unrealistic to assess how the whole matter took place. Although it can be estimated that the truth will lie somewhere in the middle and that there were circumstances that were not directly named (to a large extent, it will probably be a question of assuming the costs and risks of this operation). So we can only wait for what events the next period will bring in this direction.

As for FlixTrain, it has ordered by DB Netz the capacity on the Berlin - Stuttgart line for the 2021 timetable, so let us to wait which operator will provide the FLX 10 line when (if) it will be restarted. In addition, FlixTrain has been allocated the capacity on the Berlin - Hamburg line, on which DB will offer a higher frequency of ICE services from December 2020. In the meantime, however, FlixTrain has announced in late October that from 3 November 2020 it will stop its trains again due to the covid...

As for Leo Express, it will be interesting to see how (whether) its long time announced German activities will develop. The LE press release from September 2020 also stated: „Another blow to Leo Express in Germany was the approach of the federal government, which decided to support Deutsche Bahn in particular through a billion EUR capital increase to help it to overcome the effects of the coronavirus epidemic. The actions of the German government have de facto strengthened the monopolists in long-distance rail (and bus) transport, so LE will not seek to operate open access lines in Germany until fair conditions are set for new operators. In the future, Leo Express will focus on regional contract transport in Germany."