Mireo Plus B For NEB 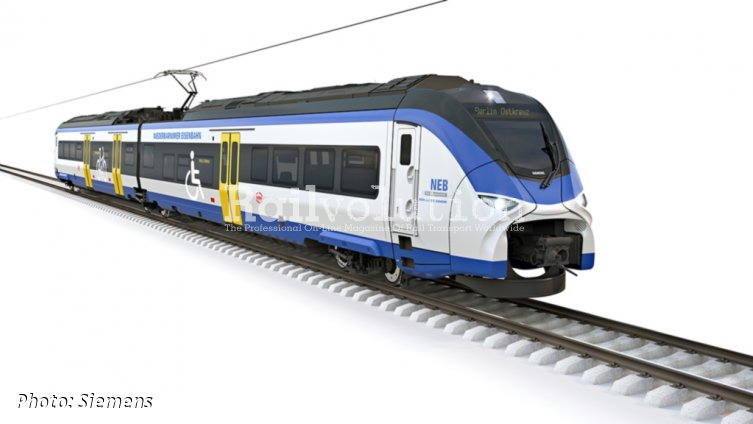 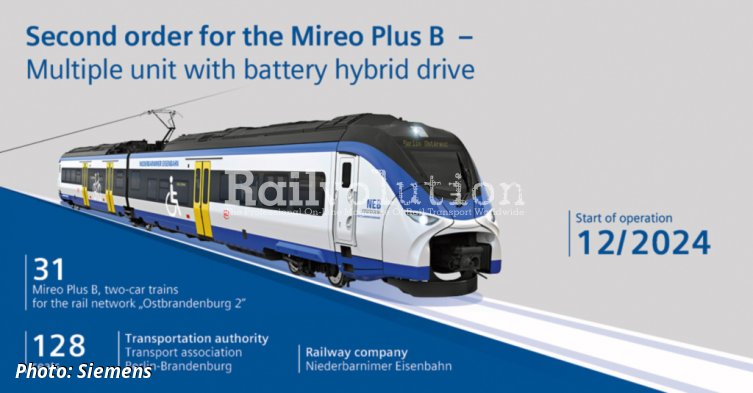 Starting in December 2024, the Berlin-Brandenburg Metropolregion (metropolitan area) will use its first regional BEMUs. With the start of the improved and expanded 2025 timetable, NEB (Niederbarnimer Eisenbahn) will provide passenger services on the Netz Ostbrandenburg (East Brandenburg network), using 31 two-car Mireo Plus B trains, ordered in September 2021 from Siemens Mobility.

For the latter network, covering lines RB12, RB25, RB26, RB35, RB36, RB54, RB60, RB61, RB62 and RB63, NEB won (again) the contract on 2 June 2021 in the international tender of the federal states of Berlin and Brandenburg, which are responsible for planning and financing regional rail passenger service in the VBB (Verkehrsverbund Berlin - Brandenburg) region. The Netz Ostbrandenburg operated by Mireo BEMUs will include following lines:

Only the RB26 Berlin Ostkreuz – Müncheberg (Mark) – Kostrzyn (Poland) line will remain to be operated by PESA-built LINK DMUs.

Initially VBB and NEB envisaged to buy only 26 Mireos. Subsequently it was decided to order 31 BEMUs, thus the fleet will be significantly increased compared to current situation: a total of 42 units will be will be diagrammed, 31 of the Mireo Plus B sets and 11 Class 632 LINK DMUs. The VBB contract was awarded for 12 years, the total annual volume being 6.7 million trainkm.

The tender of the states of Berlin and Brandenburg was clearly focused on alternative drive technologies and reducing environmental pollution. On non-electrified stretches of line Mireos will use the lithium-ion batteries - previously charged on the electrified sections. Recovered braking energy is also used for powering the train. The two-car Mireo Plus B has a battery-electric range of more than 90 km.

By switching from DMUs to BEMUs, the annual consumption of diesel fuel will be reduced by around 4.4 million litres. The new trains will also completely eliminate local CO2 emissions and, depending on the electricity mix, also cut overregional emissions by roughly 11,500 tons per year. At the same time, they will significantly reduce fine dust emissions.

The new Netz Ostbrandenburg network also meets all the regional rail transport quality standards set by the states of Berlin and Brandenburg. The new trains will provide additional services on the RB25, RB26 and RB60 lines. The Mireos will have 128 seats and 12 spaces for bicycles, wheelchairs, and buggies. They will be fitted with three doors on each sidewall, enabling passengers in wheelchairs or with buggies to board and exit barrier-free and fast. It is planned that on some services two Mireos will run in multiple to provide additional seating capacity (up to three Mireos can be operated in multiple).

In the Mireos passengers will also have a free WiFi access, a real-time passenger information system, and a specially designated family area. Around 60 electrical sockets are evenly distributed throughout the two cars, as well as USB charging ports and locations for inductive charging.

The Mireo order also includes a service and spare parts supply contract until December 2036. Siemens Mobility will ensure the availability of the trains over the entire term of the contract. Part of this service contract is not only to organise the performance of all necessary maintenance activities, but also continuously further develop maintenance activities, adopted to the customer-specific use of the vehicles.

On 25 August 2021, DB Regio and NEB have signed a contract for the maintenance of NEB's new Mireo Plus B fleet. This means that from the timetable change in December 2024, the BEMUs will be maintained and repaired at the DB Regio works in Berlin-Lichtenberg. With the conclusion of the contract, DB Regio and NEB are stepping up the common way in vehicle maintenance for the first time.

The LINK DMUs will continue to be maintained at the NEB facility in Basdorf. There will be carried out also the maintenance of the hydrogen trains to be procured for the RB27 line.