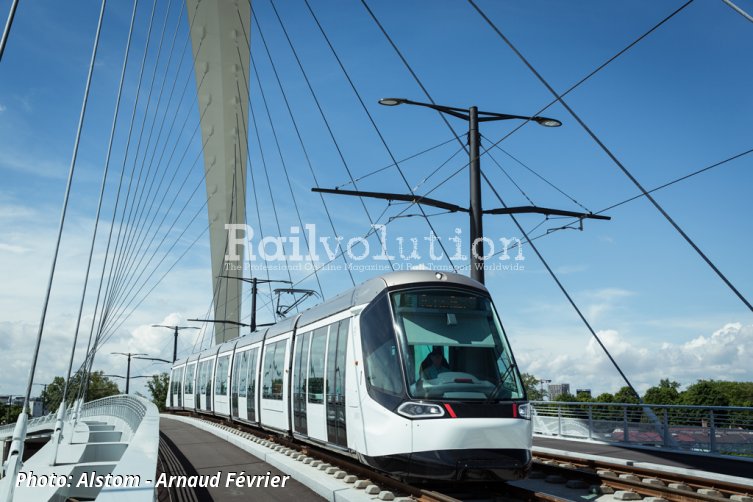 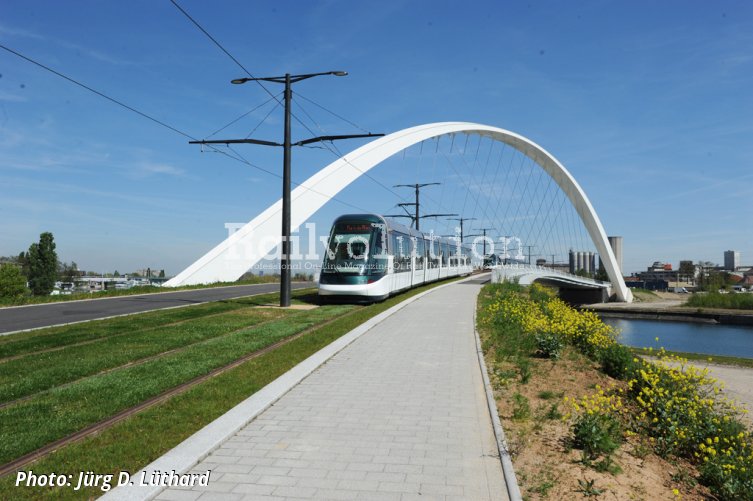 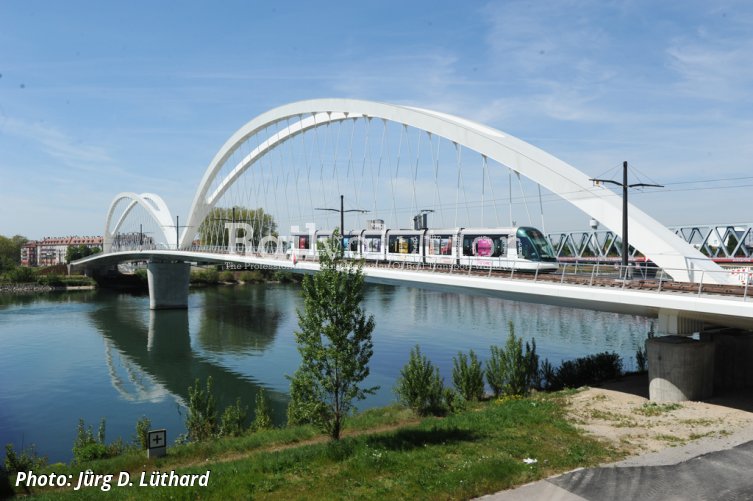 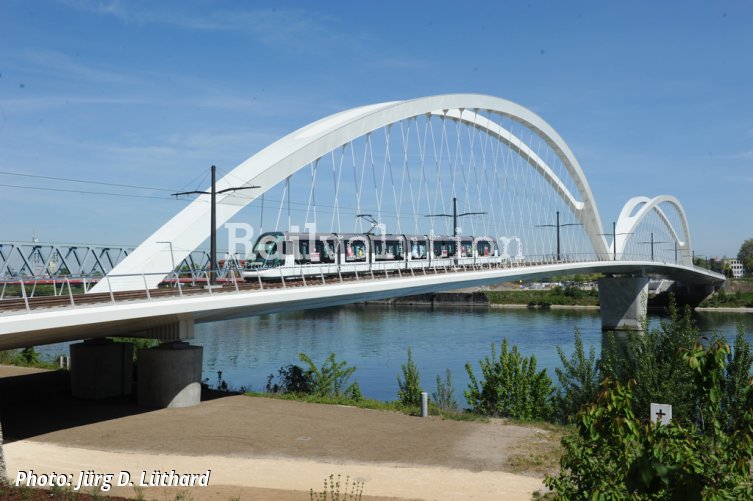 On 3 March 2020 Alstom announced that it will supply 17 additional Citadis trams to CTS (Compagnie des Transports Strasbourgeois) worth 52 million EUR. This order will complete the fleet of 63 trams delivered by Alstom between 2003 and 2019. These 17 new trams will reinforce the existing lines, including line D, which serves the city centre of Kehl in Germany.

Strasbourg’s second-generation urban tramway network dates from 1994, 34 years after the demise of the first network. 29 April 2017 saw the restoration of tram services across the Rhein to Kehl, in Germany, with the recasting of international local bus services and faster public transport journey times.

The history of trams in Strasbourg dates back to 1877, with electricity replacing horses in 1894. The network comprised both urban and interurban lines, and increased in length to 234 km (83 km urban, 151 km interurban) by 1930. One of the interurban lines, inaugurated on 14 March 1896 crossed the Rhein to Kehl, and on the right bank of the river a 95.5 km 1,000 mm gauge network developed, serving Rastatt, Bühl, Offenburg and Seelbach. Until 1918 the whole Strasbourg network was situated within the German Empire, and following the First World War the land on the right bank of the Rhein became part of the Republic of Baden, that on the left bank becoming French territory.

The tramway network east of the Rhein was first taken over by Deutsche Reichsbahn, then in 1923 by Mittelbadische Eisenbahnen. The international line was subsequently cut back to the Rhein bridge, being extended on 24 May 1942 to Kehl station, with an unfulfilled project to extend to the Rathaus (Town Hall). The right bank network was closed in stages between 1959 and 1980.

The last trams ran on the first-generation Strasbourg network on 1 May 1960, though increasing urban road congestion in the late 1980s prompted consideration of a new rail-based public transport system, the first of a fleet of 26 new seven-car Eurotrams, ordered in 1991, running on the 9.8 km Line A on 25 November 1994.

When shortly after the turn of the millennium new extensions to the network were built, more trams were needed, and in 2003 a batch of 41 Citadis 403 trams was ordered from Alstom, deliveries starting in 2005, the 45.06 m long vehicles with fleet numbers 2001 to 2041 having a similar appearance to the Eurotrams.

With a view to future network extension projects, in 2014 CTS signed a framework agreement with Alstom for 50 more Citadis trams. The initial order was for 12 trams, worth 41 million EUR, which were put into commercial service on 29 April 2017, carrying the fleet numbers 3001 to 3012. Since they were intended for the new line to Kehl, they had to meet design requirements for trams in both France and Germany. They are also the first Citadis trams to be designed to meet the BOStrab German federal regulations applying to trams, and have thus paved the way for Alstom to design and build trams for operators in Germany in the future. BOStrab authorisation is now valid for all Strasbourg’s Citadises.

These latest Strasbourg Citadises are 45.5 m long, rated at 720 kW, and have a top speed of 70 km/h (maximum line in tunnels is 60 km/h and elsewhere 50 km/h). They each have 60 seats and space for up to 228 standees, are fitted with LED lighting and full-length glazed entrance doors. They meet the regulations concerning handicapped rail travellers in both Germany and France, and are thus fitted with easily accessible door open buttons, wide seats, a multipurpose area with wheelchair harness points, and storage areas for prams. A new passenger information system with 38-inch TFT screens is installed.

Construction took place at Alstom’s Aytré works, near La Rochelle, with the traction motors coming from the Ornans works, the bogies and suspension from Le Creusot, the other traction equipment from Tarbes, and other electronic components from Villeurbanne. Saint-Ouen was responsible for design, while Alstom’s Salzgitter factory supplied the end bogies situated under the cabs. These trams were used mainly on the extension of Line A to the centre of Illkirch-Graffenstaden, inaugurated on 23 April 2016, and also on the then completed extension of Line D to Kehl.

The second option in the framework contract was taken up on 3 February 2017, and was for ten more Citadises, worth 28 million EUR.

Several years of debate and public consultation preceded the final decision to extend Line D from Strasbourg to Kehl. The first studies started 2008 - 2009, and in November 2009 Strasbourg and Kehl municipalities signed a MoU outlining how the project was to be co-financed. The co-financing agreement itself was signed on 15 March 2012, this also covering issues involving how the project was to be realised and how the future line was to be operated. The project was costed at 90 million EUR, the stretch of line on the French side (left bank) of the Rhein at 67 million EUR and the German section 23 million EUR.

The construction of Line D on the left bank of the Rhein started in the late 1990s, with the section between Rotonde and Étoile Polygone being inaugurated on 31 August 1998, most of this route being shared with Line A. The extension from Étoile Polygone to Aristide Briand in the suburb of Neudorf Est, shared in part with Line C, was inaugurated on 25 August 2007, while in the opposite direction, to the west of Strasbourg city centre, the stretch from Rotonde to Poteries was inaugurated on 30 November 2013, this shared with Line A as far as Dante. Construction of the 2.7 km of international tramway, linking Aristide Briand, Port du Rhin and Kehl-Bahnhof (railway station), started on 24 February 2014.

The main civil engineering project involved two new bridges spanning the Rhein and the Vauban basin. The possibility of converting the Pont de l’Europe road bridge over the Rhein for tramway use was regarded as too difficult, and it would only have been possible to lay a single track. Therefore a new bridge over the Rhein, the Pont Beatus-Rhenanus, 290 m long and 16 m wide, was built by the Bouygues consortium, while Alstom’s infrastructure teams were involved in the design and installation of the overhead wire (750 V DC) and of the tracks on this bridge and the adjacent Pont Citadelle, which has a single span of 163 m long and is 20 m wide, over the Vauban basin. In addition to the double track tramway, there is also a broad cycleway and footpath.

There are two bridges under the railway tracks serving the port area at Kehl and under the railway from Strasbourg-Ville to Port du Rhin, and immediately to the east of these, just beyond the stop serving Port du Rhin, there is a short stretch of artificial tunnel to the south of the residential estate served by this stop. Two more stops were planned on the French bank of the Rhein, at Citadelle and Starcoop, either side of the Pont Citadelle.

On 24 and 25 September 2016 the general public was invited to walk over the route of the new tramway, test running starting on the left bank of the Rhein on 10 January 2017, and the first tram crossing the two new bridges over the Rhein and the Vauban basin on 3 February. The formal inauguration took place on 28 April 2017.

The new tramway at that time terminated at Kehl-Bahnhof, thus restoring the situation which existed in the early 1940s. As then, there was a project for a further 1.2 km extension east and south to a terminus adjacent to Kehl-Rathaus, with an intermediate stop serving Hochschule. Services on the extension of Line D to Kehl ran at eight-minute headways in peaks and at 12-minute headways in off-peak periods. At Kehl station the existing Park/Ride car park has been enlarged. Compared with the international urban bus service which the trams replaced, the journey by rail between Kehl-Bahnhof and the Place de l’Homme de Fer or the main SNCF station in Strasbourg takes 12 minutes less - around 25 minutes.

The whole project to restore the tramway link between Kehl and Strasbourg forms part of Strasbourg’s Schéma des transports collectifs 2010 - 2025, covering the development of public transport in the urban area for this 15-year period. Urban development, involving industrial and logistics complexes, is planned in the area served by the line between Aristide Briand and the Rhein, and this will serve as a traffic generator. The new tramway also opens up new public transport possibilities for the residents of Kehl. In general international communications within the area defined as the Strasbourg-Ortenau Eurodistrict will be enhanced, with a greater incentive for people to switch from private cars to public transport, thus reducing noise levels and improving air quality.

Now, the 17 new additional Citadises will reinforce the existing services, including these on line D, which serves the Kehl city centre. A map of the Strasbourg tramway network. Line D is shown in dark green running from west to east.  Source: CTS