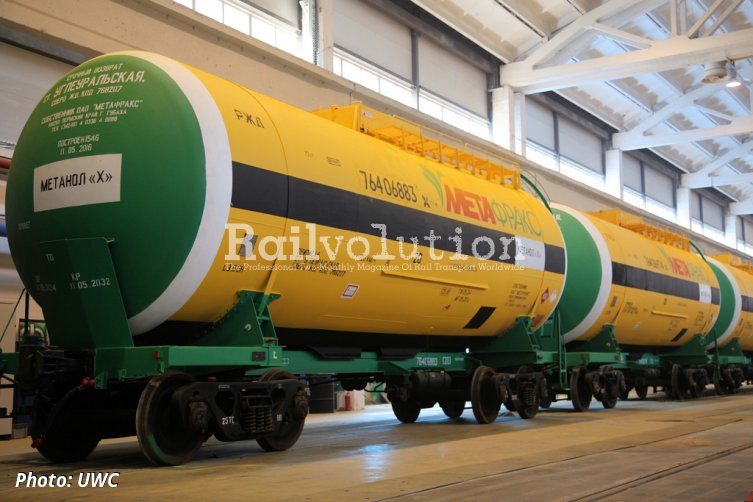 United Wagon Company (UWC, OVK) will deliver 100 new generation Model 15-6880 tank wagons to Metafrax, a leading Russian producer of methanol, by May 2019. This is not the first time that Metafrax has acquired these wagons, it already has more than 400 of such tank cars in its fleet. The Model 15-6880 wagons have bogies with a 25 t axle-load and an enhanced loading capacity of 73 t together with a tank volume of 88 m3.

These features allow for up to 2 tons of additional load per car compared to that of most tank wagons currently used on Russia’s network while keeping the length of the tank within standard limits, which makes methanol transportation more efficient. A train of 80 Modell 15-6880 wagons can carry 160 tons more of freight than a train formed of non-UWC cars, which reduces both the size of the fleet required for transportation and the cost of terminal operations.

Igor Chukreyev, Head of the Metafrax Transportation Directorate, said: „The business development strategy of our company targets major production and sales increases by 2030. Our investment budget specifically includes the cost of transport infrastructure improvement and phased renewal of the railway fleet. Metafrax chooses methanol tank cars made by UWC owing to their high-level performance.“