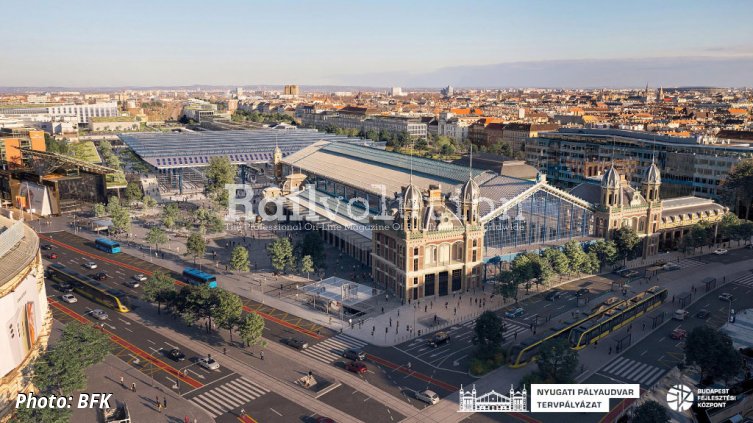 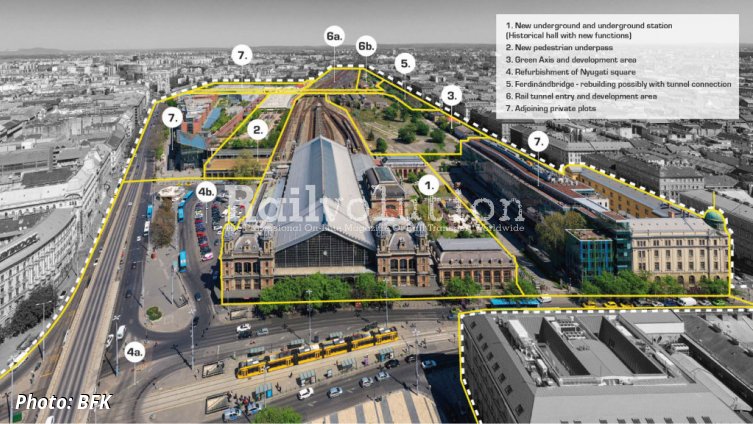 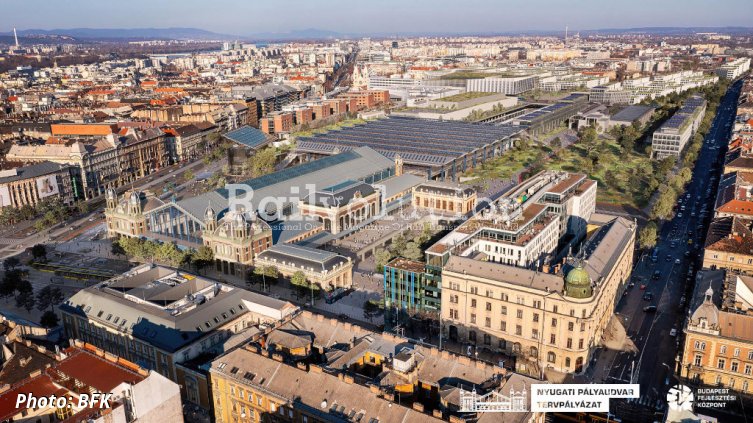 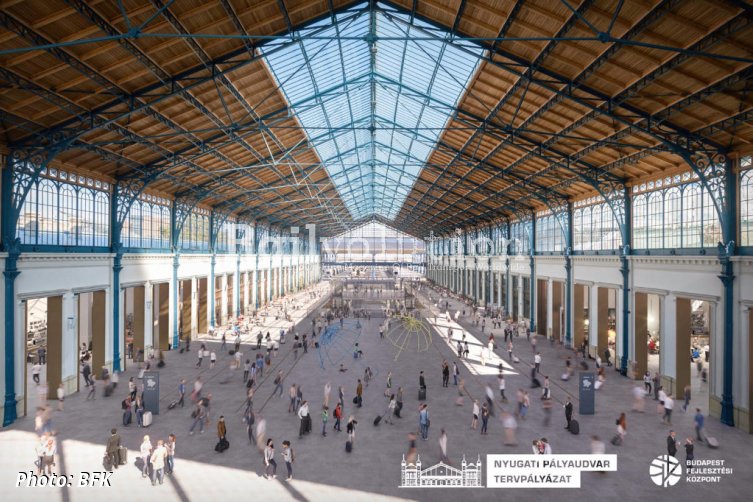 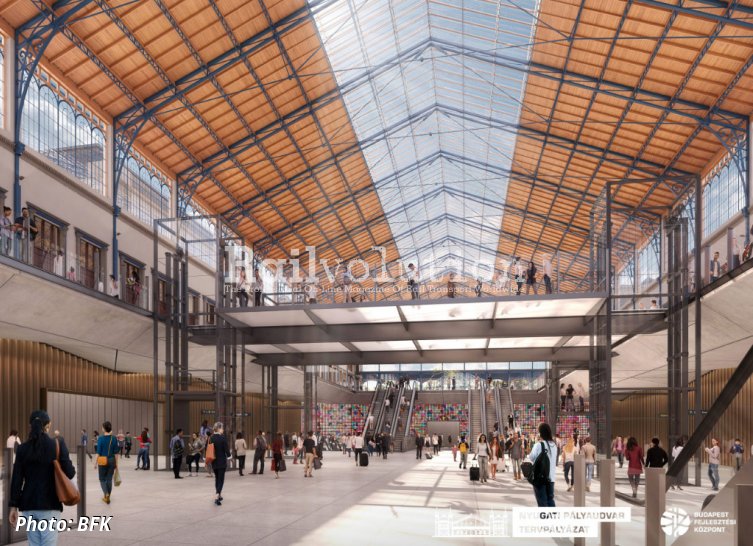 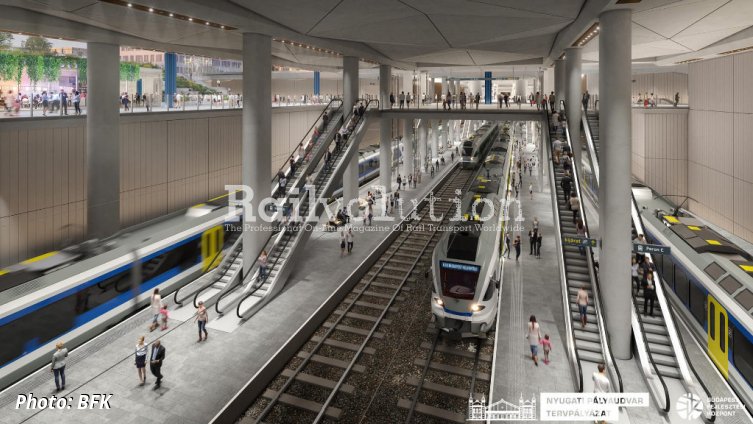 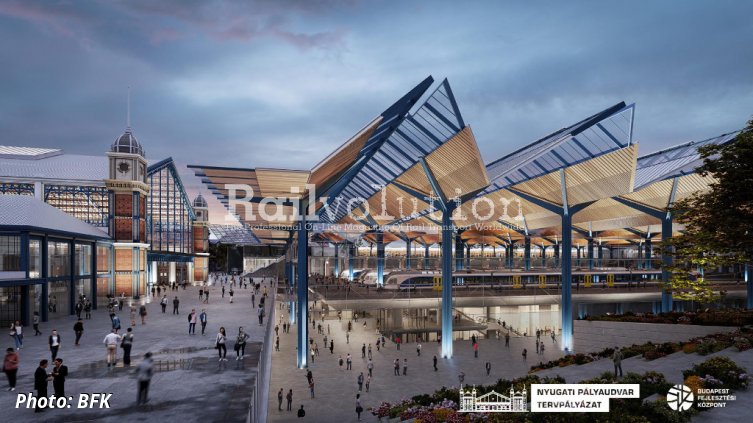 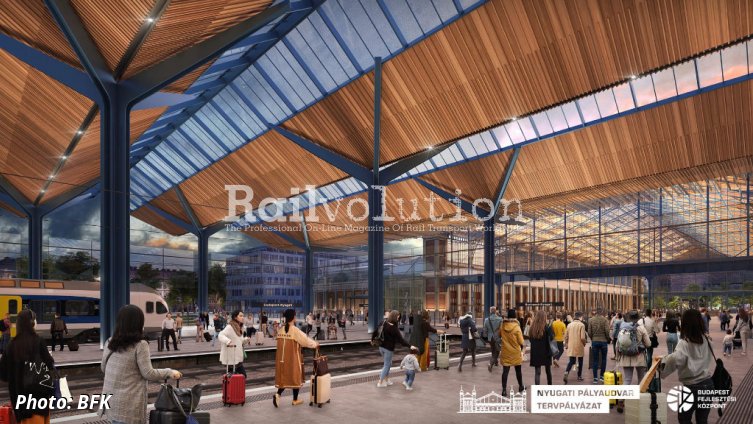 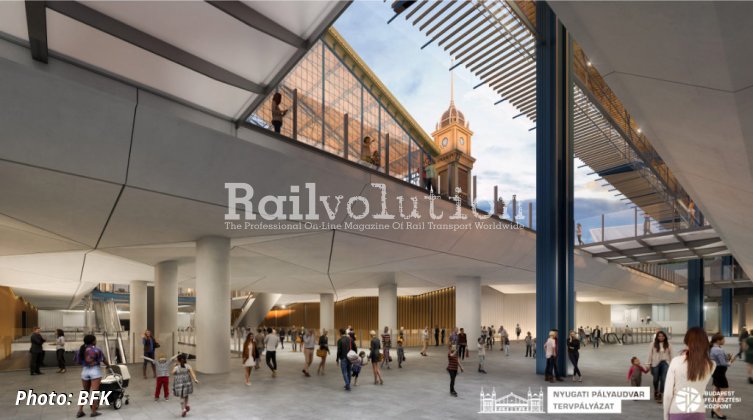 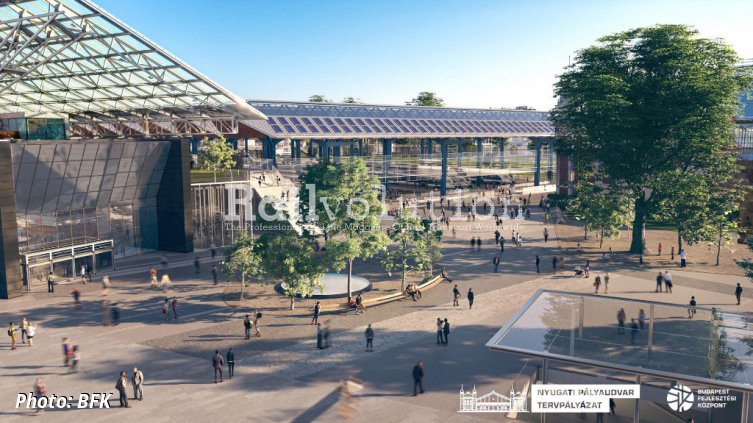 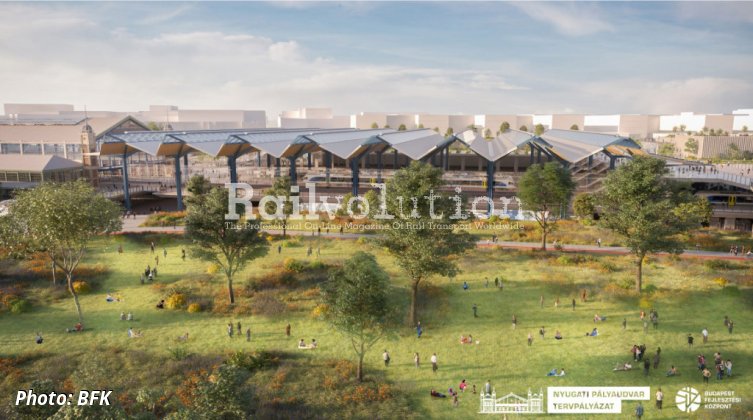 Based on the decision of the Evaluation Committee of the international architectural design contest on 29 March 2022, a team led by international architects Grimshaw will design the new Nyugati (western) station and its surroundings. Two entries were awarded second prize in the contest launched by the Budapest Development Agency last October: the firm of Austrian architect Albert Wimmer and AREP Architects from France. The consortium of Zaha Hadid Architects and Finta and Partners Architects won third place and the Evaluation Committee have also offered to purchase the entry of the Japanese-Hungarian duo of Kengo Kuma & Associates + M-Teampannon.

Based on the Budapest Suburban Railway Strategy approved by the Hungarian Government, the Budapest Development Agency (BFK) launched the architectural design contest for the Nyugati station in October 2021. BFK expected the bidding architecture companies to do a complex task, designing modern, worthy urban spaces and lots of green areas, but the Evaluation Committee has never for a moment forgotten what Nyugati really is: a railway station and a metro station, therefore the bidders primarily had to present a design proposal for a modern transport hub for passengers. And, amongst other things, this is why the winning bid came out as the strongest one, promising not only a beautiful, but also a usable station that can definitely be built and easily operated in the future.

The winner is the team led by international architects Grimshaw with team members Nautes Architects from Budapest, global engineering firm WSP, landscape architects Vogt from Zurich, and global project management company Turner & Townsend. The winning design provides an exemplary solution to the relationship between the two halls: the new one does not want to outgrow the old one, appears as a separate mass, and the details evoke the Eiffel building.

Of all the applicants, Grimshaw was one of the most experienced station designers. Grimshaw was founded in London in 1980 and has now grown to have seven offices worldwide (London, Los Angeles, New York, Paris, Dubai, Melbourne and Sydney). Thanks to the company, London Bridge Station was redesigned to accommodate 90 million passengers per year and has since won numerous architectural awards.

Grimshaw is also involved in designing the line-wide architecture for the soon-to-open Elizabeth Line in London,  and the new terminus for the UK’s HS2 project currently under construction. The design of the Biljmer ArenA railway station in Amsterdam, which welcomes 60,000 passengers a day, is also credited to the company. In Australia they also designed Melbourne’s Southern Cross railway station and design all 19 stops for Sydney’s Central Business District and South East Light Rail scheme. The renewal of the Fulton Center subway transit hub in New York is also one of the firm’s notable projects.

The Hungarian company Nautes Architects is involved not only in the renovation of old buildings (Aquincum Museum, the building of the new Hungarian Museum of Transport in the diesel hall of the former Northern vehicle maintenance Depot) but also in transport planning, for example, when designing the future Közvágóhíd station of the Southern railway ring in Budapest, and right underneath it, the new stations of the Ráckeve and Csepel suburban railway lines, commissioned by BFK.

As Balázs Fürjes, Chair of the Evaluation Committee said during the announcement ceremony held in Budapest: “The Nyugati station’s original designer, the famous Eiffel office was selected in an international competition back in the 19th century, the first of its kind in Hungary. Now, in the 21st century we are opening a new historic chapter in the life of Nyugati with the selection of the world class future designer of the extended station. Nyugati will be more than just a transport hub with many railway lines and two metro stations but a meeting point and an urban community space. Railways are the gold reserve of urban transport which we need to exploit.”

“There are now 18 million people using Nyugati on an annual basis. Our goal is to double that figure by 2040. We will build the largest railway hub not just in Budapest but throughout the country as the crown jewel of our long-term strategy. The hub’s architecture, design, urban environment, and functionality all need to reflect the key role of Nyugati plays in the future while paying tribute to the historic Eiffel Hall.” - added Dávid Vitézy, Co-chair of the Evaluation Committee, CEO of the Budapest Development Agency responsible for regional railway developments in the Budapest metropolitan area.

Hal Behind The Hall

The protected historical building of the Eiffel hall, which has recently been renovated as part of a government investment project, will remain unchanged, but there will be no tracks on the ground floor of the hall itself, only underneath it, as the ultimate goal is that the building would serve as the entrance to the planned railway tunnel from the Nyugati station via Széll Kálmán tér to Kelenföld station.

Under the hall there is enough space for four tracks - this will be a section designated for suburban trains. Behind them, in a wider space but still under ground, will be another section of the station for long-distance trains. Partly above this, meaning also behind the hall, thirteen tracks will remain on the surface. One of the requirements of the design contest was that these 13 tracks should also be covered by a hall because passengers also need to be protected from rain, snow and sunshine, and the station should look like a station in the cityscape, not merely as a set of tracks.

For each bidder, this new hall was where they could best show their design skills, making it the centrepiece of the architectural designs, as neither of the applicants wanted to change the basic outlook of the listed hall, which, by the way, was not even allowed in the contest.

The winning design provides an exemplary solution to the relationship between the two halls: the new one does not want to outgrow the old one, but at the same time, with its clearly separate mass, the independence of the new hall is also highlighted, while its colours and materials and the angle of its roof evoke the Eiffel building. It is a rare, interesting and innovative solution that the roof ridges of the new hall are not parallel to the tracks, but perpendicular to them.

The World Of Pedestrians

The main reason why the Evaluation Committee awarded first place to the UK team was that their entry was assessed to be the best in creating a well-functioning station from a practical point of view. Pedestrian movements throughout the whole area have been well-considered.

The plan is that Nyugati will become Hungary’s main railway station - it is the busiest station already, but many more trains will stop here, and trains will come from a significantly higher number of Hungarian cities in the future, as the capacity of the station will be increased. 300,000 passengers will pass through here every day, but the area serves not only them, but pedestrians also.

The design of the underpasses, the underground spaces, also excels in not forgetting that Nyugati is an important transit point to the existing metro line 3 and the future line 5. Using cut-outs to let in natural light and air proved to be a great idea, and they also play a part in providing a safety boundary for the railway area.

However, the surface is also important, with the cross axis between Váci út and Podmaniczky utca running as a pedestrian walkway in front of the end of the surface station tracks, thus directly connecting the station to the park along Podmaniczky utca and to Nyugati tér, essentially along the line of the main entrance to the Westend City Centre shopping mall. Passenger service facilities, shops and rentals are optimally located in the main direction of passenger flow.

The roof covers all the platforms, and behind it a new transverse pedestrian walkway is opened from the Millennium Courtyard of the Westend City Centre, more precisely the central courtyard of the shopping centre where most of the escalators and lifts can be found. This will provide easy access from Újlipótváros (District XIII) to the railway station via Westend City Centre, or to the new park planned along Podmaniczky utca and to Terézváros (District VI), by crossing the tracks on the roof line.

While showing respect, the UK team was also brave enough to make some changes to the Eiffel building, proposing to open up its sides, so that the hall can be easily accessible from three directions, making it an ideal station lobby with good access to both the surface and underground platforms.

People walking along the Grand Boulevard will essentially be able to take a short detour through the Eiffel hall, spend some time in the beautiful historic building which will retain its function as a station, as there will be four tracks underneath, accessible from the hall by lifts and escalators.

Another great idea that is worth mentioning is the solution applied to the road traffic on Lehel Square to create a space for pedestrians and trams. It should be noted that BFK’s design contest has been built on the long-time plan of removing the Váci út overpass, which will create the possibility to connect the tram lines ending at Lehel Square and Deák Square. The humanisation of Nyugati Square and the demolition of the overpass were also supported by the Evaluation Committee.