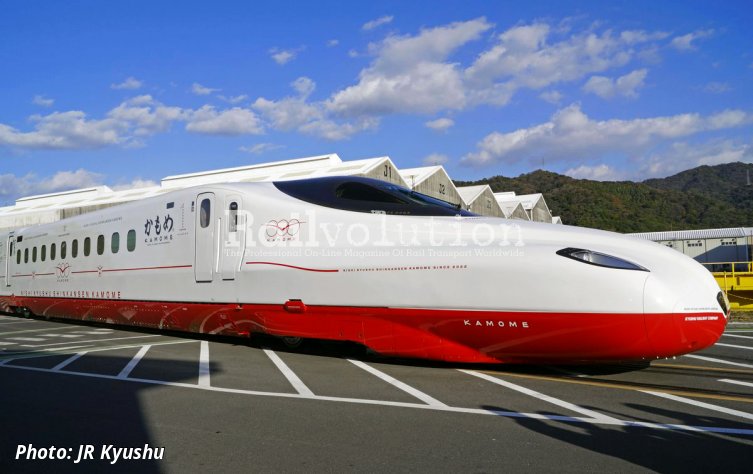 On 22 December 2021, at the Hitachi Kasado works, JR Kyushu unveiled its new Class N700S Shinkansen train destined for new West Kyushu Shinkansen line to Nagasaki. The new six-car variant of Class N700S is destined for this new 67 km long line. The new train and the service itself was named Kamome ("seagull") which is traditional in the region - it has been used for about 60 years for the express services between Hakata and Nagasaki.

The six-car Class N700S unit is derived from 16-car Class N700S EMUs purchased by JR Central and JR West, which are in commercial service since July 2020 and of which there is 19 units in service on Tokaido and Sanyo Shinkansen lines to date, gradually replacing the Class 700 and N700A Shinkansens. The Kamome’s red livery and interior was created by Seiji Mitooka, designing also other trains of JR Kyushu.

The new West Kyushu Shinkansen line from Nagasaki to Takeo Onsen, whose construction is now almost completed, is scheduled to open in autumn 2022, and for coming years it will be isolated from the rest of high speed network. Between Hakata and Takeo Onsen there will be Relay Kamome service enabling transfer from or to the Shinkansen Kamome.