New Rail Shuttle Between The Göteborg Port And Rosersberg 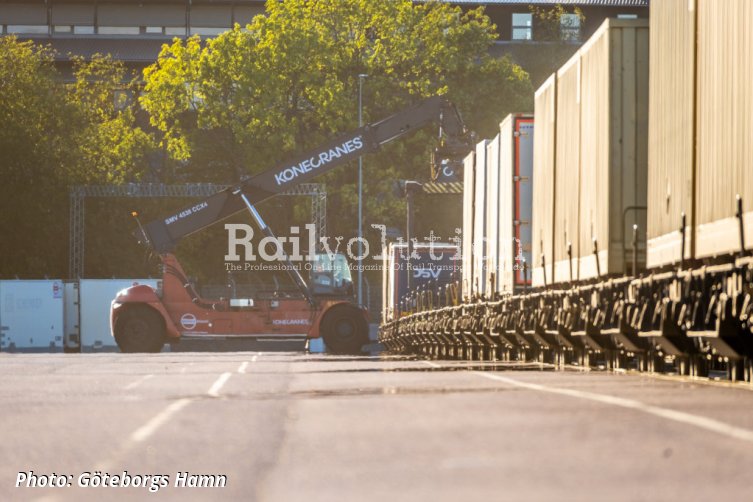 2021 ended on an all-time high for rail traffic at the Göteborg Port and in 2022 the goal is to grow further. In January, Green Cargo introduced a new freight shuttle between the Göteborg Port and Rosersberg, north of Stockholm, which strengthens the conditions for further growth. Departing six times a week, the shuttle transports paper products and other goods from Rosersberg to theGöteborg Port, for onward transit to France and the United Kingdom.

“Rosersberg is an expanding region, particularly in the logistics sector. The establishment of a rapid, efficient, climate-smart link to the world using the full Göteborg Port service offering is extremely positive,” said Antti Laakso, Senior Logistics Development Manager at the Göteborg Port Authority. The shuttle began operating in January and can carry 40 trailers or more than 80 TEUs. The aim is to double the volume with two trains per day.

The prime movers behind the shuttle are DFDS and Green Cargo. In Göteborg, goods are handled at the Arken Intermodal Terminal, located directly beside the ro-ro and container terminals, where they are then loaded and discharged for onward shipment to and from transocean and European markets. The bulk of the freight transported by shuttle consists of paper products, destined mainly for the United Kingdom and France. On arrival in Göteborg from Rosersberg, the freight is loaded onto DFDS vessels and shipped to the UK via Immingham, and to France via the Belgian port of Zeebrugge.

The combi terminal in Rosersberg is owned by the logistics company Train Alliance and has two fixed terminal cranes serving four 750 m parallel tracks. The 90,000 m2 terminal has a further 60,000 m2 to facilitate future expansion. The aim in time is that all truck distribution to and from the terminal in Rosersberg will become fossil-free following the introduction of electric trucks. Construction of charging stations linked to the terminal will commence in August.