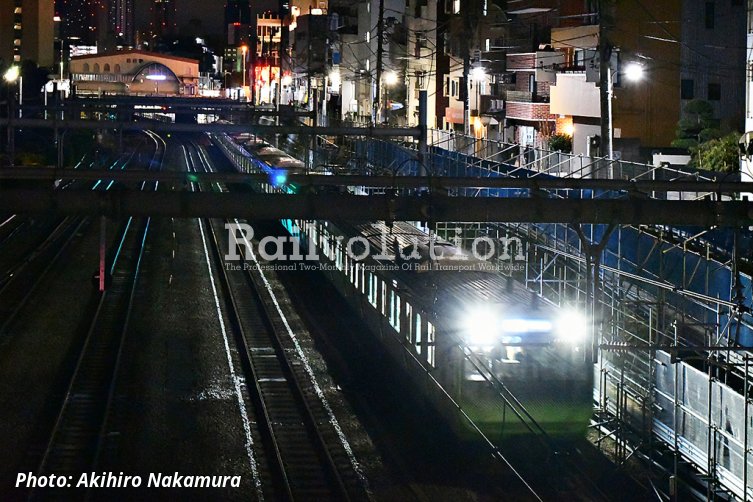 JR East's Yamanote line is the busiest suburban heavy rail line in Tokyo. It connects not only the capital's main urban areas, but also most of the city's main railway stations. It is a 34.5 km circular route, with 29 stations. Services, running at 2-minute headways in peak hours, are provided by 11-car EMUs, the round trip taking between 59 and 65 minutes. In the past all stations were fitted with platform gates. The line also has only one level crossing, and so might be regarded as an ideal candidate for the introduction of driverless train operation.

During the nights of 29/30 and 30/31 December 2018, in the period when there are no regular trains running, as part of its project to introduce driverless train operation on the Yamanote and Tōhoku Shinkansen lines, JR East undertook the first trial runs of regular automatic train operation (ATO). Further test runs were scheduled for the nights of 4/5 and 5/6 January 2019.

The test runs were made using a Class E235 EMU, the first of which were introduced on the Yamanote Line in spring 2015, to replace the older Class E231 EMUs, which date from just after the turn of the millennium. During the tests runs a JR East staff member occupied the cab of the train, to monitor its performance. On the Yamanote line a communication-based ATC system with dynamically generated braking curves, known as D-ATC (Digital ATC), designed for use on conventional railways, has been active since 2005, and lineside signalling has been taken out of use. For evaluation purposes the cab was also fitted with a „Head-Up Display“ (HUD), which enables the driver to see through to the line ahead. This is similar to the HUDs fitted on many military and civilian aircraft nowadays, and which can also be fitted to road vehicles.