Tram-Train Between Szeged And Hódmezővásárhely 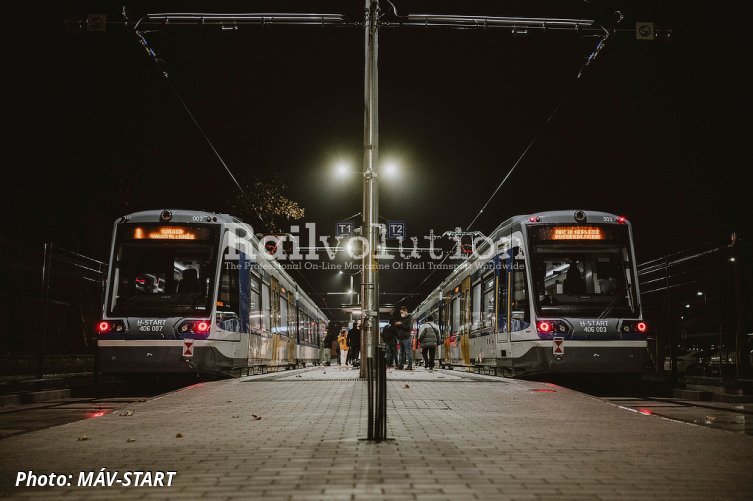 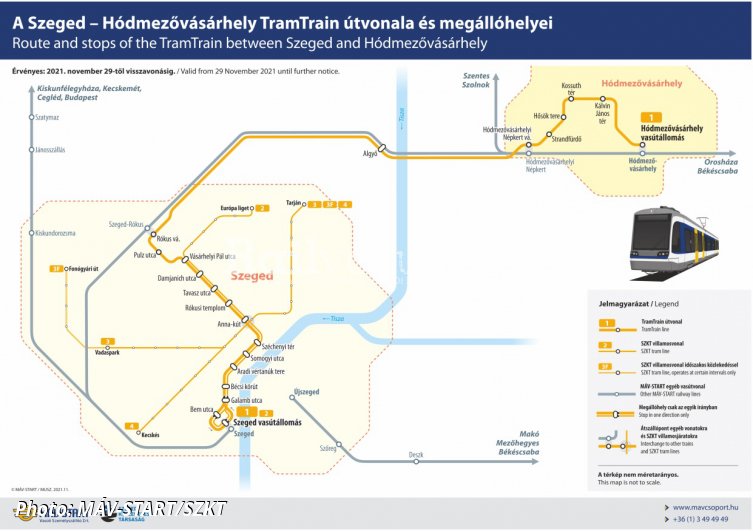 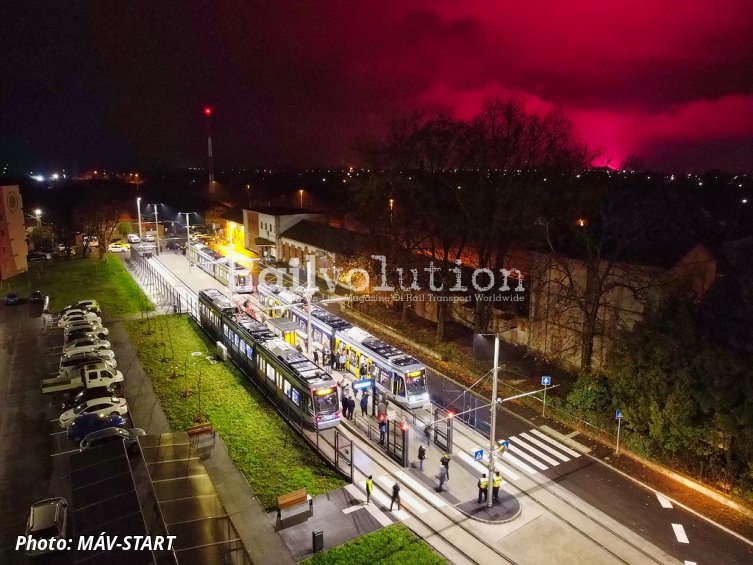 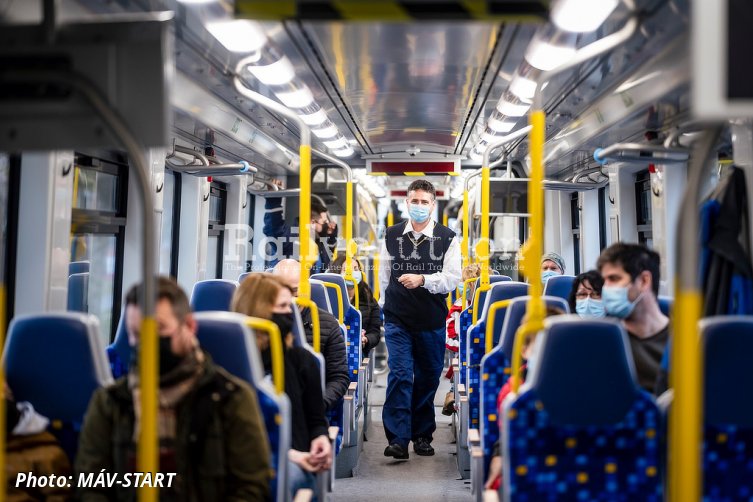 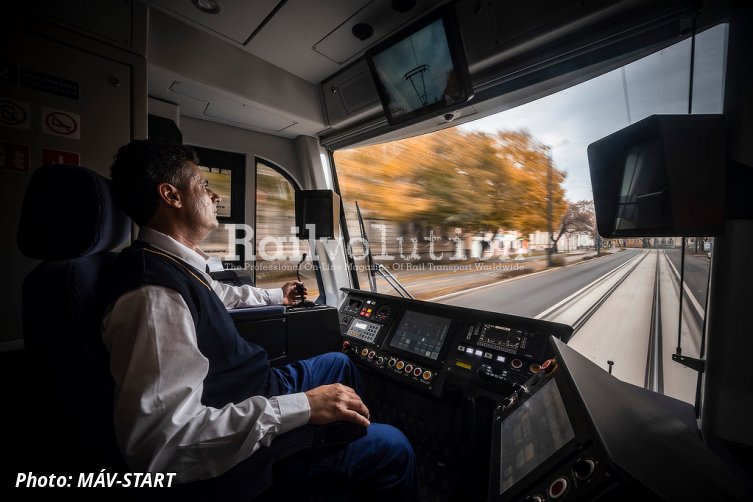 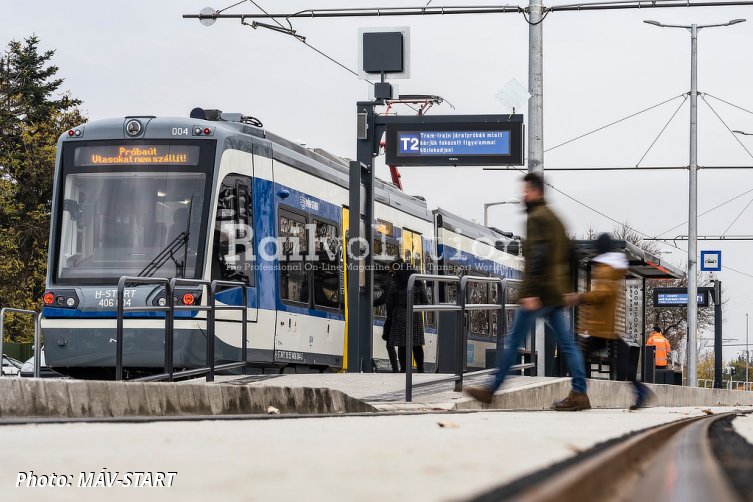 In Hódmezővásárhely, northeast of Szeged, the tram infrastructure is newly built, making it the first time in 108 years that a new tramway line has been opened in Hungary (in the past, the trend was to close down tram operations ...), even though it is only a single-track line of about 3.5 km. It is also the first tram-train operation in Eastern Europe and aims to attract more people to use public transport.

Indeed, there is a large number of people moving between Szeged (about 160,000 inhabitants, the third largest city in Hungary) and Hódmezővásárhely (about 45,000 inhabitants) on weekdays, and public transport to and from Szeged was represented by buses and trains so far. The distance between the two bus stations is about 26 km and the journey is scheduled to take between 30 and 37 minutes (depending on the number of stops), but due to traffic jams on the roads most buses are delayed. Diesel powered trains of MÁV-START also run between the two cities, but they have a low frequency (approximately hourly) and a maximum speed of 80 km/h.

Therefore, in 2007, a plan was drawn up to create a more efficient transport system - a train-tram - involving MÁV-START and SZKT (Szegedi Közlekedési Tár-saság; Közlekedési = transport, Társaság = company). In 2016, the construction permit was issued, and the work started on 4 April 2018. First passengers were able to start using the new ype of transport at the end of this November. The distance between the centres of the two cities on the route described is 31.6 km, which the tram-trains now cover in 40 minutes, and the entire route in 51 minutes, with a further 9-minute reduction in travel time following planned further modifications to the line.

To operate this system, MÁV-START signed a contract with Stadler in May 2017 for eight Citylink dual-power tram-trains, with an option for four more, which was confirmed in July 2020. The cars of the new Class 406 are manufactured at the València plant, from where the first one was dispatched (on a road-trailer) in early January 2021, which it arrived at the depot in Szentes, located north of Hódmezővásárhely, on 8 January.

The Class 406 Citylinks are three-car bi-directional low-floor vehicles with a 1,435 mm track gauge, a 100 km/h maximum design speed and a Bo' 2' 2' Bo' axle arrangement, which can run on the tram lines in Szeged and Hódmezővásárhely at 600 V DC with overhead power supply and on the non-electrified railway line connecting the two cities in diesel mode. In the electric mode, they have a maximum power of 4 x 145 kW and in the diesel mode, these trains are powered by two 390 kW Power Packs, mounted on the roof of the end cars. The maximum speed is 50 km/h in tram operation and 80 km/h in rail operation. The wheels have a diameter of 720 mm when new (640 mm when worn) and a minimum curve radius of 22 m.

Vehicle weight is 71 t, length 37,200 mm, maximum width 2,650 mm and a height of 3,800 mm above TOR. There are four double-leaf entrance doors  on each sidewall, with automatic sliding steps, the boarding height is 300 mm and 550 mm above TOR. The Citylinks are air-conditioned and equipped with CCTV and WiFi, have 92 seats (16 of which are folding) and space for up to 216 standing passengers (4 persons per m²) and also offer two multi-purpose areas that can accommodate two wheelchairs or four prams.

The new transport system was due to be launched in summer 2021, but tests in spring showed that the tram network in Szeged could not cope with the increased energy load. The explanation given was that the investor considered the existing infrastructure of the SZKT to be adequate during the design of the tramway, so he did not examine the maximum load capacity of the traction system. Therefore, a proposal to upgrade the power supply was prepared just two months before the planned start of operation, for which the city had to find a contractor, of course with the risk that the project might be delayed.

This is what happened, and after the works were awarded, for which MÁV provided SZKT with a non-repayable grant of 70 million. HUF (around 200,000 EUR), it was planned to complete the work by 31 September. In the end, however, the modifications were managed earlier and the test operation with passengers started at the end of November.

In the meantime, deliveries of tram-trains were under way, with five Citylinks arriving in Hungary from València by the summer, which enabled the test operation without passengers to start on 30 August. In Hungarian, it is called tartampróba ("endurance test") and the trains had to travel a total of 50,000 km, running empty and then with a simulated load. At the end of October, the seventh Citylink was delivered and the last vehicle of the first batch arrived on 9 December. The remaining four Citylinks (the optional units) are due to be delivered by summer 2022.

The first tram-trains started test passenger service in early morningof 29 November, at 03.31 from Hódmezővásárhely and at 04.38 from Szeged. They will run once an hour in each direction until 31 December 2021, until almost midnight. Between 1 January and 15 March 2022, the interval is already to be shortened to 20 minutes in peak periods and 30 minutes out of peak periods. Thereafter, from April onwards, it is planned to shorten the frequency to every 10 minutes, and night service on Thursdays, Fridays and Saturdays is also planned. Passengers will be able to use the trams free of charge until 15 April 2022.

At present, there are three Citylinks in operation, which are sufficient to cover the current timetable, and one is kept as a reserve. Stadler is currently working on the other four units in connection with the remaining tasks required to complete the homologation process. Type approval from the NKH railway authority can only be issued after the completion of the test passenger service.

Many problems had to be overcome in the construction of the new system itself, because no one in Hungary had practical experience with the tram-train yet, and generally the tram operators are not familiar with the problems of the "big" railways and vice versa. For example, combining the MÁV regulations with the regulations of two urban tram sections was a challenging task. That is why, among other things, traffic lights with the basic signal "Stop" were installed at the junction of the railway and tramway lines. The transition between the railway and tramway sections is semi-automatic, where at the points of contact a light in the cab signals the driver to press the button to start or stop the internal combustion engines and to lower or raise the pantograph.

The project also involved the reconstruction of the Szeged-Rókus - Hódmezővásárhelyi Népkert section of the railway line to make it suitable for trams, which included, among other things, partial double-tracking (two double-track sections were built for a total length of approximately 8 km) and the construction of a 1.5 km-long link from the existing Szeged-Rókus tram terminus to the railway line. Naturally, the Citylink’s wheelsets have a special wheel surface profile so that the tram-trains can be operated safely on both the railway and tram lines.

In addition, it should be mentioned that various political interests also played a rather important role here, as both cities are in the hands of the Hungarian opposition, so that even the smallest problem in the project was immediately exploited to attack the government. Nevertheless, the fact is that the total cost has increased considerably, mainly due to the reconstruction of the railway line, as the original calculation was 16 billion HUF, but in the end the whole project cost about 80 billion HUF (around 216 million EUR).

This amount includes 12 Citylinks, track modifications and the establishment of a new depot with a 2,876 m2 hall and 1,562 m of track at Szeged-Rendező pu (the marshalling yard), the latter together with tram-trains and the railway line being co-financed by the EU.