A Visit To Stadler Siedlce (2) 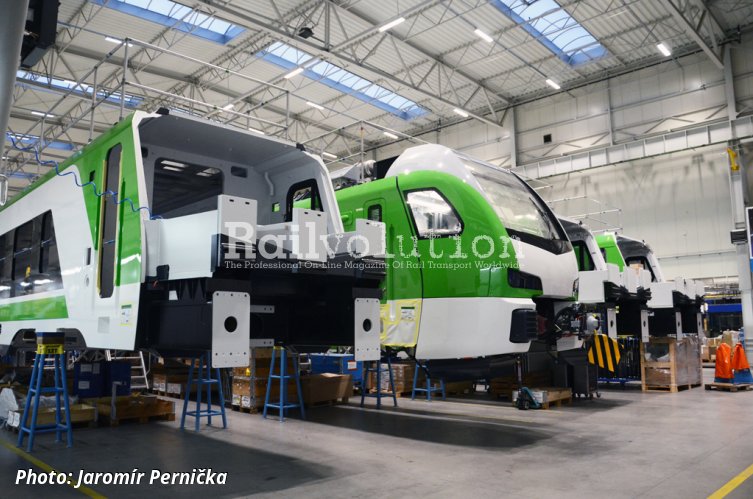 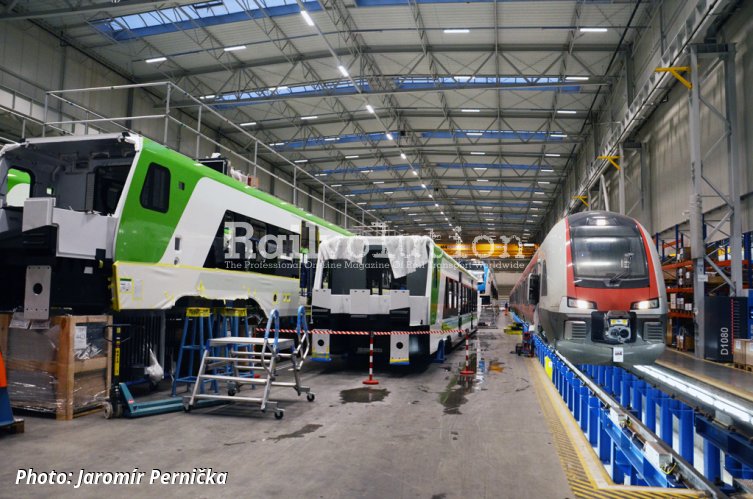 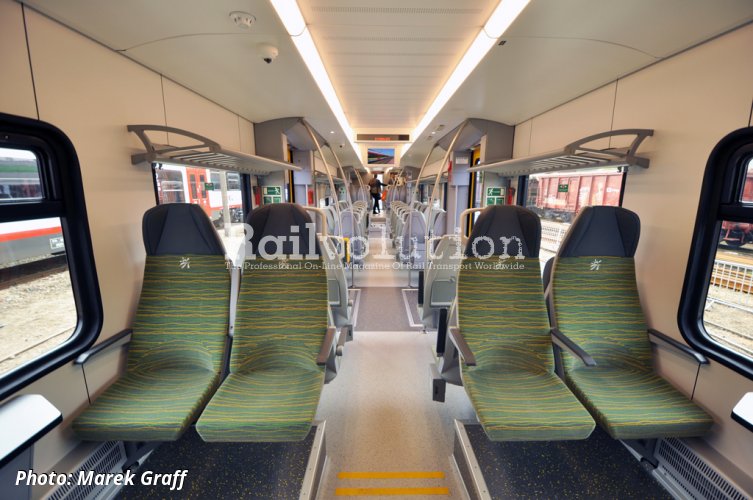 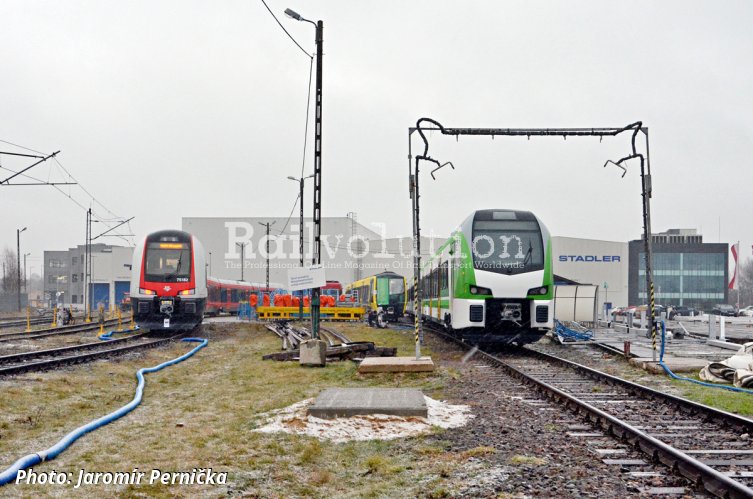 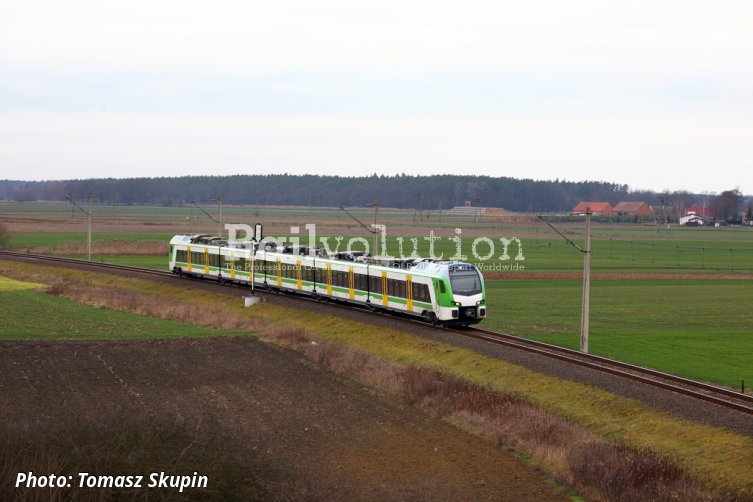 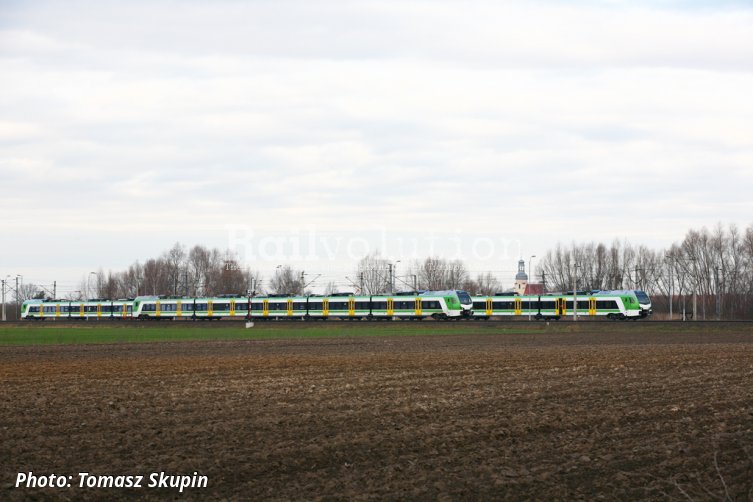 One of the contracts now realised at Siedlce is the batch of FLIRT EMUs for Warszawa-based Koleje Mazowieckie (KM). On account of its magnitude, the KM order has resulted in the Siedlce works being mostly engaged at present in building trains for Polish clients. This is the first time since 2007 - 08 that this has happened, when following contracts awarded in June 2006 Stadler built there ten four-car FLIRTs for KM and four four-car FLIRTs for Województwo Śłąskie, these initially operated by Przewozy Regionalne (PR), but in 2011 transferred to the ownership of province-owned Koleje Śłąskie (KŚ).

The Siedlce works was inaugurated in September 2007. In 2012 came an order from ŁKA (Łódzka Kolej Aglomeracyjna) for 20 two-car FLIRT 3 EMUs, followed in 2013 by one from PKP Intercity for 20 eight-car FLIRT 3s, this project undertaken in consortium with Newag. The latest KM order will more than double the number of FLIRT EMUs in service in Poland.

A batch of FLIRTs built for Koleje Mazowieckie represents the largest contract so far ever awarded in the recent history of Polish railways for the acquisition of a single type of train. On 17 January 2018 KM signed the framework contract, worth over 2.2 billion PLN (around 514 million EUR), with Stadler, for 71 FLIRT 3 EMUs, 61 five-car and ten two-car trains. The agreement makes provision for maintenance of the latest generation FLIRTs (at present, Stadler no more uses its initial FLIRT 3 designation) up to and including the P5 heavy overhaul level, which takes place when the trains have reached a maximum of 18 years of age.

Initially, the framework contract envisaged the first six five-car trains being delivered by the end of 2018, with the ten two-car trains following in 2019 and the remaining 55 five-car trains bet-ween 2019 and 2022. Now, it is envisaged that six batches of trains will be delivered, the scheduling of the delivery of each batch being covered by an individual agreement. So far, two contracts have been signed: the first one on 7 May 2018 for six five-car FLIRTs, and the second one on 28 May 2019, for 12 five-car FLIRTs.

Deliveries were expected to start in late 2019, with the first five-car trains of the first batch entering service between April and late 2020. But the start of deliveries is postponed for testing and certification reasons. In-factory testing began in October 2019, followed by test runs at the Źmigród test circuit starting in early November to enable a start to be made on authorisation testing for the UTK. These FLIRTs are envisaged for use on services between Warszawa and Działdowo, in the northwest of capital.

Deliveries of the second order are to run between the second and fourth quarter of 2020, when all 12 five-car FLIRTs should be in service. These trains will be used mainly on services in southern Mazowsze.

Once deliveries of all 71 FLIRTs are complete, KM will be able to withdraw all its remaining ageing Class EN57 EMUs. The result will be that passengers will experience a step-change in train service comfort, reliability and safety, while KM will also be able to increase service frequencies and even operate new routes.

The 160 km/h five-car 3 kV DC FLIRTs are 92.8 m long over couplings, have a Bo’ 2’ 2’ 2’ 2’ Bo’ axle arrangement, and are rated at 3,000 kW. While the driver’s cabs are designed for a driver and secondman, with two seats provided, the driving consoles are designed for one-man operation, with the driving seat and the console arranged around the centreline of the train. However, to comply with the Polish regulation a secondman will be present on these new trains when running at speeds over 130 km/h (if the train is not running under ETCS supervision), his duties being to sight the trackside signals and to activate the emergency brake.

These new FLIRTs meet the requirements of the latest TSI standards and the EN 15227 crash safety standards. Notably, the trains are being equipped with the Stadler/Mermec joint venture AngelStar’s GUARDIA on-board ETCS Level 2. This is the first commercial use in Poland of GUARDIA.

The passenger accommodation, as on other KM stock, reflects the operator’s green and white livery. There are seats for 269 passengers, mostly in a 2 + 2 configuration and in bays. The passenger accommodation, and cabs, are fitted with independent HVAC systems. Seats are fitted with power sockets and USB charging ports. CCTV, an emergency passenger-to-driver intercom and state-of-the-art passenger information systems are installed, and WiFi reception is possible.

The trains are barrier-free. Wheelchair boarding ramps are installed at one pair of entrance doors. An induction loop ensures that partially deaf passengers can hear all public address announcements. Spaces for wheelchairs, bikes and prams are provided. Train staff are provided with a separate office cubicle, this incorporating a monitoring screen showing CCTV footage from the passenger accommodation, and a microphone for making announcements.

On 11 July 2019 Stadler announced that it had been selected by PKP IC as preferred bidder for a batch of 12 EMUs. The agreement, signed in August 2019, includes maintenance of the trains over a 15-year period. PKP IC currently operates a fleet of 20 Class ED160 FLIRTs, which have been in service since December 2015. These two contracts bring the total domestic FLIRT EMU fleet size up to 137 trains.