A Visit To Stadler Siedlce (3) 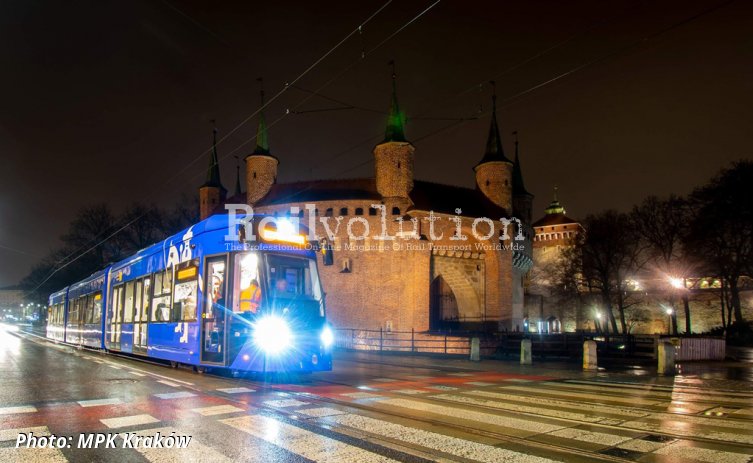 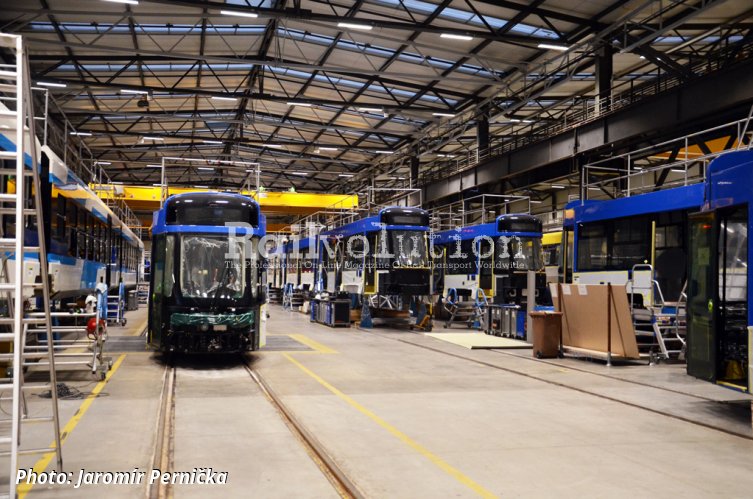 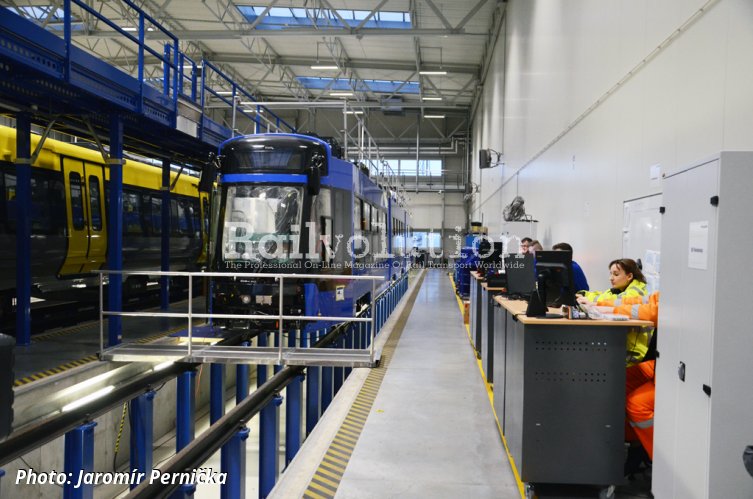 Stadler Siedlce is also building trams. At present a batch of 35 low floor TANGO Lajkonik trams from a contract awarded Stadler Polska by MPK Kraków are being built. This is a first batch from the framework agreement for up to 50 trams signed in January 2018 (with 15 trams from an option ordered on 12 December 2018). Deliveries are to run from March until the end of 2020, the first tram was sent to Kraków for testing on 13 December 2019.

Lajkonik is one of the unofficial symbols of the city of Kraków. It is represented as a bearded man resembling a Tatar in a characteristic pointed hat, dressed in Mongol attire, with a wooden horse around his waist. It is the subject of the Lajkonik festival held regularly in Kraków.

The 600 V DC three-section unidirectional trams (the manufacturer’s designation TANGO Kraków) have a Bo’2’2’Bo’ axle arrangement, a top service speed of 70 km/h, a continuous power of 420 kW and a maximum power rating of 675 kW. A starting tractive effort is 78.4 kN and a starting acceleration 1.1 m/s2. The trams are 33.4 m long, 2,400 mm wide and 3,600 mm high above rail top. The bogie wheelbase is 1,800 mm both for powered and non-powered bogies, while the wheels (powered and non-powered) have a diameter of 600 mm when new and 520 mm when worn.

The TANGO Lajkonik trams have bodyshells designed for logitudinal force of 400 kN and are designed with front end crash absorption structure to minimise damage in the event of a collision with road vehicles. The bodyshells are manufactured at Śróda Wielkopolska plant. The tram have seats for 82 passengers, plus one tip-up seat, and space for up to 139 standees at a density of five per m². They are equipped with HVAC, ticket vending and cancelling/dating machines. USB sockets are provided on sidewall panelling for the charging of mobile phones. The entrance doors are 1,400 mm wide and one of these are provided with a platform that can be lowered and raised to facilitate the boarding and alighting of wheelchair users.

As regards the financing of the trams, the same conditions are in place as for the original batch of 35. The net price per tram is 7,270,127 PLN (around 109 million PLN for the entire batch of 15). Co-finance was provided by the European Investment Bank, which together with other entities has granted the sum of 376 million PLN (about 87 million EUR) for various projects.

MPK Kraków is endeavouring to eradicate high floor trams from its fleet of vehicles used for regular services. Thus on 2 March 2020 the operator chosen the consortium of Stadler Polska and Stadler Śróda as the supplier of up to 60 new TANGO Lajkonik trams. The offer, which was received by MPK Kraków on 17 September 2019, passed the positive assessment, the consortium being the only bidder. Each trams costs 8,371,600 PLN (around 1,95 million EUR), including spare parts.

The frame contract will be for 60 trams in total, in the first stage 10 Type TANGO Lajkonik trams will be purchased. The final number of the new trams ordered will depend, among others, on the amount of EU funding. However, before the contract will be signed with the manufacturer, Stadler's offer will be sent to UZP (Urząd Zamówień Publicznych, the Public Procurement Office) of Warszawa for the so-called prior checking.

Deliveries of the first 10 trams are envisaged to start in early 2022. Two trams will be fitted with the traction batteries enabling them to run around 3 km without use of the overhead line, while the remainder will be designed to be able to use this solution in the future. They will be probably of the similar design like that of the 50 three-section TANGO Lajkonik trams now being built at Siedlce.

If MPK Kraków will place an order for all 60 TANGO Lajkonik trams of the frame contract, it will increase the city’s fleet of modern trams by 110 vehicles, and in total it will have almost 300 trams with low floor (both new and modernised trams). They will form over 90 % of operator’s tram fleet.

On 19 November 2018 Stadler acquired the remaining 40 % of shares in Solaris Tram Sp. z. o. o., which was established as a joint venture between Solaris and Stadler on 1 January 2017. This is a logical development, since Solaris in July 2018 sold its bus and coach manufacturing activities to CAF, which was at that time only marginally involved in bus and coach manufacturing via its close neighbour and partner firm Sunsundegui, and which is essentially a competitor to Stadler within the rail market.

One result of the take-over is that Stadler has acquired another Polish factory, that owned by Solaris at Śróda Wielkopolska, near Poznań. This has around 250 employees, who were also building a batch of Tramino trams for Leipzig. Stadler intends to further develop the tram production business and invest in order to expand and modernise the factory.

The contract for the batch of 35 +15 TANGO Lajkonik trams ordered by MPK Kraków in 2018 was won by Solaris Tram, the new development meaning that they will be built solely by Stadler. Thus ended Solaris’s roughly ten-year venture into tram-building, which was perhaps a rather rougher ride than the company had originally envisaged. The brand name Tramino will live on, since Solaris has allowed Stadler to use it.