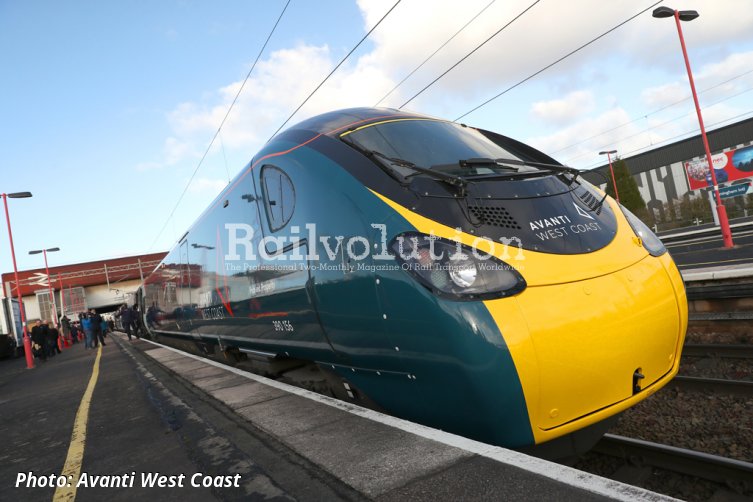 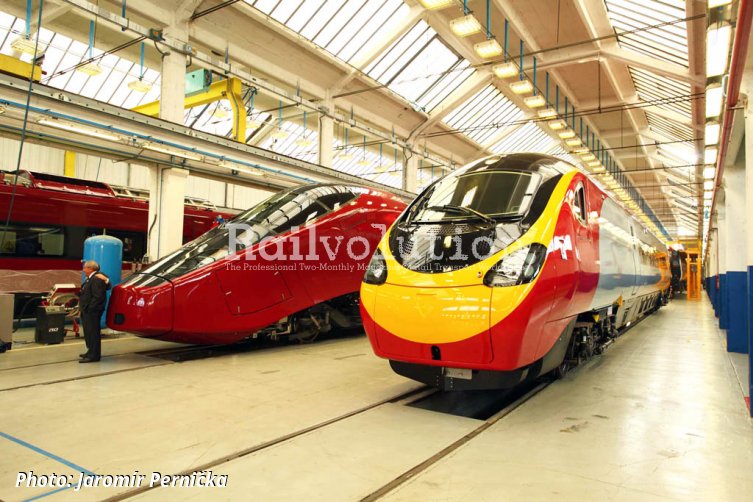 Britain’s most iconic train fleet is to undergo a major refurbishment. The first of the tilting Pendolinos entered service on the London to Glasgow route in January 2003. Now, all 56 units deployed on the West Coast Mainline will be overhauled in a seven-year deal worth approximately 755 million EUR signed between the route’s new operator, Avanti West Coast, and Alstom which built the fleet. Angel Trains leases the fleet to Avanti West Coast.

As well as covering a 150 million EUR upgrade programme of the Pendolinos, which is believed to be the biggest train upgrade programme ever undertaken in the UK, the deal will see Alstom maintain them until 2026 alongside a new train fleet recently ordered from Hitachi. The overhaul will focus on onboard facilities, with passengers benefitting from more comfortable seating, improvements to the shop, revamped toilets, better lighting, new interiors, and the installation of at-seat chargers and improved Wi-Fi throughout. Performance will also be improved through new maintenance programmes.

The deal will create 100 high-skilled jobs, mostly based at Alstom’s Transport and Technology Centre in Widnes, with hundreds more existing engineering jobs secured at key depots in Glasgow, Liverpool, Manchester, Oxley and Wembley. Liverpool City Region Metro Mayor, Steve Rotheram, said: „In the Liverpool City Region, we’re trying to create a fair and inclusive economy where local people benefit from investment. The Combined Authority have provided 3.4 million GBP in funding to help Alstom open their ground breaking facility in Halton. I’m really pleased that - because of this brand new facility - local people will benefit through jobs and apprenticeships for years to come through projects like this.”

On 27 November 2019 it was announced that the new operator of the InterCity West Coast rail franchise would be called Avanti West Coast („Forward, West Coast!“), the two companies involved being FirstGroup and Trenitalia, which pledged that they would deliver a service which would be „ready for today and fit for the future“, „more comfortable, reliable and greener“ on a „vital economic artery bringing cities and people closer together“. The new franchise started on 8 December 2019, taking over from Virgin West Coast.

Avanti West Coast has a new logo, created by the forpeople design agency. It is a bright orange triangle, symbolising the geographic extent of the WCML franchise (visible on the Pendolino in the accompanying photo), which serves urban centres in England, North Wales and the Scottish Lowlands. First Trenitalia is committed to delivering a range of enhancements for InterCity West Coast services and passengers will benefit from more trains, more seats, simplified fares and more frequent services. The 56 Class 390 Pendolino EMUs will be completely refurbished and fitted with 25,000 new seats, more reliable WiFi transmission and improved catering.

By 2022, there will be 263 more train services per week, with an increased range of destinations served. Moreover, new trains are also to be acquired. Fares and ticket types will be simplified with mobile phone ticketing and smartcards introduced. Stations willbe improved, with refurbished waiting rooms, better passenger facilities, more car parking spaces, and greater accessibility for handicapped travellers.

Virgin Trains has been running services on Britain’s West Coast Main Line (essentially the London to Birmingham and Glasgow corridor) since 1997, and since 2002 has been operating a fleet of 52 Pendolino Class 390 EMUs. The fleet originally consisted of 53 trains, since 390 033 derailed at Grayrigg in Cumbria on 23 February 2007, was formally written off in November that year, and was scrapped.

In 2008 the Department for Transport and Angel Trains awarded Alstom a contract worth 1.5 billion GBP for a ten-year extension to the existing maintenance regime, for four new 11-car Pendolinos and the strengthening by two cars of the formations of 31 of the existing nine-car trains, which in their original condition are 217 m long. Construction of the new 390s, which are 265.2 m long and have seats for 589 passengers, began at Savigliano in January 2010.

390 054, the first of the quartet, popularly referred to in Britain as „Extendolinos“, was delivered to the Liverpool Traincare Centre in Edge Hill on 6 December 2010. 390 055 arrived in Liverpool on 16 November 2011. The final two trains were delivered in February and April 2012.

The Class 390 Pendolinos were originally nine-car trains, the original numbers being simple, without the extra „1“. On the contrary, the „1“ in the numbering designates that this is an 11-car train. This particular train, 390 156, was delivered to Manchester Longsight on 13 February 2012 and entered service on 5 April 2012. 390 156 was also the first to be re-liveried in Avanti West Coast colours and was renamed „Pride and Prosperity“ on 9 December 2019 to celebrate the launch of their operations.