Coradia Continental BEMUs On RE 6 From 2023 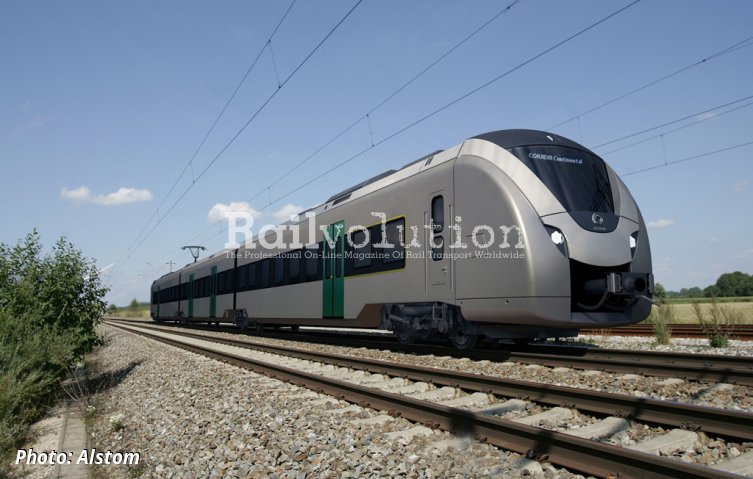 On 4 February 2020 Zweckverband Verkehrsverbund Mittelsachsen (ZVMS) announced that it ordered 11 three-car Coradia Continental EMUs fitted with traction batteries. This was result of negotiations started in September 2019, when on the 27th ZVMS announced its plans to use from December 2023 Alstom-built BEMUs on the RE6 Chemnitz - Leipzig line. The preparations were carried out jointly together with Zweckverband für die Nahverkehrsraum Leipzig (ZVNL).

The new 56 m long Coradia Continental BEMUs will have 150 seats, nine of them in the 1st class, and will include spaces for six bikes. The three-car units will be air-conditioned and barrier-free, and will run in multiple during the day. Their top speed will be 160 km/h, i. e. 20 km/h more than that of the existing diesel powered stock (Eurorunner-hauled rakes with a maximum speed of 140 km/h), thus the travel times will be shortened significantly. This means that more connections in Leipzig and Chemnitz can be achieved.

The new BEMUs will look like those Coradia Continental EMUs already operated on lines to Dresden, Riesa and Zwickau. However, they will also have high-performance batteries on the roof. These are to be charged at the Chemnitz and Leipzig stations using the pantographs, with a charging time of half an hour. Once the Chemnitz - Leipzig line will be modernised (to double-track) and electrified, expected in 2028, the batteries becomes superfluous and the trains will run with the usual pantographs.

For the procurement of new BEMUs is responsible VMS (Verkehrsverbund Mittelsachsen), which took a loan of 50 million EUR. On 4 February 2020 it was announced that VMS closed a funding gap of 7.5 million EUR with the help of its own funds. The gap was created because the association has not yet received the millions promised by the Saxon State Ministry for Economic Affairs, Labor and Transport (SMWA, Sächsische Staatsministerium für Wirtschaft, Arbeit und Verkehr) for the purchase. On 4 February the ZVMS has been commissioned to purchase eleven Coradia Continental BEMUs and the purchase contract worth approximately 100 million EUR has been signed that day.

The new trains will be built at Alstom Salzgitter works. The battery traction system will be designed and supplied by Alstom’s traction centre in Tarbes. In 2014, Alstom had signed a contract with VMS for the delivery of 29 Coradia Continental EMU. In order to bridge the 80 km of non-electrified line between Chemnitz and Leipzig, the authority requested a battery-electric version. The new BEMUs will offer a possibility to run of up to 120 km on non-electrified sections in the battery mode.