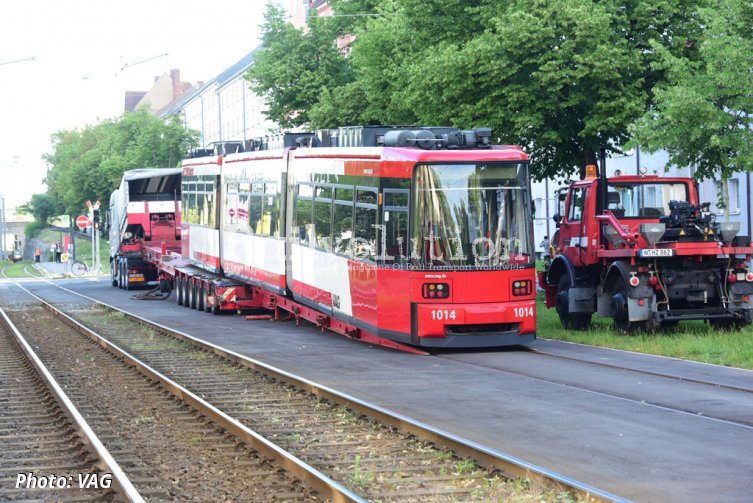 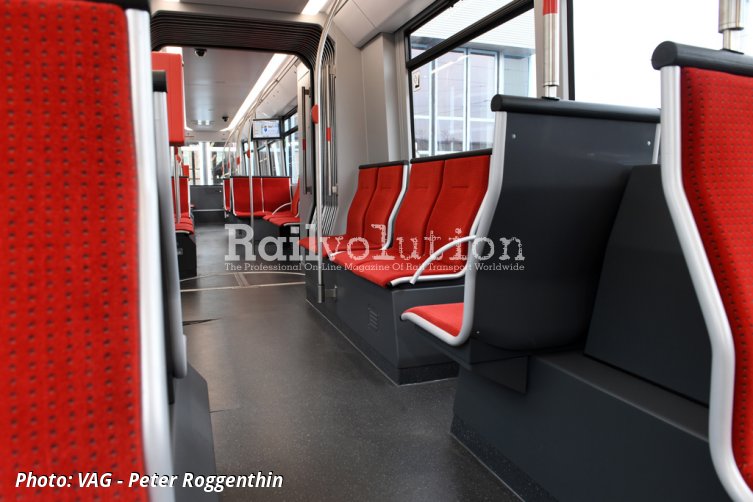 On the morning of 30 June 2020 VAG’s final modernised GT6N tram (1014) returned from IFTEC Leipzig, work on the comprehensive batch modernisation having started in September 2016. IFTEC, a joint venture of Leipziger Verkehrs-betriebe and Siemens, specialises in rail vehicle maintenance, modernisation and refurbishment.

Here the three-section tram was completely dismantled, the inter-section bellows gangways and the electrical connections between the sections were removed and replaced with new ones, and the same was done with the joint bearings. The bodyshell and all other metal components were scrutinised for corrosion, and where this was found it was remedied.

All exterior lighting, such as headlights and rear lights, and direction indicators, were replaced by LEDs. The passenger accommodation has been refurbished to meet today’s expected standards. Two lighting strips are now provided, instead of one, on the ceiling. The seats have new red upholstery and have been reconfigured, some now mounted longitudinally to the direction of travel.

The reconfiguration has resulted in more space being available for standees and for passengers moving up and down the length of the vehicle. The end result is that the accommodation not only looks brighter, but feels more spacious. All the entrance doors were fitted with touch-sensitive edges, to prevent passengers getting trapped when the doors are closing. So sensitive are these edges that they can even detect the presence of dog leads.

Once the refurbishment was complete, the tram was repainted into its red and white livery and then it was sent from the IFTEC works back to Nürnberg. All the movements between Nürnberg and Leipzig were realised by low-loader. The bogies had been subjected to a separate examination and overhaul in VAG’s own works in Nürnberg. The consortium manager of the conversion was Kiepe Electric, which partly carried out some of the work.

VAG tram depot project manager Wolfgang Langer is pleased that this project was finished: „It took longer than we originally thought, but in the end we only saw what really needs to be done than the vehicles largely were dismantled. In addition, the corrosion damage was particularly pronounced from vehicle to vehicle. We now have more than two years of experience with the first modernised vehicles. They run reliably, look better than before, and offer passengers and drivers greater comfort. Now, the 26 four-car trams will be modernised over the next few years."

In May 2016 VAG Verkehrs-Aktiengesellschaft Nürnberg awarded a 24 million EUR contract to a consortium led by (then) Vossloh Kiepe of Düsseldorf and participated in by IFTEC to modernise 14 Type GT6N and 26 Type GT8N trams, built between 1995 and 2000 by Adtranz and Siemens. The modernisation programme is scheduled for completion by January 2022. It is reckoned that the cost per tram is substantially lower than that involved in buying new vehicles, and moreover the refurbished trams will have their working lifespans extended for between 15 and 20 years, thus enabling to clock up a further million km in service.