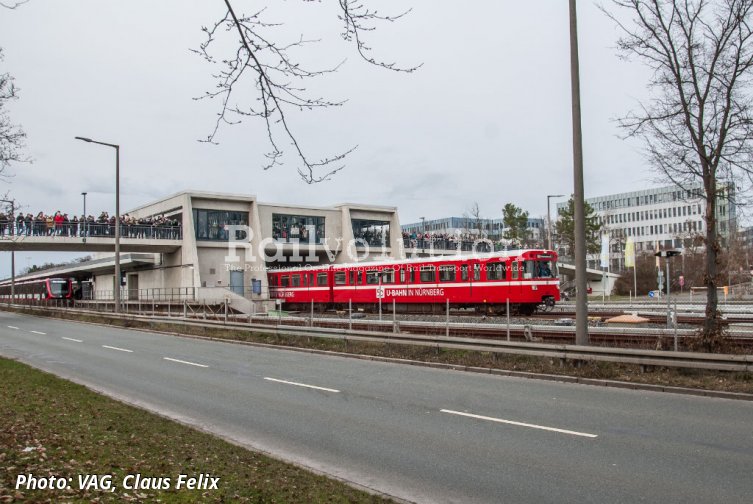 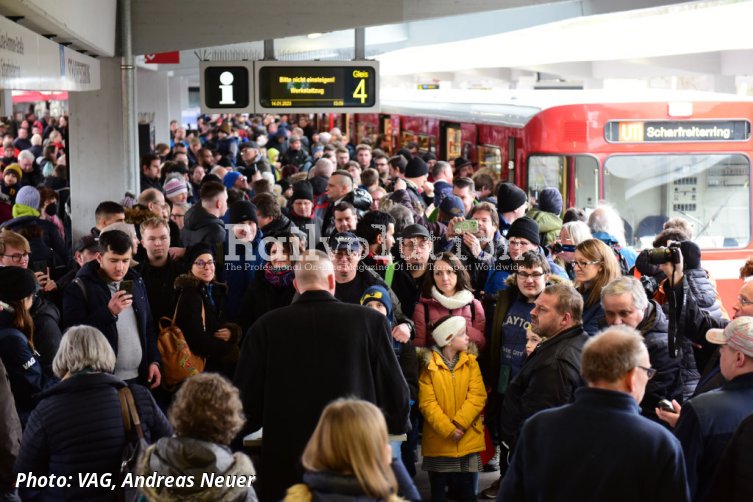 The last two underground trains of the first Type DT1 have been retired from active service by VAG Verkehrs-Aktiengesellschaft. Unlike 62 other trains of this generation, VAG will continue to maintain these two vehicles and use them for special events, rent them out, but also run them in everyday service to grease the tracks.

VAG did not want to take the "Pegnitzpfeil" trains (Pegnitz Arrows), as they have often been affectionately called, out of service without a sound after 50 years of faithful service, which is why the two units were once again in passenger service as scheduled trains on Saturday, 14 January 2023. During their journeys, they were guaranteed attention.

A Bit Of History

On 24 November 1965, after years of discussion, the Nürnberg City Council decided in favour of a classic underground railway, which was to run largely underground on its own track. What many people do not know: The "U" stands for „unabhängig“ (independent) and not for „ unterirdisch“ (underground). In the summer of 1966, the city council decided to join the Münchener Verkehrsbetriebe's considerations for the underground trains and to procure uniform vehicles together with München.

With this decision, the width and length were fixed. The single „Doppeltriebwagen“ (DT, two powered cars coupled together in an unit) was to be 2.90 m wide and 18 m long. While  München had decided to couple up to three DTs due to the higher forecast of passenger numbers, Nürnberg limited itself to two, which were to run not only as „Kurzzug“ (short train, i. e. two cars) but also as so-called „Langzug“ (long train, i. e. four cars). From the beginning, the platform and car heights were optimally coordinated so that people in wheelchairs could board the train partly without assistance.

The first two DTs were delivered to VAG on 4 November 1970 from the manufacturer MAN in Frankenstraße over railway tracks directly to the new Langwasser underground depot. Subsequently, the workshop staff and the first drivers familiarised themselves with the trains.

Over the years, VAG has received a total of 64 Type DT1 units. The first delivery consisted of 14 vehicles, most of which were short trains. These, like 18 other vehicles, had a DC drive. The third batch, which went into service between 1979 and 1984, was equipped with a much more robust and efficient three-phase drive. With this, VAG definitely wrote technological history. It was the driving force behind this innovation, which only had operational advantages because electricity could be recuperated into the third rail during electric braking. The trains with DC and three-phase transmission could be coupled together.

The DT1 vehicles proved to be extremely robust and durable. They ran between 3.5 and 4.5 million kilometres. This mileage is only possible because they have been cherished and cared for by the team at the rail vehicle workshops for over five decades.

VAG started looking into a replacement strategy for the old DT1 trains as early as 2010. A long planning and procurement process followed, and at the end of last year VAG was finally able to put the last of 35 new „Gliederzüge“ (G1, articulated trains) into passenger service. Until then, however, the trains from the 1970s had to be used as long as possible, both economically and technically.

With the foreseeable use of the G1 trains, the workshop dispensed with repairs to the DT1s that were not absolutely necessary and thus avoided unnecessary costs. All Pegnitz Arrows - except for one unit, which was destroyed by fire - were able to remain in service until the planned end of their lives thanks to good maintenance. The vehicles of the first batch were professionally recycled from 2010 onwards, as in the past years successively with the commissioning of G1 vehicles, those of batches 2 and 3.