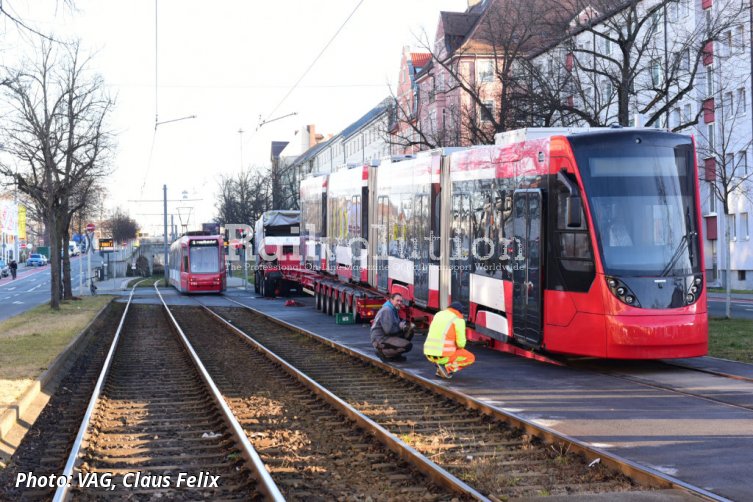 On 25 February 2022, the first Avenio was unloaded from the low-loader in Nürnberg. VAG has ordered a total of 26 trams from Siemens Mobility. They are produced in Kragujevac, Serbia. The tram in question is the third one of the batch, having the number 2003.

The first two vehicles, 2001 and 2022, have been at the Siemens test centre in Wegberg-Wildenrath since the end of November 2021 and the beginning of January 2022. This is where the commissioning by Siemens Mobility takes place. For example, dynamic tests and double traction tests are made as part of the approval process.

In the next few weeks, Avenio 2003 in Nürnberg  will be commissioned by Siemens Mobility. Necessary routine tests will also be carried out. VAG will then use the tram to train the workshop and drivers teams. In mid-April at the earliest, the new tram will be tested on the VAG network for the first time, at night, for the inspection of the loading gauge and for brake tests. During the day, the Avenio will be seen for the first time from May. In autumn, it is planned that Avenio 2003 will be available for operation and the first passengers will be able to board.

The fourth tram, 2004, is currently being assembled and will arrive in Nürberg by low-loader in April. At the moment, two more Avenios are under construction. Trams 2001 and 2002 will remain in the PCW until early summer, until all type tests have been completed.