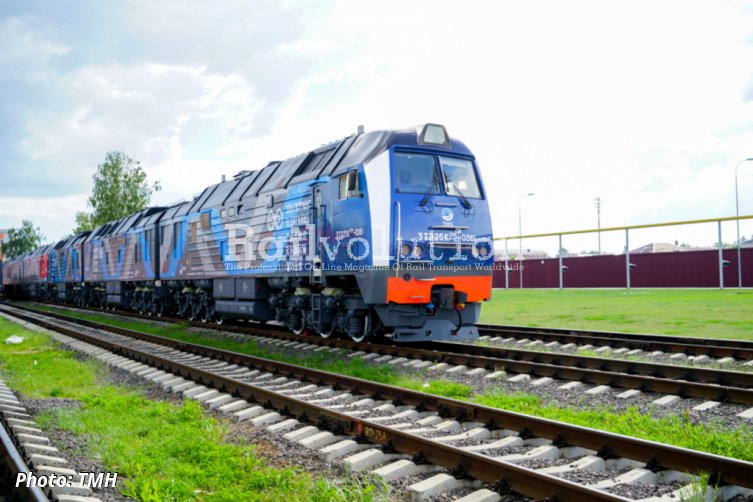 On 16 July 2021, TMH announced that Elga-Trans has started operation of the first three Class 3TE25K2M diesel locomotives at EUK (Elginsky Ugolny kompleks, Elga coal complex), based in Yakutia, south-eastern Siberia. Elga-Trans is part of the ElgaUgol (ElgaCoal) mining group, which includes companies focused on mining, processing, transporting and selling high-quality coking coal. EUK is the largest coking coal deposit in Russia, and is served by the Ulak - Elga line, which connects it to the Baikal-Amur line (BAM).

ElgaTrans signed a contract for a batch of six of these Bryansk-built locomotives in May 2021. The first to be delivered were 3TE25K2M-0061 to 0063, which started testing at BMZ on 9 June, with the remaining three to be delivered by September. Under negotiation are currently the terms of the contract for their maintenance by the manufacturer, or more precisely by TMH PRO (TMH Promyshlennye reshenia, TMH Industrial solutions).

This is the first case when Class 3TE25K2M locomotives were delivered to an operator other than RZD. They were designed to run heavy trains in harsh climatic conditions and have been in regular service since the beginning of 2020: there are now over 60 of them (as of early July) in the Komsomolsk-na-Amure depot (DVZhD, Dalnevostochnaya zheleznaya doroga, Far Eastern Railway).

Elga-Trans is to haul trains weighing up to 7 100 t soon (25 % more than at present), with the first train weighing over 7 000 t running there on 9 March 2021. This is in the context of the increasing volume of coal shipments from the Yakutia deposit, as ElgaUgol plans to increase coal production here to 45 million tonnes annually by 2023. To this end, the Ulak - Elga line is now being upgraded, allowing up to 15 trains daily, compared to five currently.