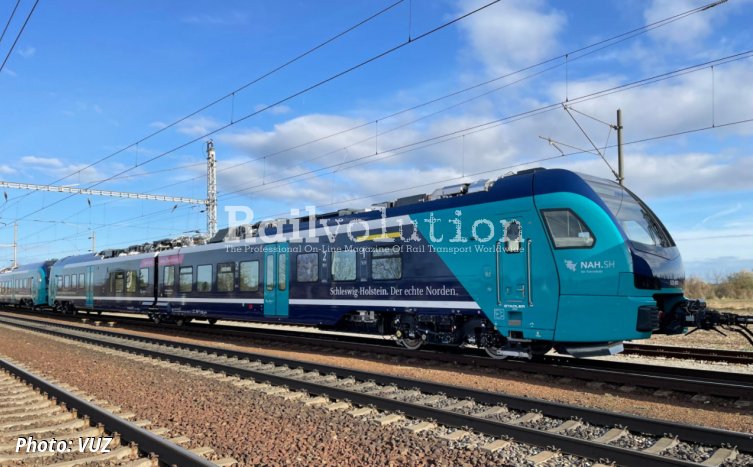 On 8 April 2022, FLIRT AKKU units arrived at the VUZ Velim test centre, which are destined for NAH.SH (Nahverkehrsverbund Schleswig-Holstein), which ordered a total of 55 of these two-car vehicles in June 2019.

Their maximum speed is 160 km/h and they are capable of running on 15 kV 16.7 Hz under catenary or on non-electrified stretches of line where they use their traction batteries. One set of them is installed under the floor and two others on the roof. The batteries are housed in special containers that protect them from fire and allow easy replacement.

They are recharged either from the catenary or from the EDB while braking, or externally from a 1 kV cable (e.g. at depots) or from a 3x 400 V socket. Up to four FLIRT AKKUs can be operated in multiple.

The two FLIRT AKKUs in Velim are the first two vehicles of the batch, 526 001 and 002, and they are currently on a test campagne, which includes a regular type test of the driving behaviour. They are planned to stay in Velim until June 2022, and they will be the only FLIRT AKKUs to be tested there. The first units will go into regular passenger service in Schleswig-Holstein from spring 2023.