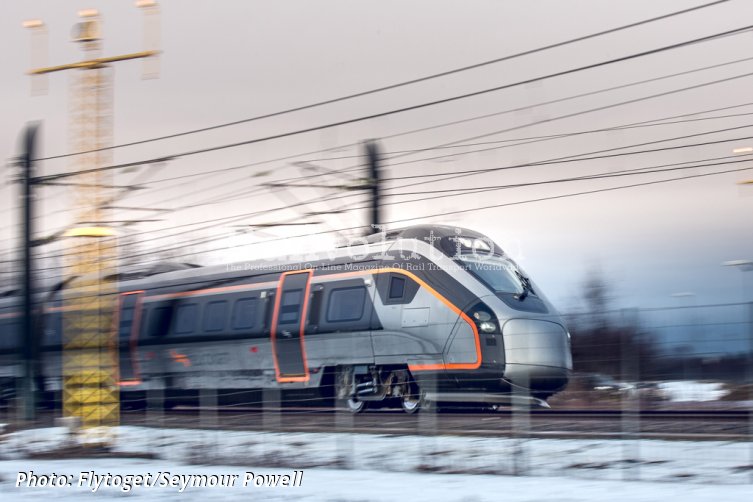 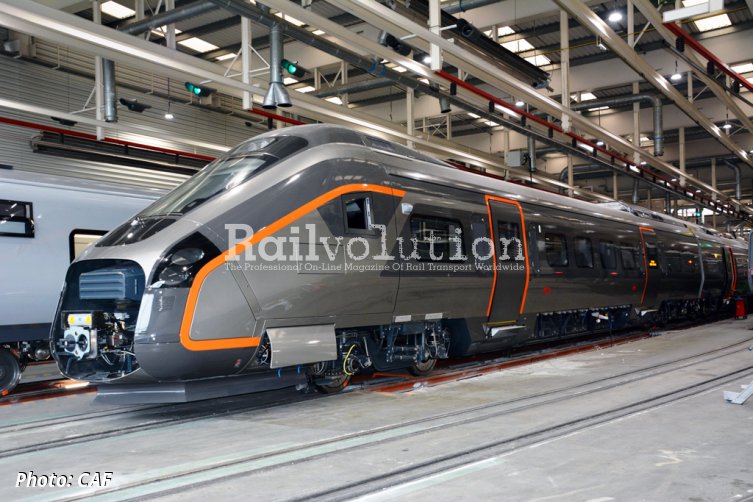 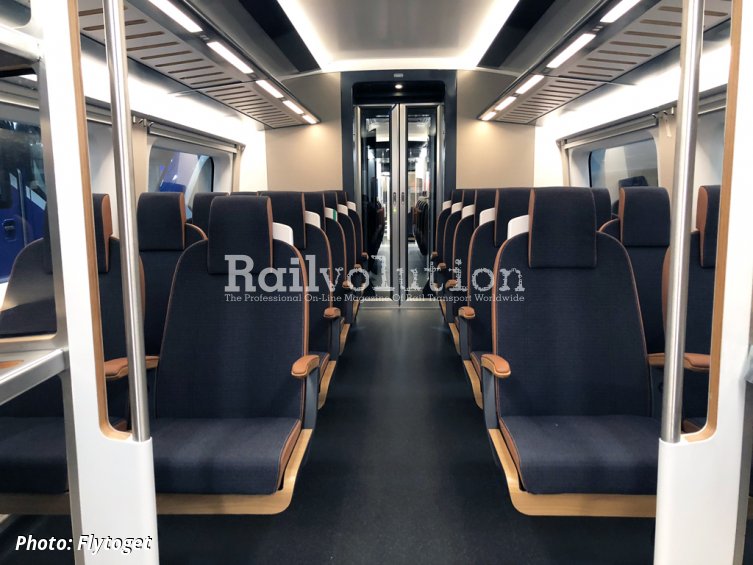 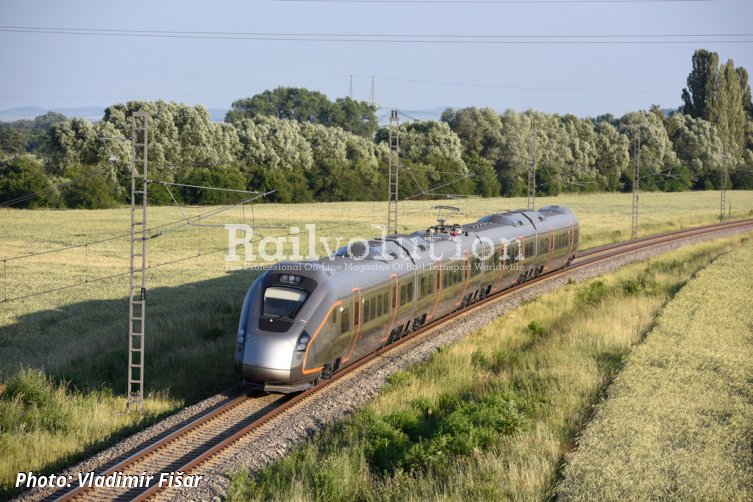 In March 2015 Flytoget awarded CAF a 118 million EUR contract for eight four-car 245 km/h trains for its express services linking Gardermoen airport, Oslo Sentrum and Drammen. This was the first (and until now the only) commercial order to be built using a design derived from CAF’s Oaris EMU, the four-car variable-gauge Class 105, prototype of which was built between 2010 and 2011 and which started dynamic testing on the Spanish high speed network in October 2011.

The new Flytoget trains are designated Class 78. Flytoget currently operates these services using 16 210 km/h Class 71 EMUs, built by Adtranz’s Strømmen works (now owned by Bombardier) in 1997 - 98. The Class 78s operate off 15 kV AC 16.7 Hz, are rated at 3,560 kW, and have a Bo’Bo’ + 2’2’ + 2’2’ + Bo’Bo’ axle arrangement. They are 102 m long over couplings and weigh 236 t tare. Like the Oaris prototype, they have aluminium bodyshells, though each car has two pairs of single-leaf, 1,200 mm wide entrance doors (the entrance door configuration of the prototype, designed for long distance services, is slightly different). One of the cars is low floor. Seats, ten of which are tip-ups, are provided for 248 passengers.

The 245 km/h top service speed reflects the fact that the new line between Oslo and Gardermoen, built between 1994 and 1999 and inaugurated on 22 August of the latter  year, was designed as a high speed line. Some stretches of it run parallel to the original main line from Oslo to Hamar and Trondheim, and Gardermoen station is a through station, enabling it to be served by trains from Oslo and Drammen to Eidsvoll, Hamar and Trondheim. Flytoget, when asked in 2018 whether the Class 78 would be able to make use of their 245 km/h capabilities, replied, „at this point we do not have any estimation of when the line between the airport and Oslo might be upgraded to a higher speed than 210 km/h.“

When the contract was signed, it was anticipated that the first Oarises would be delivered for testing in 2016, and the remainder in 2018. In summer of the latter year it was expected that the first train will be sent to Norway for testing in October 2018, and the remainder will be ready for putting into service at the time of the December 2019 timetable change. In fact, the first Class 78 EMU arrived in Norway in the second half of February 2019, with a presentation event held on 5 March in Flytoget’s Grorud works.

The need for the Class 78 EMUs was prompted by the provision of Terminal 2 at Gardermoen, whose construction started in 2011, with inauguration in April 2017. In the latter year the airport was used by nearly 27.5 million passengers, and this number is expected to increase still further. Once the Class 78s are in service, they will run in multiple, as will the Class 71s, resulting in a substantial increase in passenger capacity, while maintaining the current service frequency with departures from the airport and Oslo Sentral every ten minutes. Every other train is extended from Oslo Sentral to Drammen and back. Flytoget carried around 6.6 million passengers in 2017, averaging around 18,000 per day.

Flytoget is not the only provider of train services between Gardermoen and Oslo. NSB offers three departures per hour using FLIRT EMUs, journey time for the 52 km run to Oslo Sentral being 23 minutes, with a single fare of 109 NOK (around 10.5 EUR). By way of comparison Flytoget trains take 19 or 22 minutes (every second train stops at Lillestrøm and is thus slower), and the single fare is substantially higher, at 198 NOK (around 19 EUR).

Flytoget was founded in 1992, originally as an NSB subsidiary, NSB Gardermobanen. Construction of the new railway ran into difficulties, especially with the 14,580 m long Romeriksporten tunnel, through complicated geological strata, and costs rose, resulting in the subsidiary accumulating debts. In the end Gardermobanen was rebranded Flytoget, put under direct State control, and since 2004 has been 100 % owned by the Ministry for Trade and Industry (Ministry of Trade, Industry and Fisheries since 1 January 2014).

We asked Flytoget:
1) how many trains were built so far?
Answer: „The eighth unit is close to completion and will be finished before the summer.“

2) how many trains are in Norway now? „At the moment there are four units in Norway. They are being used both for testing and staff training.“

3) what is the reason for such a huge delay in Class 78 deliveries?
„Without detailed knowledge of the project it might seem to be a major delay, but taking into account the complexity of developing purpose built trains for the airport express service, the picture is somehow different.
CAF and Flytoget have been working closely on developing a customer focused train taking care of all the needs of airport travelers. In addition the introduction of the first ETCS Baseline 3 compatible train in Norway have proven to be a challenge. Attention to every detail and a continued strive to achieve perfection in every aspect has taken its time. Also the testing, performed in several different countries and on several different locations have been time consuming.“

4) when do you expect the start of regular service?
„The final approval for use on the Norwegian infrastructure is expected this year with a gradual introduction in service early 2021. Using the units in regular service depends on several different factors, not only is it dependent upon the final approval but training, maintenance, spare parts, planning, workshops etc. must be fully sorted out before we are ready to invite the first customer on board.“