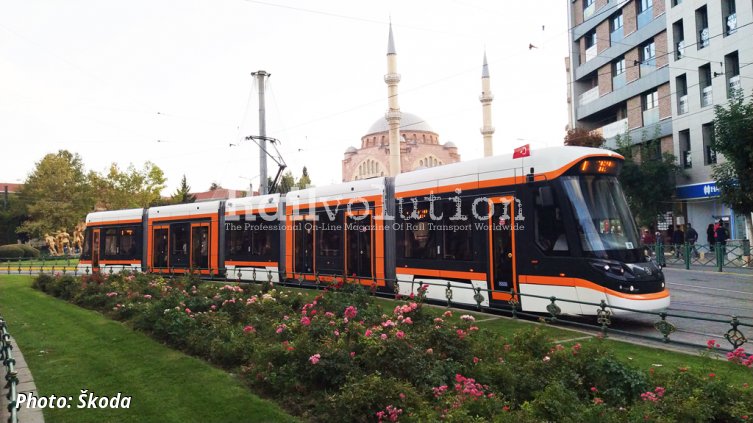 In October 2020, Škoda-built ForCity Classic trams in the Turkish city of Eskişehir achieved 2 million kilometers  over two years of operation. The order for Eskişehir is one of a number of export deliveries of trams, which go to a number of countries around the world from the Plzeň-based company - Germany, Italy, Slovakia, Hungary and Turkey, for example.

As elsewhere, in the case of the Turkish city Škoda service is also part of customer service. "Our trams in Eskişehir reached 2 million travelled kilometers in just two years of their operation, and thanks to the reliable service, the operator is very satisfied with the vehicles. Warranty services are provided by a permanent service group of our specialists in Eskişehir, who work with colleagues from the local transport company," says Škoda Transportation Service Manager Matěj Mottl.

Specifically the Turkish market is very interesting to Škoda Transportation. In Konya, the ForCity Classic trams are in service since 2015 (60 trams together with twelve battery-powered ones). "In addition, in late October our owner PPF Group completed the acquisition of a 50 % stake in Turkish vehicle manufacturer Temsa. We are currently actively developing a significant synergy with our sister company. We are preparing a comprehensive business and product strategy for our mutual cooperation in individual markets," adds Chairman of the Board of Directors and President of the Škoda Transportation group, Petr Brzezina.

In March 2018 the first Type 18T ForCity Classic tram was delivered to Eskişehir, being the first in a batch of 14 ordered for 26 million EUR on 5 September 2016. The whole batch was numbered from 34 to 47. All these five-section, uni-directional trams are 100 % low floor, metre gauge, 30,080 mm long, 2,300 mm wide and 3,500 mm high above rail top. They are mounted on three bogies, two powered and one non-powered, which offer a very limited pivoting function, the axle arrangement being Bo’ 2’ Bo’. Each of the powered bogies has two 100 kW asynchronous traction motors giving the tram a power rating of 400 kW. Since 1 km of line in Eskişehir is without 750 V DC catenary, batteries are also installed, to give the trams an autonomy of up to 5 km.

The passenger accommodation and driver’s cab are fully air conditioned. Seats are provided for 41 passengers, and there is space for up to 176 standees, at a crush density of six per m2. There is also one wheelchair harness point. There are four double-leaf and two single-leaf entrance doors, threshold height being 330 mm above rail top.
One of the trams was also tested on the metre gauge network in Bratislava, which is electrified at 600 V DC. This is because of its proximity to Plzeň, and also because maintenance facilities exist here for the 60 Škoda-built Type 29/30T ForCity Plus trams which were delivered there between 2014 and 2016.

Construction of Eskişehir’s tramway network began in August 2002 and the first lines were inaugurated in December 2004, further extensions being inaugurated in 2014. 33 FLEXITY Outlook trams were initially supplied by Bombardier. The network now consists of seven lines.